Ireland scrapped to a 13-point victory over a feisty Georgia on Saturday in the final Group A mat...

Ireland scrapped to a 13-point victory over a feisty Georgia on Saturday in the final Group A match of the Autumn Nations Cup in Dublin.

Andy Farrell made a number of changes to his side after last week's loss to group leaders England a week ago.

With a mixture of youth and experience, Ireland looked to build confidence ahead of their final Autumn Nations Cup match against the runner up of Group B, Scotland next week.

Billy Burns ran out for his first start, while the focus was on Finlay Bealham and Andrew Porter against a strong Georgian scrum. 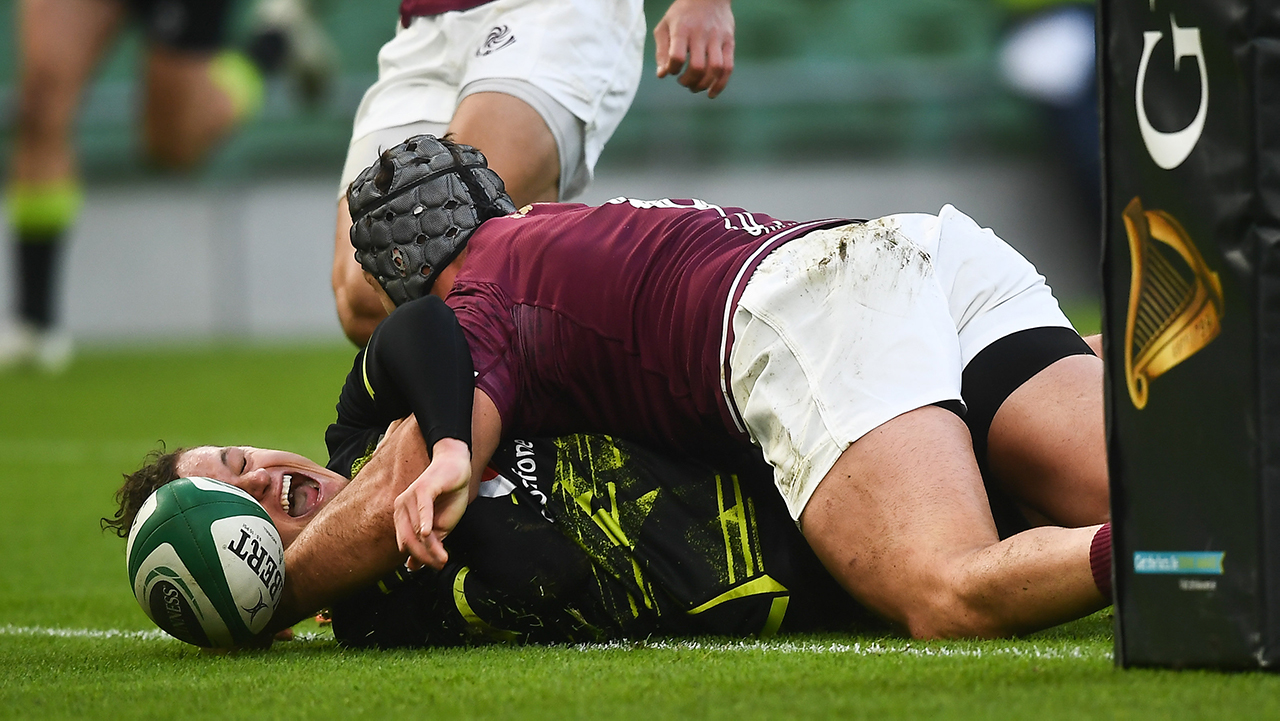 Billy Burns of Ireland scores his side's first try during the Autumn Nations Cup match between Ireland and Georgia at the Aviva Stadium in Dublin. Photo by David Fitzgerald/Sportsfile

Ireland need to be more clinical

With Ireland struggling to score more than two tries against the likes of Georgia, the team performance is in desperate need of improvement.

However, there were a number of solid performances scattered throughout the boys in green.

Bealham suffered under the pressure of the legendary Georgian scrum, conceding a number of penalties at scrum time in throughout the match. He was replaced by Cian Healy 15 minutes into the second half in an attempt to win some of their own scrums.

Herring was the key man in a much improved Irish lineout, although a lot of their ball was still sloppy at the top of the lineout. He played the full match, making a couple of turnovers, and made a stand for the starting number 2 jersey against Scotland next week.

Ireland's scrum was under severe pressure, and Porter did not do much to alleviate the pressure placed on Bealham. He was showed up on defence in the lead up to Giorgi Kveseladze's try for Georgia.

Henderson was the official man of the match on the day, and it is not hard to see why. He was instrumental in getting ireland in a strong field position in the build up to Burns' try.

He was crucial in solving Ireland's lineout struggles, competing very well on defense, winning a number of Georgian throws, and disrupting others. He showed good hands in loose play and linked forwards and backs well. 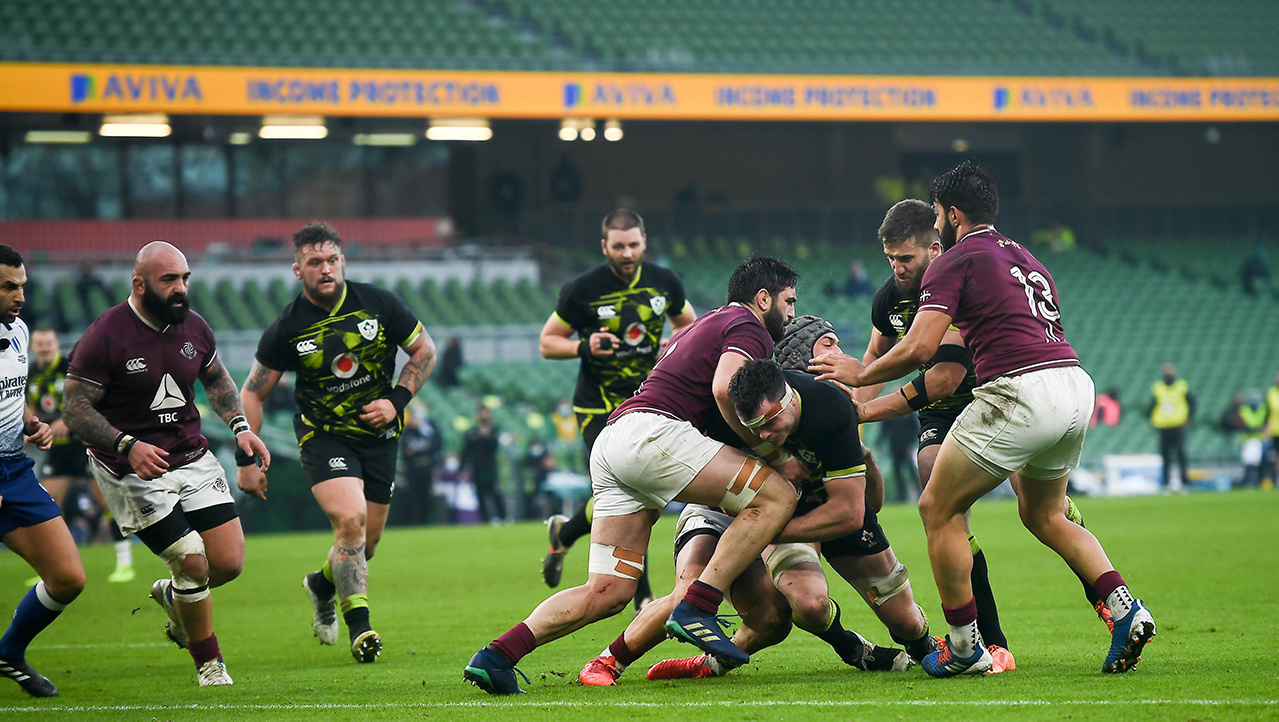 James Ryan of Ireland is tackled by Tornike Jalagonia of Georgia during the Autumn Nations Cup match between Ireland and Georgia at the Aviva Stadium in Dublin. Photo by David Fitzgerald/Sportsfile

Ryan led well from the front with a few strong carries, and ran the dummy line well to create space out wide. He helped stabilise the Irish lineout, supported well by Henderson, but his leadership was needed more in the second half to lift Ireland.

Beirne was not his usual self on defence, with an official tackle count of zero out of two attempts.  He was caught out by the dummy run which opened up the gap for Georgia to run through on the way to Kveseladze's try, but still managed to win a turnover at the ruck and assist with shoring up the lienout.

Was the go-to man for the pod to set up play out wide, although he only made a short amount of metres for his side. He attracted Georgian defenders to open up space out wide, however Ireland failed to capitalise on the overlap. 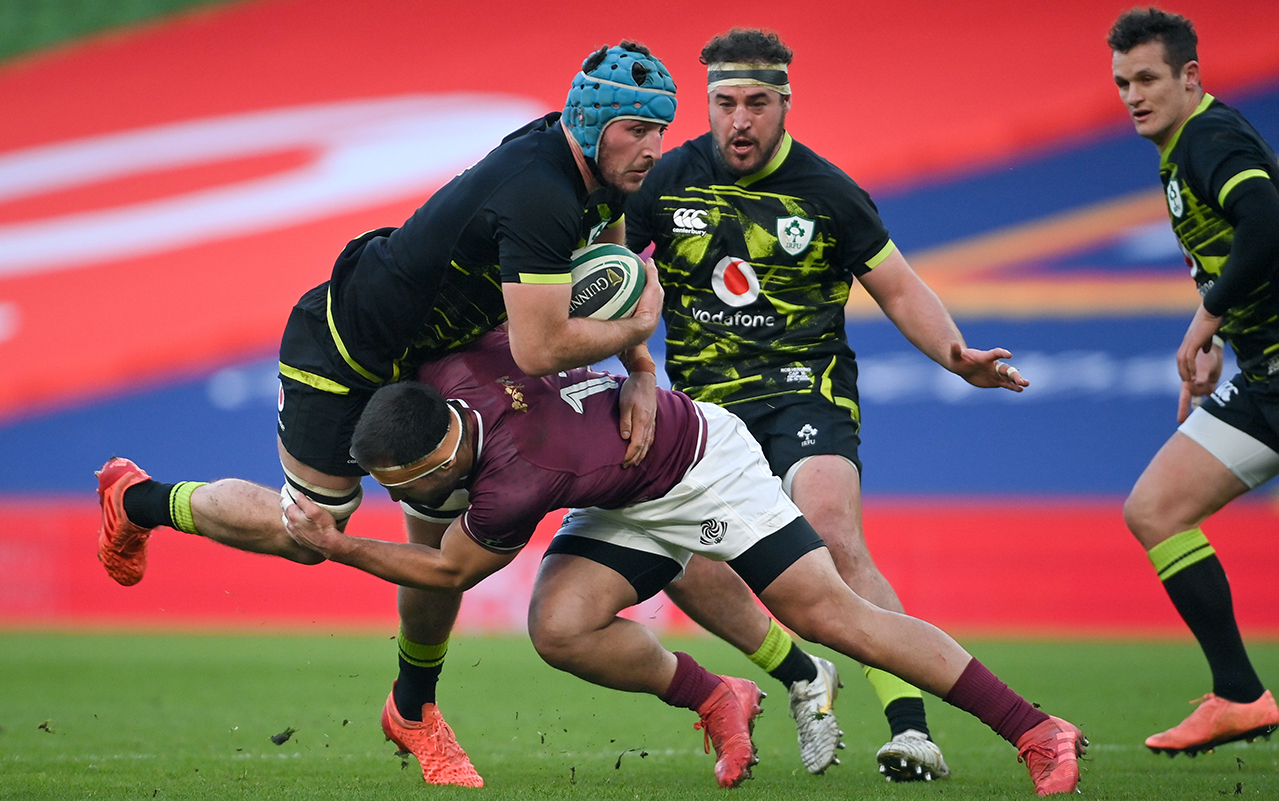 Will Connors of Ireland is tackled by Merab Sharikadze of Georgia during the Autumn Nations Cup match between Ireland and Georgia at the Aviva Stadium in Dublin. Photo by Ramsey Cardy/Sportsfile

Stander was a real contender for man of the match, with 24 carries and a massive 61 metres throughout the game. He was solid off of kick offs throughout the match, and added security to a struggling lineout. He was unlucky to be held up late in the game over the line, but will be concerned that Ireland were not able to dominate the Georgians physically.

Murray had a strong performance in his return to the Irish number 9 jersey, with improved box kicks that showed greater accuracy and variety for Hugo Keenan to chase. He was good under the occasional high ball himself, and ran the backline well with the help of the two young out halves.

Scored Ireland's first try off of a great loop play inside Chris Farrell. He scored 15 points and his ingenuity on attack was missed when he was subbed off in the 45th minute of the match. He was solid for the amount of time he was on the pitch, and his core would likely be higher if he was able to come back on.

Earls would be slightly irritated that the ball did not reach him as often as it could have. He was always looking for work, but was lost in the strong performances of those around him in the first half. 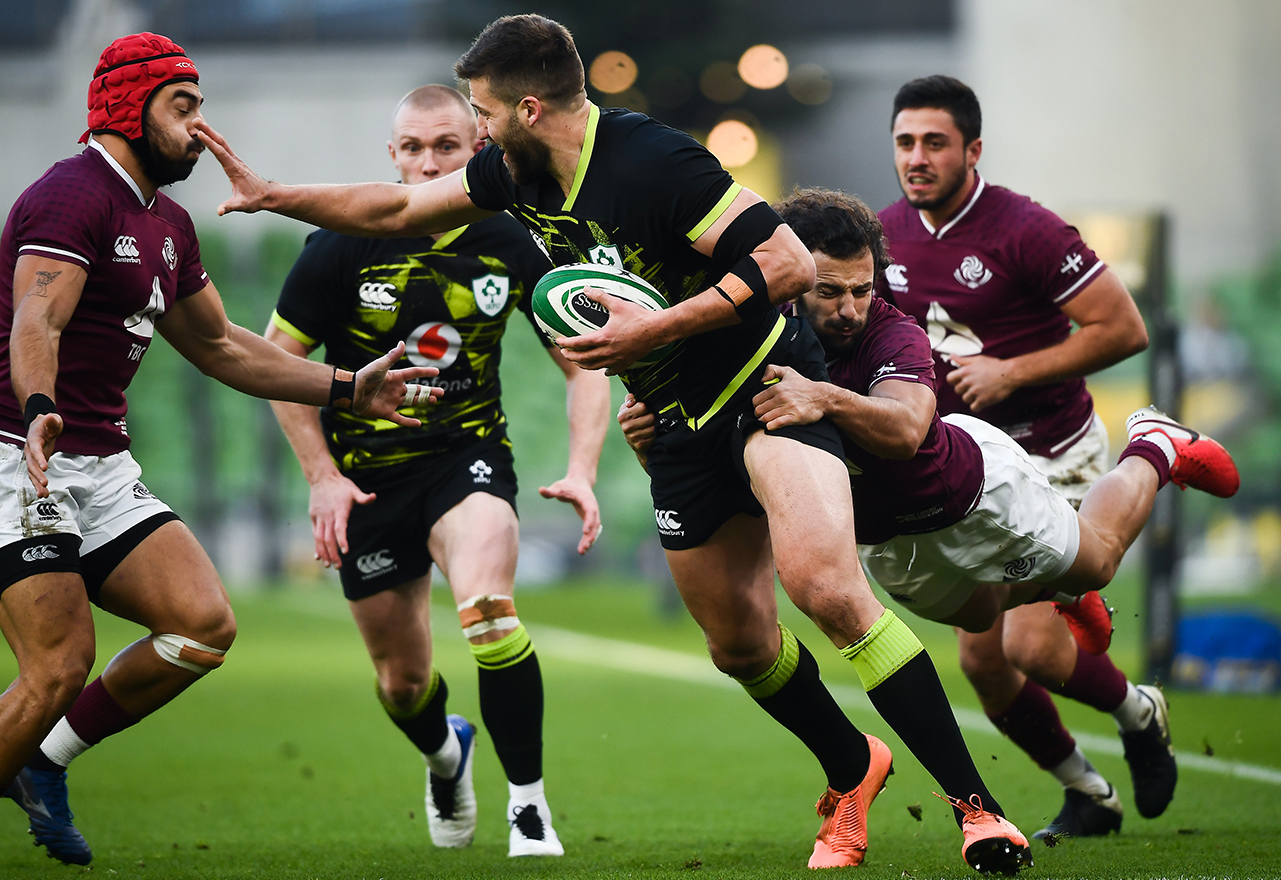 Stuart McCloskey of Ireland is tackled by Akaki Tabutsadze, left, and Soso Matiashvili of Georgia during the Autumn Nations Cup match between Ireland and Georgia at the Aviva Stadium in Dublin. Photo by David Fitzgerald/Sportsfile

Although he was denied a good try after a forward pass from Stockdale in the first ha;lf, Mcloskey reminded everyone that he has a firm bid for the inside centre jersey against Scotland. He was strong in the centre, but needs to get the ball out wide more often.

Farrell ran a great line to set up Burns for the first try of the match, but struggled to impose his physicality on the Georgian line after that. He did win two turnovers, though, and his distribution was second only to that of Jacob Stockdale. 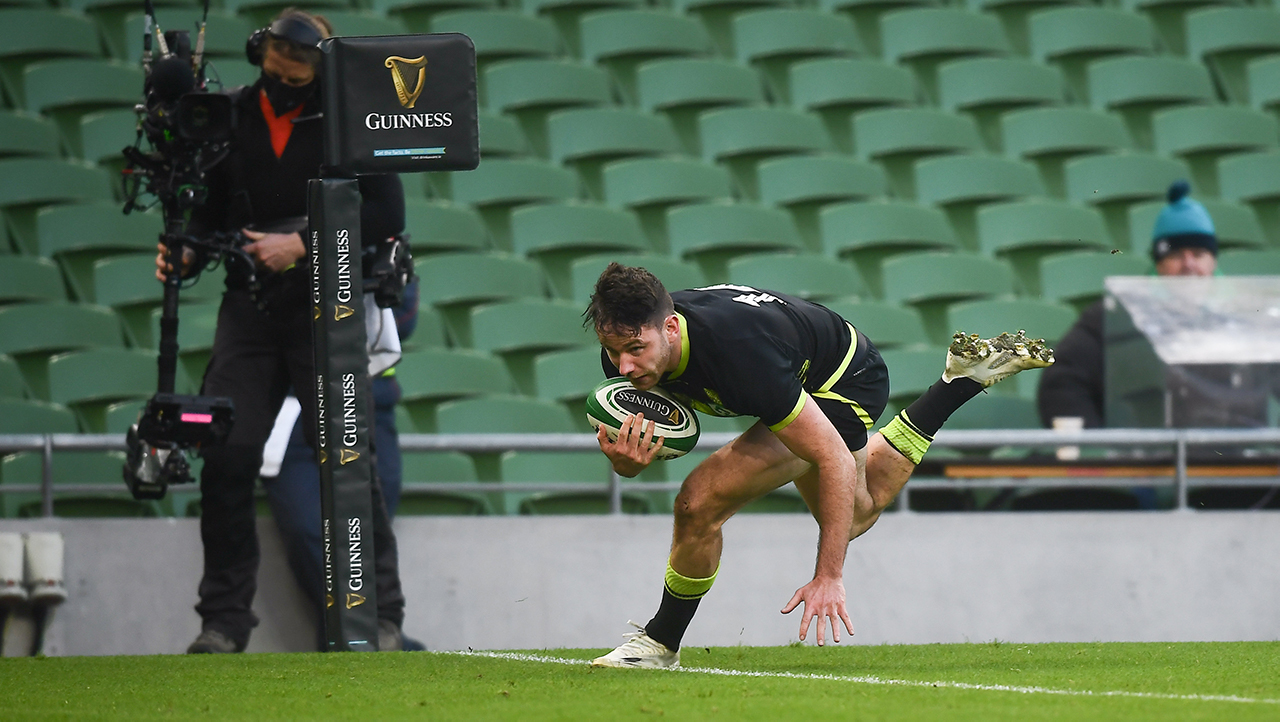 Hugo Keenan of Ireland scores his side's second try during the Autumn Nations Cup match between Ireland and Georgia at the Aviva Stadium in Dublin. Photo by David Fitzgerald/Sportsfile

Keenan was solid under the high ball, particularly chasing the accurate kicks from Murray. He finished off a well-worked team try, crossing over the line untouched, however was not allowed to reach the soaring heights of his debut.

Another contender for man of the match, Stockdale can be forgiven for his defensive laps that allowed Georgia to score. He put in a brilliant cutout pass for Keenan's try, and his second pass was unlucky to have been called back for going forward. He created a number of moments of brilliance, even if some were ruled out by the TMO.

Byrne came on for Billy Burns for an apparent head injury, and continued to run the backline with more creativity and impetus than he did last week. He made a few clever kicks in behind the Georgian defence, and helped control the possession and territory for Ireland on their way to the win.