After a heartbreaking loss to Wales a week ago, Ireland looked to get their Guinness Six Nations ...

After a heartbreaking loss to Wales a week ago, Ireland looked to get their Guinness Six Nations campaign back on track when they hosted France on Sunday.

Despite being a man up for 10 minutes of the first half, Ireland were unable to get out in front of their visitors, making a couple of errors on defence.

Although James Lowe came within millimetres of getting Ireland in the lead in the first half, France's first try came from their first real opportunity, while Ireland had a number of opportunities but could not capitalise.

The second half saw France begin to dominate, meaning that Ireland had to play from the back foot and struggled to keep their balance between territory and possesion.

With Ireland trailing by just two points in the final five minutes, the decision making to kick the ball away needed to be looked at again, as it did not gain the territory, and merely allowed France to control the final minutes of the match. 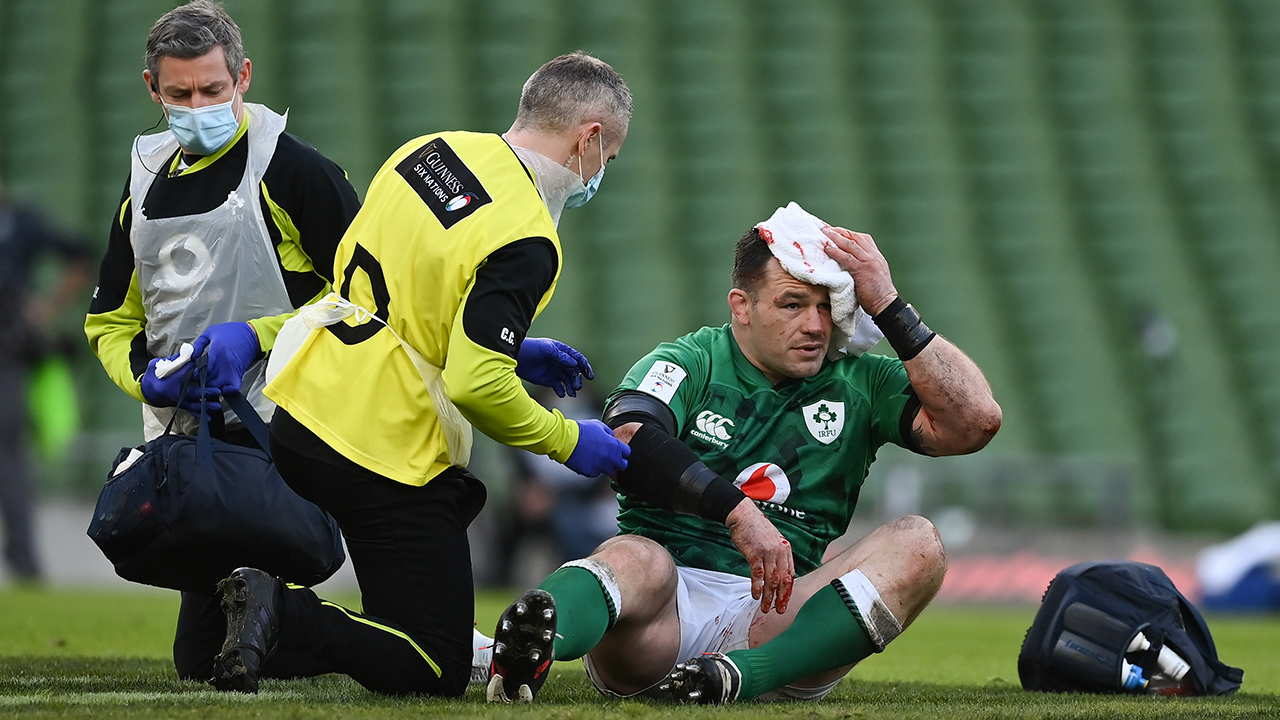 Cian Healy of Ireland is attended to prior to leaving the pitch with a blood injury during the Guinness Six Nations Rugby Championship match between Ireland and France at the Aviva Stadium in Dublin. Photo by Brendan Moran/Sportsfile

Despite going off for a blood replacement just two minutes into the second half, Healy put in a major effort on defence, putting in 14 tackles in his total of 55 minutes on the park.

For the first time in a long time, the Irish set piece is also not one of the major talking points after a heartbreaking loss, and Healy, Rob Herring, Andrew Porter and Rónan Kelleher will all be proud of that.

Herring made a couple of disciplinary mistakes throughout his 54 minutes, however he looked to fix his lineout mistakes and put together a decent performance. It did him no favours that immediately after Herring went off, Kelleher scored Ireland's only try.

Porter, much like Healy, made his biggest mark on the defensive side of the ball, making all of his 10 tackles and anchoring the scrum well. Ireland would be disappointed that they did not utilise their tight five more as ball carriers in the close channels.

Beirne only managed one big turnover throughout the match, but showed a lot of effort off the ball. He did not make the monumental impact he made last week.

Henderson helped secure the Irish lineout and frustrated the French on their ball, however he was not able to punch gaps into the French defence that he would expected to.

Henderson's ability to link the backs and forwards was on show, however his physicality was missed with his carries. 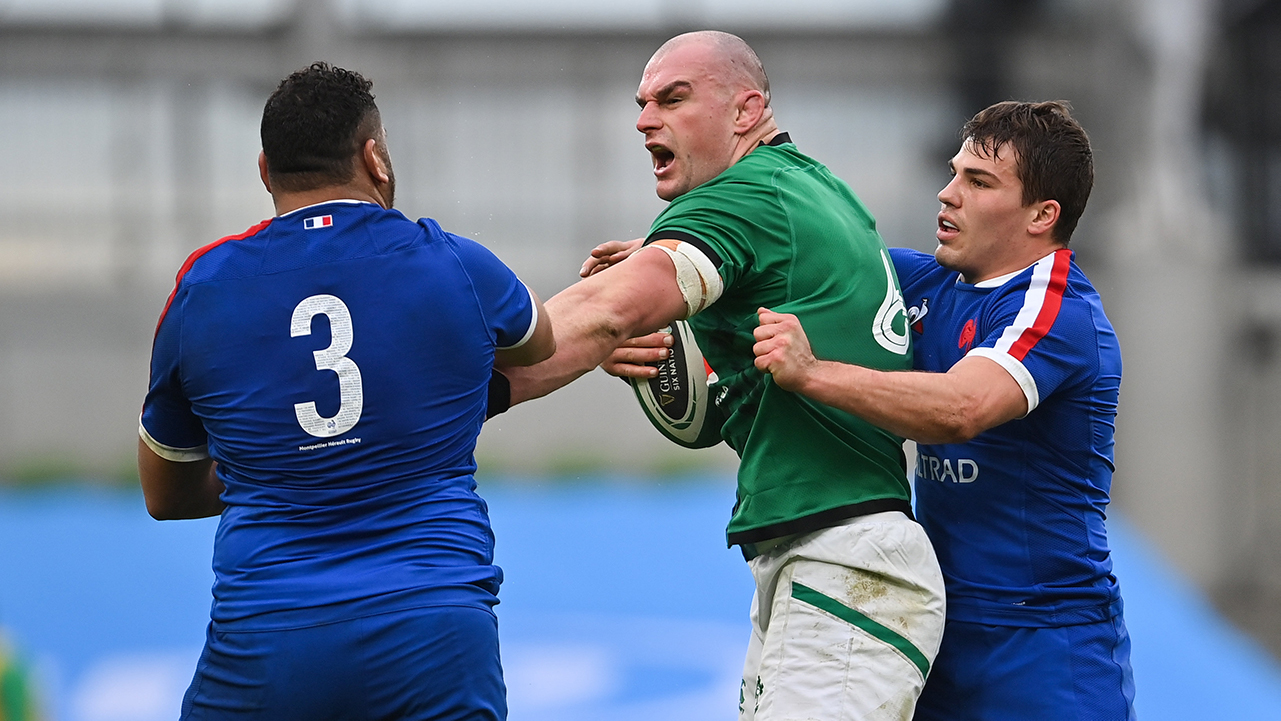 Rhys Ruddock of Ireland tussles with Mohamed Haouas, 3, and Antoine Dupont of France during the Guinness Six Nations Rugby Championship match between Ireland and France at the Aviva Stadium in Dublin. Photo by Ramsey Cardy/Sportsfile

Ruddock was not as impactful as he would have liked to have been coming in for the banned Peter O'Mahony, however his 100% defensive effort and durability with ball in hand means that he likely did enough to keep the No. 6 jersey for Ireland's clash with Italy in two weeks.

The most visible of the loose forwards on defence, Van der Flier helped organise the Irish defence for most of the match, securing the ball at the ruck and doing a lot of the invisible work off the ball so that his side can retain possession.

Stander made the third most meters for Ireland throughout the match. With 44 attacking metres off of his 19 carries, the Munster man attempted to break the French defence with his power.

He did not shirk his defensive duties either, as Stander effected an important turnover inside Ireland's half, and effected eight tackles for just one miss.

Gibson-Park looked to make use of the aerial battle, however made a number of pointless kicks early on. Was caught out on defence, allowing Charles Ollivon to go outside him for France's first try.

With five minutes left in the match, trailing by only two points, the decision making to consistently put up aimless kicks for territory that seldom worked out needs to be questioned.

Burns missed his first kick of the game, but his kicking from hand started to pay dividends halfway through the first half. He was substituted just after half time for Ross Byrne for a Head Injury Assessment (HIA). 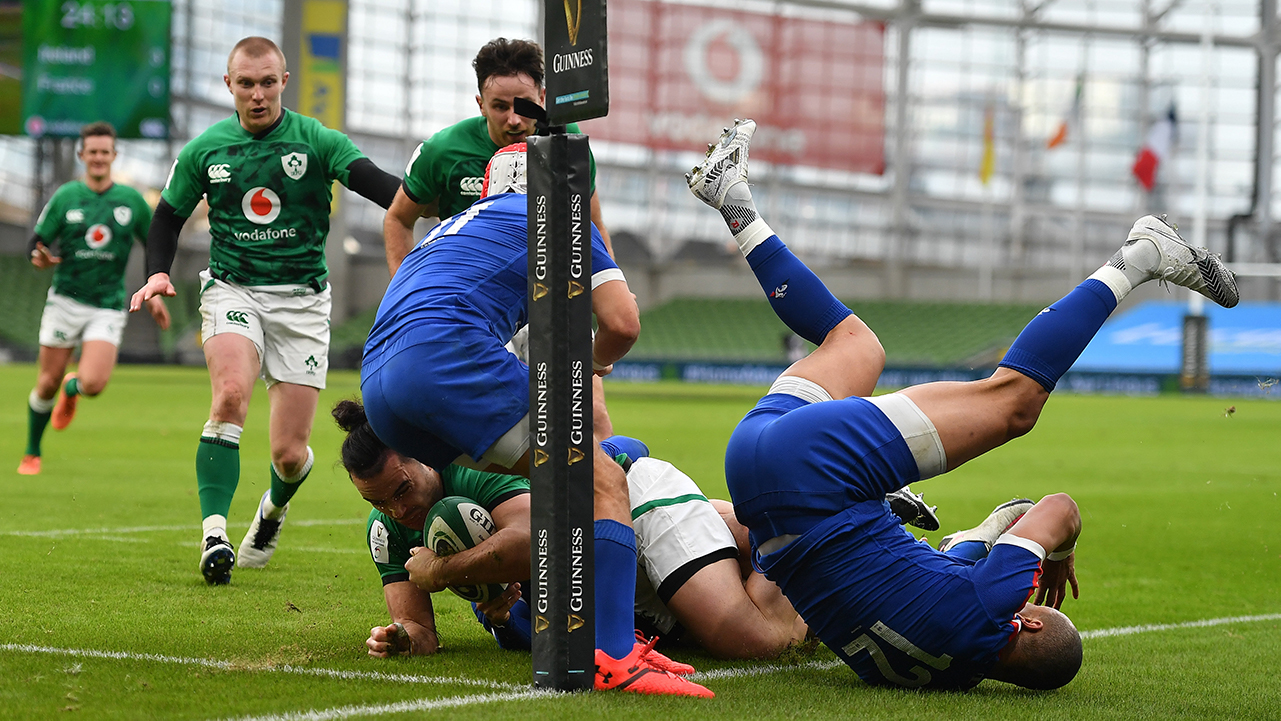 James Lowe of Ireland is bundles into touch prior to scoring a try, which was subsequently disallowed, during the Guinness Six Nations Rugby Championship match between Ireland and France at the Aviva Stadium in Dublin. Photo by Brendan Moran/Sportsfile

Lowe took the ball in the first receiver channel for much of the first half, and looked strong on attack, however failed to break the line on most occasions.

He came within millimetres of scoring the opening try of the game, but was well managed on defence by Gael Fickou, who bundled him into touch.

Ultimately, Lowe's biggest weakness was exposed on defence against France, as he made a number of defensive errors out wide.

Henshaw was kept quiet for much of the first half, instead playing off of Lowe and Earls and running their support lines. Like Beirne, Henshaw was not able to make the same impact as he did against Wales, and was unable to get the better of Gael Fickou and Arthur Vincent in the tackle, only making a total of seven meters.

Ringrose made a few good runs in the first half, gaining 32 metres by half time, and almost making the breakaway late in the half. He looked to ignite a number of impressive runs in the second half, although he either went unsupported, or was shut down in the middle of his half-break.

Like Lowe, Earls took a lot of the pressure off of Burns by taking the first receiver option for most of the first half. he found it difficult to make meters in the french defence, but always put the Irish attack on the front foot.

In his 90th test for Ireland, Earls made 42 meters, but made his biggest mark in the air, chasing the up-and-unders from his inside halves. 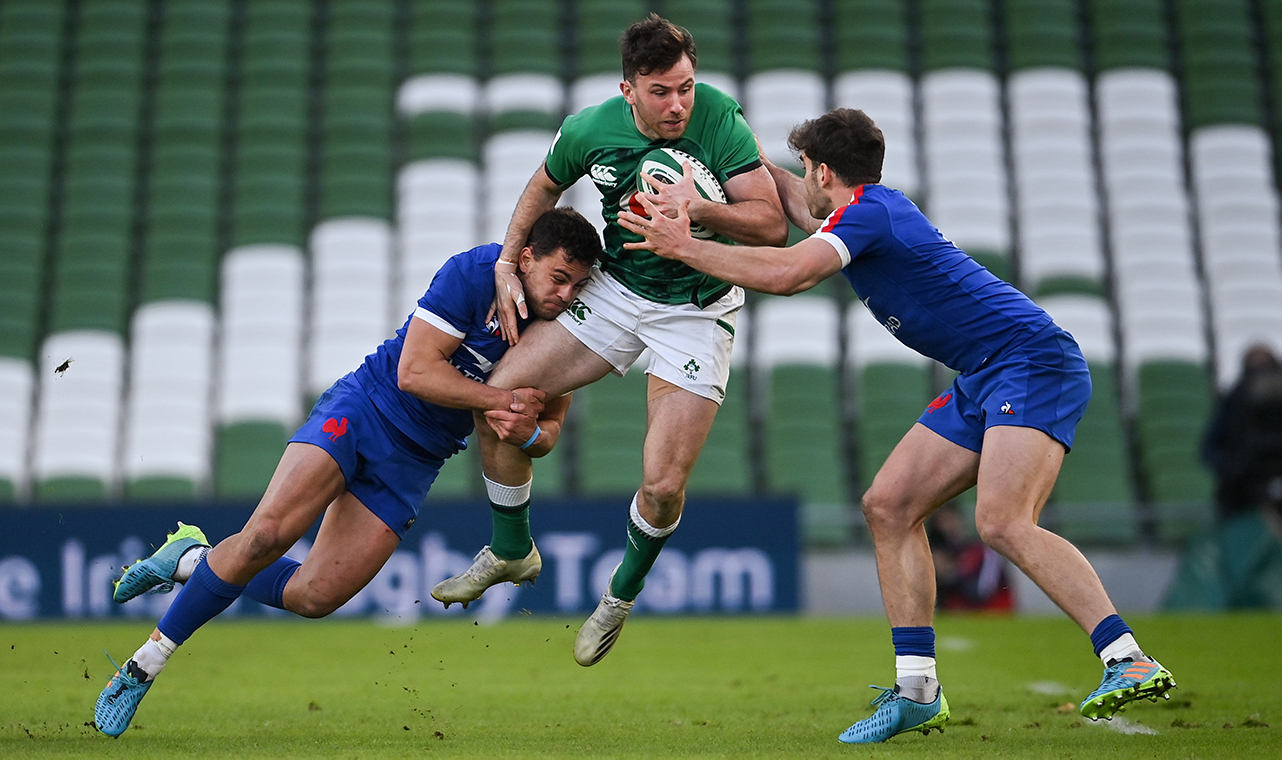 Hugo Keenan of Ireland is tackled by Arthur Vincent, left, and Damian Penaud of France during the Guinness Six Nations Rugby Championship match between Ireland and France at the Aviva Stadium in Dublin. Photo by Ramsey Cardy/Sportsfile

Keenan made a lot of Burns' and Gibson-Parks' first half kick look good with his chasing lines and competition in the air. Second only to Lowe in terms of meters made, Keenan has surely done enough to keep that number 15 jersey for the remainder of the campaign.

Ireland looked more creative with ball in hand as soon as Byrne stepped onto the pitch. He took more ball in the first receiver channel, and looked to spread Ireland's attack wider.