Andy Farrell’s men were beaten 18-7 by a dominant England side in Twickenham on Saturday, despite having the majority of territory and possession.

With all of their possession and territory, the Irish game plan seemed to simply be to run into the English defenders and hope for a breakthrough.

Jackman believes the boys in green outplayed themselves on the day. “It was a very dominant display by England,” Jackman said.

“I think the [Irish] players put in a huge level of commitment, honestly, but unfortunately the standards we expect are more than that now.

“I think, when they review that today and tomorrow, they will realise that they really ran themselves out of petrol by how they played, and they ran into England’s energy.”

England celebrated every small victory on the day, which for Jackman showed their level of desire, which Ireland could not match.

“I remember there was a clip where Johnny May got a turnover and the camera went to [Maro] Itoje,” Jackman said.

“He celebrated that moment as if it were a World Cup winning try.

“We, unfortunately, gave them too many opportunities to get those energy boosts through the game with our strategy in attack.”

Ireland controlled 68% of the possession throughout the game, with 72% territory in their favour, however, were unable to break the English line until the 73rd minute.

Jackman thinks this proves that the Irish game plan is chasing something that is no longer relevant.

“It is like, to use a racing analogy, to have a horse that is in the lead for four furlongs in a six-furlong race,” Jackman said. 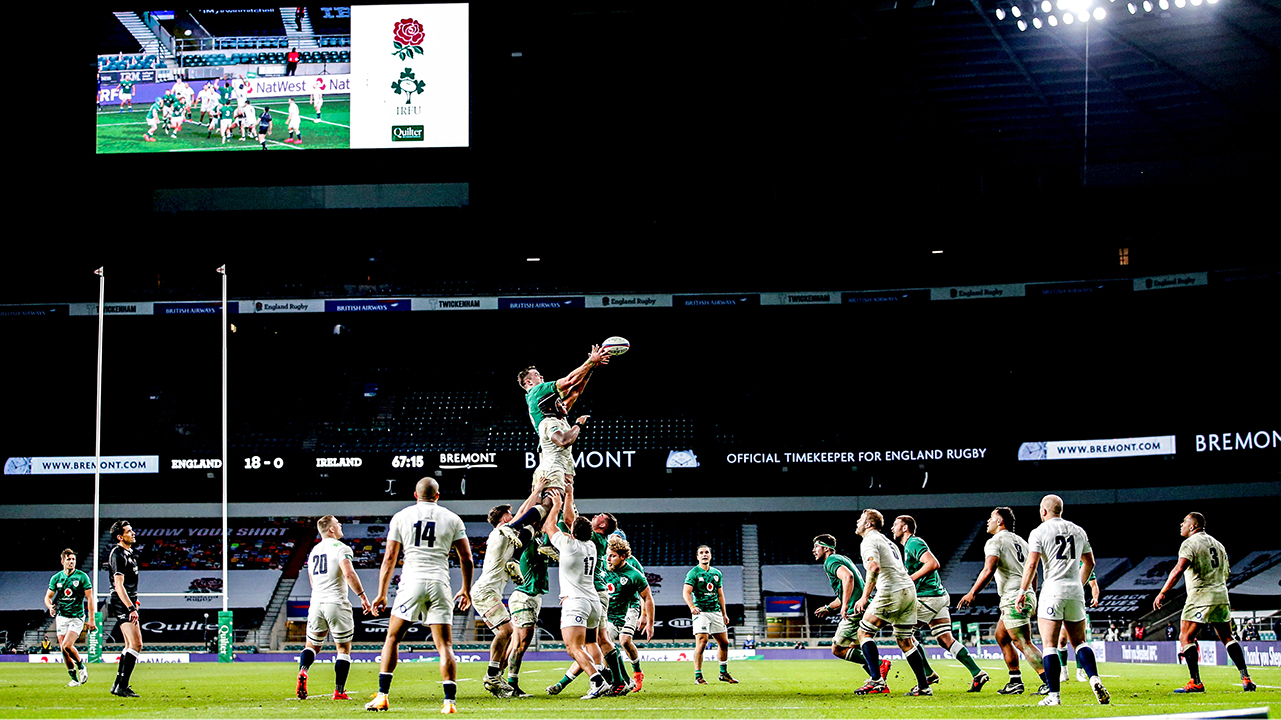 James Ryan of Ireland wins possession in the line-out ahead of Maro Itoje of England during the Autumn Nations Cup match between England and Ireland at Twickenham Stadium in London, England. Photo by Matt Impey/Sportsfile

Lineouts are a worry for Ireland

Ireland’s set pieces were under severe pressure throughout the match, with the lineout being placed under particular scrutiny.

Farrell’s men lost three lineouts directly from their own throw, one of which led to a length-of-the-field try for Johnny May, and was unable to get clean ball off the few that they did win.

Jackman questioned the decision making on attack, particularly when they consistently wen to a failing set piece.

“The players will play what game plan is put in front of them,” Jackman said.

“The reality was, the more phases we built, the more tired we looked and the more energetic they looked.”

Jackman believes that Ireland should have taken shots at goal more often, instead of attempting to push over the line from a lineout maul.

“Some of the thought processes behind it is baffling to me,” Jackman said.

“The laws have changed around the maul; it is so much easier to defend a maul now than it was two years ago.

“England scored first, the score is 5-0, [Owen] Farrell misses the conversion, we are away from home, we have a young team and a good goal kicker.

“Instead of going 5-3, we go into the corner; we lose the lineout and obviously Johnny May ends up scoring.

“From the lineout maul, they take the ball off us and they score.

“It is like we are not studying the stats of our own strengths and weaknesses, of how the game is going, and we are trying to do some of things we did in 2018, but without the accuracy or the efficiency.”