Former Ireland captain Fiona Steed joined Off The Ball on Friday to discuss Andy Farrell’s options for Ireland in the back three and back row.

Andy Farrell announced his 35-player squad for the conclusion of the 2020 Six Nations on Thursday, with six uncapped players making it in.

With no Keith Earls in the squad, and with Jordan Larmour’s ability under the high ball receiving criticism since Ireland’s return to rugby, the back three debate has been heating up.

Similarly, Jacob Stockdale’s form of late has drawn massive criticism, as he has struggled to find the form he had in 2018.

Steed believes that the familiarity with the Ireland squad may help Stockdale find that renaissance again.

“Players perform differently with different squads around them,” Steed said.

“Quite often players go back to their club for that renaissance and for that [feeling] of, ‘I’ve got my teammates around me again,’ and they grow and they revitalise.

“It could be the opposite for Stockdale that he could come into Ireland and show that form that he has nearly always shown for Ireland.”

Steed thinks that the added pressure of players waiting to take his spot will spur Stockdale on to find his form.

“He will be aware as well that James Lowe is literally waiting in the wings,” Steed said.

“He is a potential after this [group] of games as well.

“Each player will focus on their own piece and what they have to do to get themselves into the right frame of mind.”

Does their position matter?

Although form has been an issue for Stockdale, Steed thinks that he is still likely to start against Italy and France.

She is more concerned about exactly what positions each of Stockdale, Larmour and Andrew Conway will start in.

“Where do you play Stockdale? Obviously Ulster have been experimenting with him at fullback or do you play [Jordan] Larmour at fullback, who is probably my choice,” Steed said.

“I think Larmour needs that space and that he is a natural fit for there, but again Leinster are changing between himself and [Hugo] Keenan between wing and fullback.

“It is great to have that flexibility in a back three situation.

“Obviously Andrew Conway has been nominated for players’ player of the year and he has been good.

“He scores a phenomenal amount of tries regardless of which shirt he is wearing.” 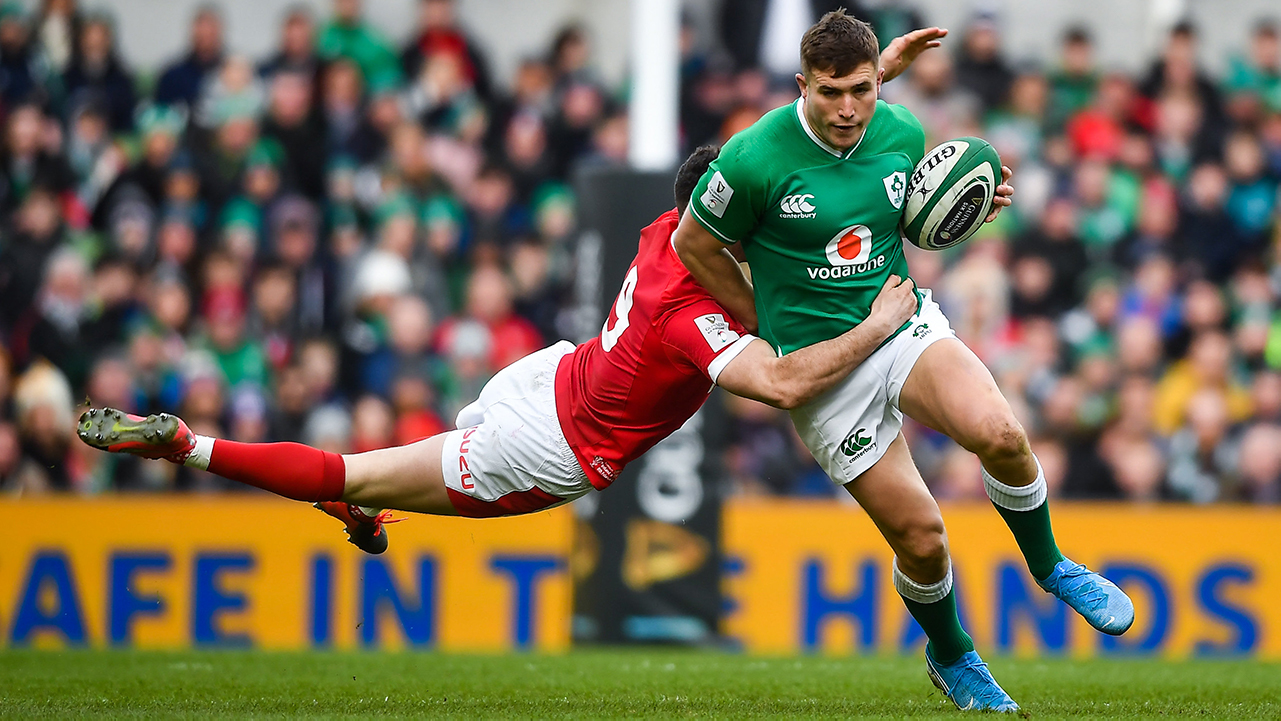 Jordan Larmour of Ireland is tackled by Tomos Williams of Wales during the Guinness Six Nations Rugby Championship match between Ireland and Wales at Aviva Stadium in Dublin. Photo by David Fitzgerald/Sportsfile

Steed believes that, based on the squad selected, it will be a combination of Larmour, Stockdale and Conway in the back three, with exact positions depending on the game.

“There is opportunity to use the individual strengths of the players at different times,” Steed said.

“Conway, for his height, is probably one of the best counter-movement jumpers in the game; he is absolutely phenomenal.

“It could be that you move him around during the game depending on where the kick-chase is or the box kick.

“Likewise with Larmour and his feet and the way that he can attack the space and create the space for others because he draws the defenders to him.

“Stockdale maybe doesn’t have as many skills in his armoury but he is absolutely devastating as a finisher with ball in hand.”

Locking down at six?

In addition to the debate surrounding the back three, the question of Irish physicality has been raised has been brought up, particularly after Leinster’s loss to Saracens in the Champions Cup quarter-final.

One solution to this problem could be to follow the likes of South Africa and England in putting a lock on the side of the scrum at number six. 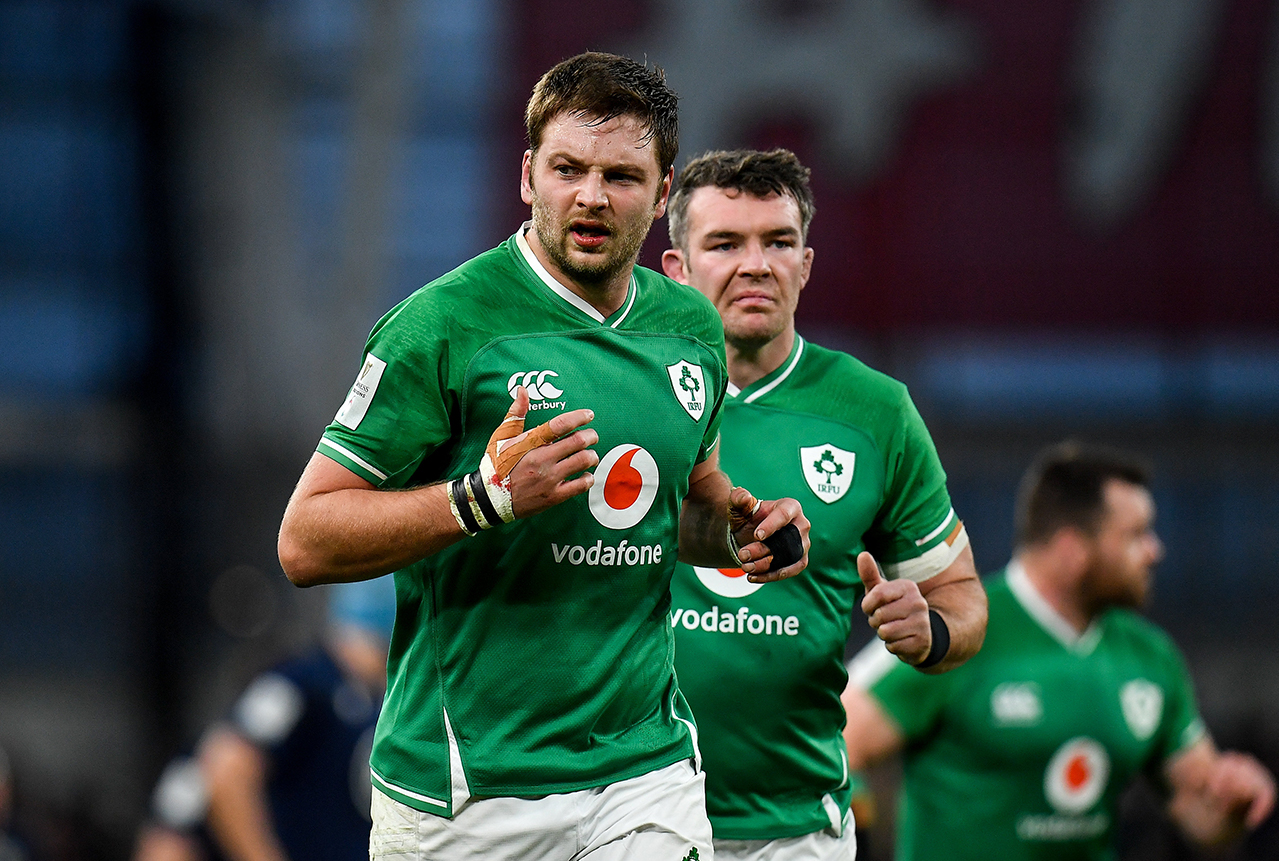 Iain Henderson of Ireland during the Guinness Six Nations Rugby Championship match between Ireland and Scotland at the Aviva Stadium in Dublin. Photo by Seb Daly/Sportsfile

Steed does not believe that this will solve the issue.

“I have thought about [the idea of putting a lock at six] in terms of Leinster being out done by Saracens and following the same model that England have used on us in the last few matches,” Steed said.

“You can’t choose what they do when they have the ball even though you may try to influence it.”

For Steed, the Irish players need to get their mentality right in order to get the better of the old foe.

“It is a mindset [issue] here as well, and we have to be ready for it,” Steed said.

“Our players are good enough; I don’t think we need to pick all of the beasts of men to do this piece and to go toe to toe.

“When we had our first choice [of players] sometimes we are still found wanting.

“That is what needs to be looked at more, that psychological thing.

“It is not as simple as picking an Iain Henderson at six or ‘packing the pack’.”