With less than a month until the Six Nations kicks off, former Ireland captain Keith Wood ran through his Ireland front-row depth chart on Wednesday’s OTB AM.

Andy Farrell’s side begin their campaign with the visit of Wales on February 6th.

Wood mentioned last month that it would be a straight shootout between Leinster duo Ronan Kelleher and Dan Sheehan for first-choice hooker.

But Wood has now also given his thoughts on which players would pack down with either Kelleher or Sheehan in the front three.

Wood joined Ger and Eoin on OTB AM and assessed Farrell’s options at 1 and 3 respectively.

Wood settled on Andrew Porter as his pick for loosehead, edging out the stalwart Cian Healy.

Traditionally plying his trade on the other side of the scrum, Porter’s move from tighthead to loosehead has been one of the great success stories in Irish rugby over the last year.

Wood has been seriously impressed by Porter’s capacity to adapt to the position.

“Porter had been a loosehead originally, and moved over to tighthead,” Wood said. "Tighthead is notoriously difficult and almost damaging on players.”

“I do think there would be a liberation for him going across, but his reaction to going across has been beyond professional.”

“I think he has given the Leinster team and the Ireland team a stronger scrum.”

“The fact Cian Healy is still playing is pretty amazing, from the injuries he has had”, Wood continued. “The quality of his performances in the autumn were just fantastic.”

“So, I think you get an opportunity to get the most that you can get out of Cian Healy because Andrew Porter has moved over there.”

“I think it has worked out incredibly well. There was a high level of risk involved in it, but we can’t sit here and say that we don’t want to see some risk.”

Wood: "All the ball carriers need to have that subtlety"

Wood further explained why he believes Cian Healy remains ahead of Munster’s Dave Kilcoyne in the pecking order.

“You need ball handlers, so you don’t just need to be Dave Kilcoyne, running at huge, accelerated pace into contact or into space, doesn’t matter which. You can’t do that all the time.”

“There is a requirement for all the players who are ball carriers to have that subtlety.” 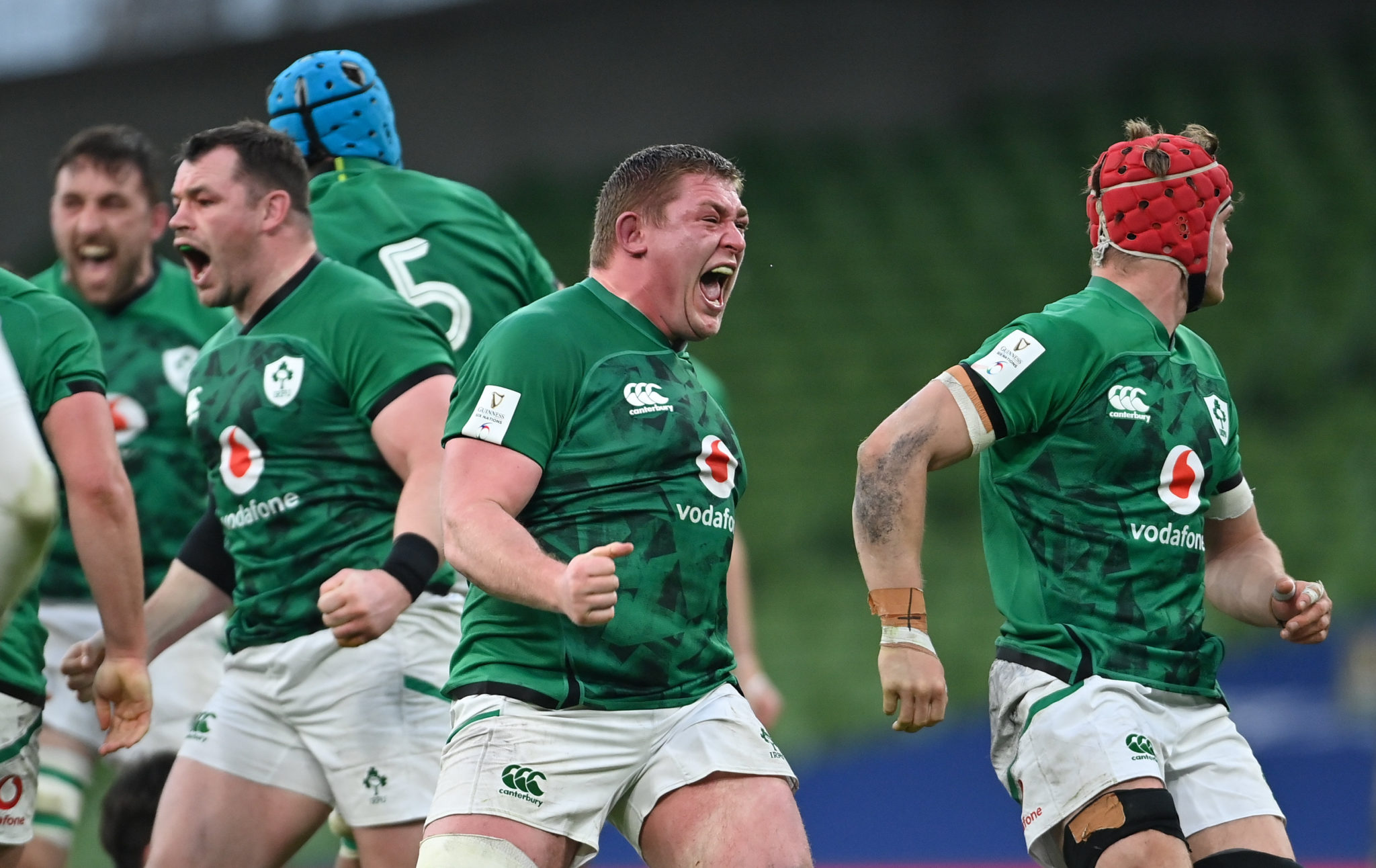 20 March 2021; Tadhg Furlong of Ireland celebrates a scrum penalty during the Guinness Six Nations Rugby Championship match between Ireland and England at the Aviva Stadium in Dublin. Photo by Ramsey Cardy/Sportsfile

Wood had no trouble in selecting the New Ross man as the first-choice #3.

However, Wood feels things get complicated further down the field, with a significant dropoff in the quality of back-up tightheads.

“I think Bealham has played pretty well this season. But I think there is a very large gap between him and Furlong, or him and Porter.”

“One thing I will say about Furlong is that Furlong does not need anyone behind him to push him. He is a setter of his own standards and there is just no issue with him at all.”

“We do need to try and upskill the other tightheads because there is a big gap there now,” Wood insisted.

“I don’t know what Farrell will think, whether he’ll say, ‘we can definitely have Bealham or Tom O’Toole on the bench and we’re ok with that’.”

“But actually, if it really became a big issue, would it go back to Porter? I don’t know.”

“For me, the second-best tighthead is Andrew Porter - but he can’t play two sides of the scrum at once!”