Former Leinster great Brian O’Driscoll discussed Leinster’s “embarrassment of riches” at 10, focusing on the Byrne brothers, on Wednesday Night Rugby on Off The Ball.

With Leinster preparing for their PRO 14 final clash with Ulster on Saturday, and their European quarter-final against Saracens next week, it has been rumoured that Leo Cullen will rest Johnny Sexton this weekend.

While some have said that this is a slight display of arrogance from the defending champions, O’Driscoll thinks that Leinster’s back-up 10s are all good enough to start.

“There is a huge amount of trust and focus being put into the other players, into the Byrne brothers, into Ciaran Frawley,” he said.

“I don’t think Leo [Cullen] and Stuart Lancaster are just paying lip-service to trying to keep everyone on side. 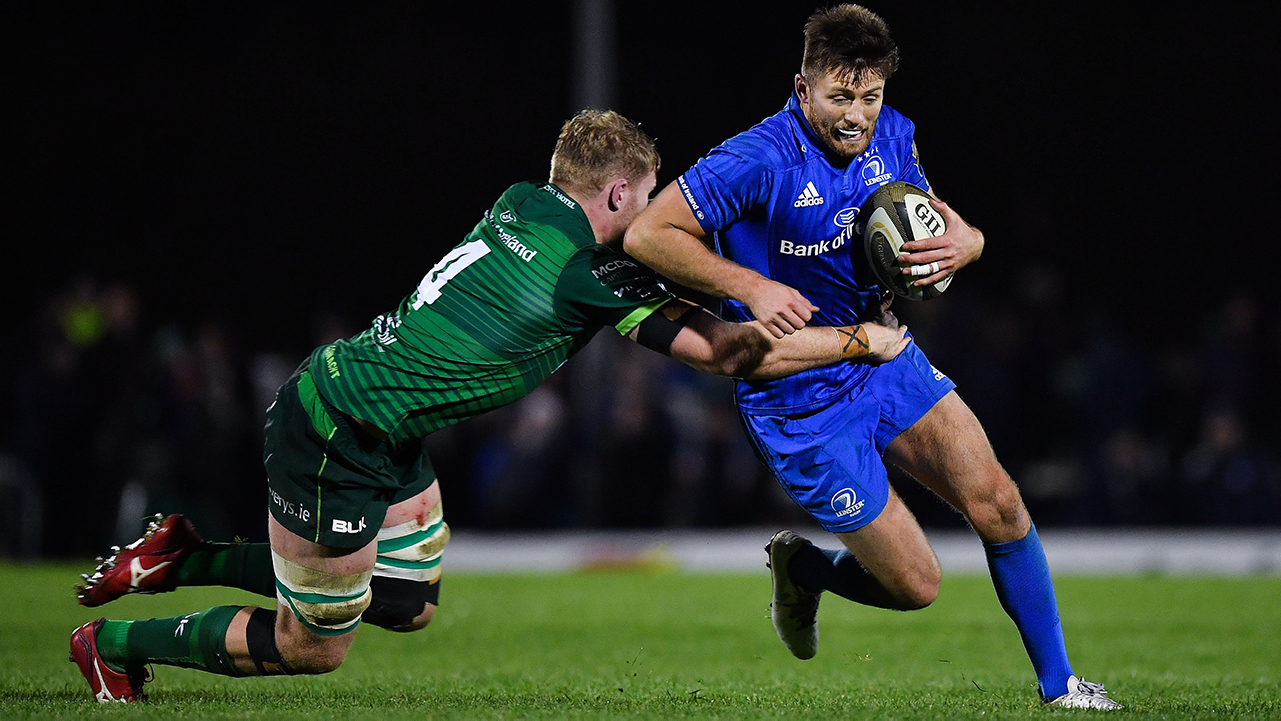 Ross Byrne of Leinster is tackled by Cillian Gallagher of Connacht during the Guinness PRO14 Round 6 match between Connacht and Leinster in the Sportsground in Galway. Photo by Brendan Moran/Sportsfile

Cullen has the option of picking either of Ross or Harry Byrne at 10, should he decide to rest Sexton against Ulster.

As the older brother, Ross has been the go-to stand in for Sexton, but O’Driscoll thinks he has more than proven himself in pressure games.

“In fairness to Ross Byrne, anytime he’s come in for big games he’s been calm, collected and he’s been able to deliver, as he did in the semi-final against Munster last year,” he said.

Despite this, the Irish legend believes that the younger Byrne is the better player.

“I think Harry [is the better out half], I think he offers more, I think he’s a bit more aggressive taking the ball to the line,” O’Driscoll said.

“I think he’s got bundles of confidence, I’m not saying his brother doesn’t, but he’s absolutely oozing with confidence.

“[He is] bordering on that cocky player that you want your 10 to be, and he’s someone that I think you would really love to play outside.

“He sticks defenders down on the inside and still knows how to throw the right pass.”

While Harry has that attacking mindset, O’Driscoll believes that Ross is better at making those around him live up to their potential.

“I think Ross is a bit more of a cog in the wheel rather than an x-factor player himself,” he said.

“I think he facilitates others to get more out of themselves.

“Whereas I think Harry Byrne wants to be that star player himself and that creates more space for other players naturally by him being so aggressive but also having the brain capacity to pick the right pass.

“I’m excited to see a bit more of him, we only saw him a few times last year.” 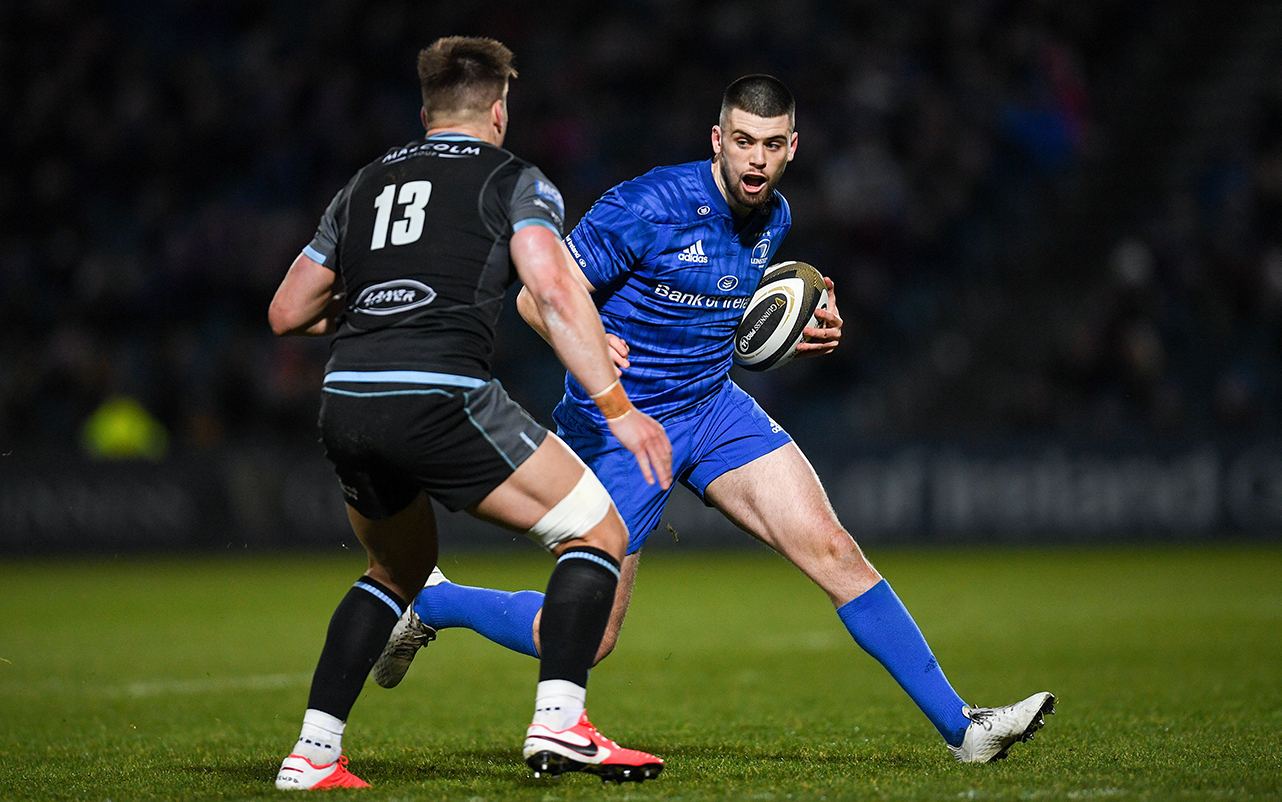 Harry Byrne of Leinster during the Guinness PRO14 Round 13 match between Leinster and Glasgow Warriors at the RDS Arena in Dublin. Photo by Ramsey Cardy/Sportsfile

The younger Byrne has only made 10 appearances for the province, scoring 58 points for his side.

Ross, on the other hand, is closing in on a century for the men in blue with 87 caps and boasts 508 points to his name.

Although he is four years younger than Ross, O’Driscoll wonders why the 21-year-old Byrne has not surpassed his brother as the preferred back-up for Sexton.

“It is interesting that he is not finding himself on the bench more regularly ahead of his brother now,” O’Driscoll said.

“I thought at this stage he might have surpassed him.

“There’s obviously something going on at training to keep his feet on the ground, and the guys feel that Ross Byrne still deserves his position in the 23.”

Best of both worlds

With the competition for the number 10 so fierce in Leinster, one of their high-quality out halves has already found his stride elsewhere in the backline.

The option to move one of the Byrnes into the back three could pay off equally as well as moving Ciaran Frawley to 12.

“Ross is going to be a 10, I don’t see him being a back three player,” O’Driscoll said.

“I think Harry could play in the back three, I think he could play 15.

“His kicking game is pretty reasonable from what I’ve seen, but because he has that attacking mentality, you know that he would fit well.

“He sees the space and he understands the opposition defensive lines and when there’s an opportunity to take on a front row or a tight five player versus when an outside back is there to be stuck and create space for someone else on the outside.”

This option could see similar results to that of the Barrett brothers in New Zealand.

Jordy Barrett migrated to the back three, and sometimes inside centre, in order to not compete for the starting spot with equally talented Beauden in the flyhalf shirt.

“It is a bit of an embarrassment of riches when you look at the calibre of the three or even four of them,” O’Driscoll said.

The potential to move one of the Byrnes to fullback, and with Rob Kearney on his way out, there could even be a scenario in which all four of Leinster’s talented out halves are in the same match day 23.

“It is going to be difficult to keep everyone interested, to feel as though everyone gets enough game time for them to want to continue to play for Leinster,” O’Driscoll said.

“It is inevitable that at some stage one of them is going to want to go and get more first team football.

“It’s just a matter of whether it will be before or after Johnny Sexton exiting the scene.”