Tadhg Furlong being allowed to play abroad could help create depth in the tighthead position, if ...

Tadhg Furlong being allowed to play abroad could help create depth in the tighthead position, if the debate on Wednesday’s OTB AM is anything to go by.

On Tuesday, Furlong extended his IRFU and Leinster contract for another year, signalling that he might be holding out for potential new offers in a few months’ time.

While the prospect of losing one of the world’s best tightheads to an overseas team is not ideal, OTB’s Ger Gilroy and Eoin Sheahan felt that it could help create depth in the front row, as players will need to fill in for Furlong in the big games.

As part of Wednesday’s Tight Five, OTB’s Neil Treacy argued against the idea, suggesting that the other provinces could easily provide the depth at tighthead called for.

Treacy believes that, if nothing else, Furlong’s one-year contract extension will allow him to bargain for a better deal at the next round of negotiations.

“It is very interesting the fact that he only took a one-year contract,” Treacy said. “We have quotes of him saying that there was a multi-year deal on the table.

“He doesn’t go into detail about whether that multi-year contract was for the same value or for less than he’d be getting across one year.

“The negotiations are realistically going to be starting in about four- or five-months’ time maybe; it is not as if he has to play another year of rugby to be in this excellent bargaining position.

“I think Tadhg Furlong is a must-keep!” 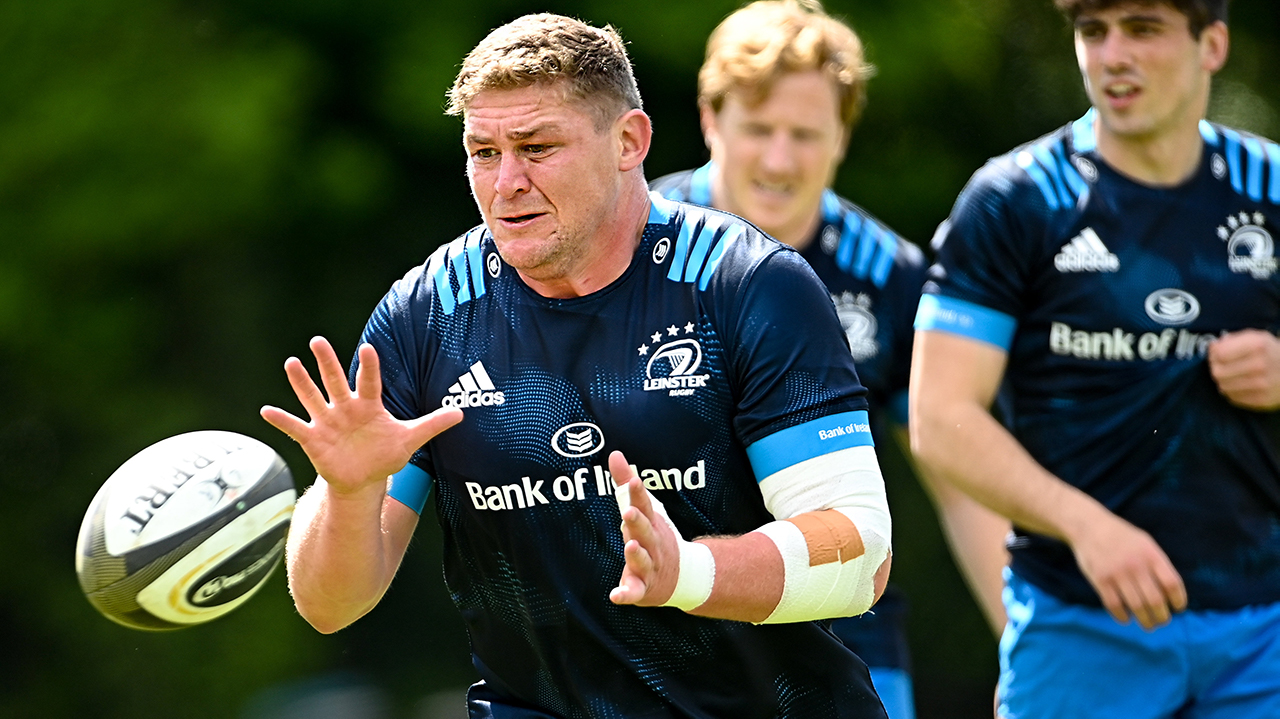 Currently, Irish-qualified players plying their trade abroad are not eligible for Irish selection, due in some part to the lack of control over game time and overall condition of the players being out of their hands.

Treacy believes that the options for Ireland behind Furlong are too good for the IRFU to be able to justify selecting him if he were to play abroad.

“That is the dangerous game, for instance, that Tadhg Furlong would have to play,” Treacy said. “If the offer from the IRFU isn’t as good in a few months’ time and they are not able to give him the big money.

“If he does take an opportunity in France or if he is considering an opportunity abroad, realistically he does have to take on the risk that the IRFU will be dangling that international selection in front of him. He will have to call that bluff.”

While he acknowledged that the IRFU have made exception in the past, particularly for Johnny Sexton when he played for Racing 92, Treacy believes that it is unlikely that Furlong would benefit from the same exception.

“The important thing is that David Nucifora wasn’t calling the shots back then,” Treacy said. “He is now, and he seems to be a very stubborn man and a hard man to budge off his convictions and opinions.

“Since David Nucifora came in, and the difficulties they had around Johnny Sexton while he was away when he was being absolutely flogged by Racing [they have learnt their lesson].

“He wasn’t able to come back to Ireland camps in particularly good shape. They don’t want to have to make that exception again.

“I often hear people talk about Simon Zebo as well, saying ‘oh they made the exception for Sexton’.

“They did make the exception back then, it wasn’t as hard a rule back then and also they really did not like having to do it, and I think they will be doing everything they can so that they won’t have to do ever again.

“I don’t think it is particularly similar to Johnny Sexton’s position in 2013, because as much Furlong is probably the best tighthead prop in the world, you also have the next option behind him in Andrew Porter,” Treacy added.

“While he is not as Tadhg Furlong level, he is soon to be a British & Irish Lion and he has proven over the course of the last two years that he is absolutely at test level.

“Furlong wouldn’t exactly be leaving Ireland with slim pickings at tighthead prop. He’d be leaving them with somebody who is very good, just not quite as good as him.”

While he agreed that Porter is of international quality, Gilroy argued that, unlike with Sexton, a prop needs to have a back-up meaning that it is actually the drop-off after Porter that needs to be considered when thinking about giving Furlong an exception. 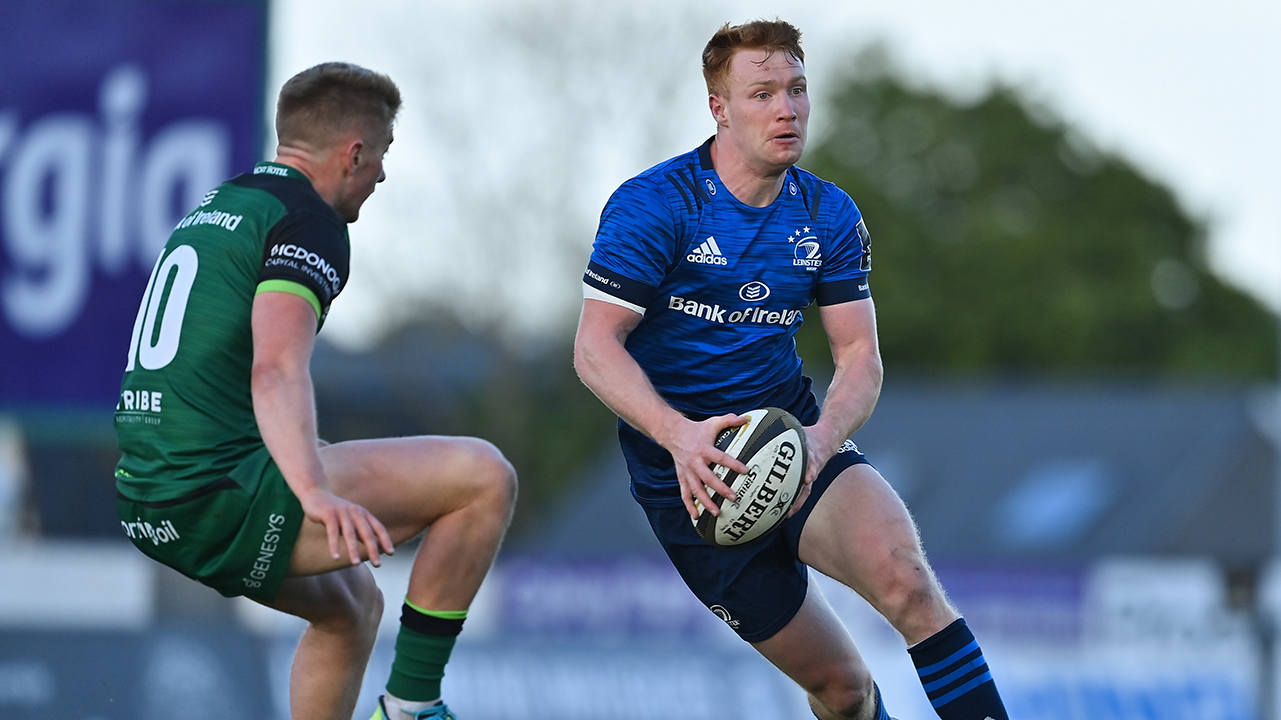 Ciarán Frawley of Leinster in action against Conor Fitzgerald of Connacht during the Guinness PRO14 Rainbow Cup match between Connacht and Leinster at The Sportsground in Galway. Photo by Brendan Moran/Sportsfile

“There is a part of me that thinks we have now got such a backlog of talent coming through that at some point we are going to need to send the 22-24-year-olds or the 26-28-year-olds off and see if they emerge as players who could contribute at international level,” Gilroy said.

“At the moment the backlog at Leinster is being shuffled through the other provinces, but eventually they are going to get stocked up too, and the Scott Pennys of the world who need game time… they are not going to get [it].

“Are Ciaran Frawley and Harry Byrne going to get enough game time at Leinster over the next few years that we are going to be able to establish that they are international quality?

“At the moment, maybe, maybe not. If we are saying, ‘if you ever leave, you can never play for Ireland’, then there is an unintended consequence.”

For Treacy, though, this is already happening, meaning that there is not a need for the IRFU to make this an actual policy.

“We are seeing it more and more where younger players are taking the risk or opportunity to go off to France or England if they think they are the fifth or sixth or seventh in line in their position at the academy,” Treacy said.

“In a lot of cases, they are proving themselves to be excellent players and are coming back to Ireland as better players as well.

“I think it is the risk we have to take when we are a country with only four professional teams.”