In the aftermath of England's Six Nations defeat of Wales on Saturday afternoon, the behaviour of Eddie Jones and his side was called into serious question on Monday's OTB AM.

A third successive win for England since that shock opening day defeat to France, it is Eddie Jones' side that currently sits atop the Six Nations table. The manner in which they're going about their business, however, has become a bone of serious contention.

"England are pushing it right to the edge and in the last two games, between Ireland and Wales, both referees were very, very poor regarding that physicality, that cheating and that illegality," remarked Alan Quinlan on Monday's OTB AM. "They are a wonderful side and a very powerful, dominant side, and they're getting to a place now where they're using their presence and that in-your-face attitude to spook referees."

Prior to sharing his thoughts on Monday's show, Ger Gilroy and Eoin Sheahan engaged in a discussion surrounding the negative aspects of England's play and the head coach who is publicly championing it.

"England are being refereed differently from everyone else," alleged Gilroy, "this is a proper thing.

"There is a license granted to the English rugby team that used to be granted to the All Blacks and I wonder if all of this is built into the atmosphere within which they operate." 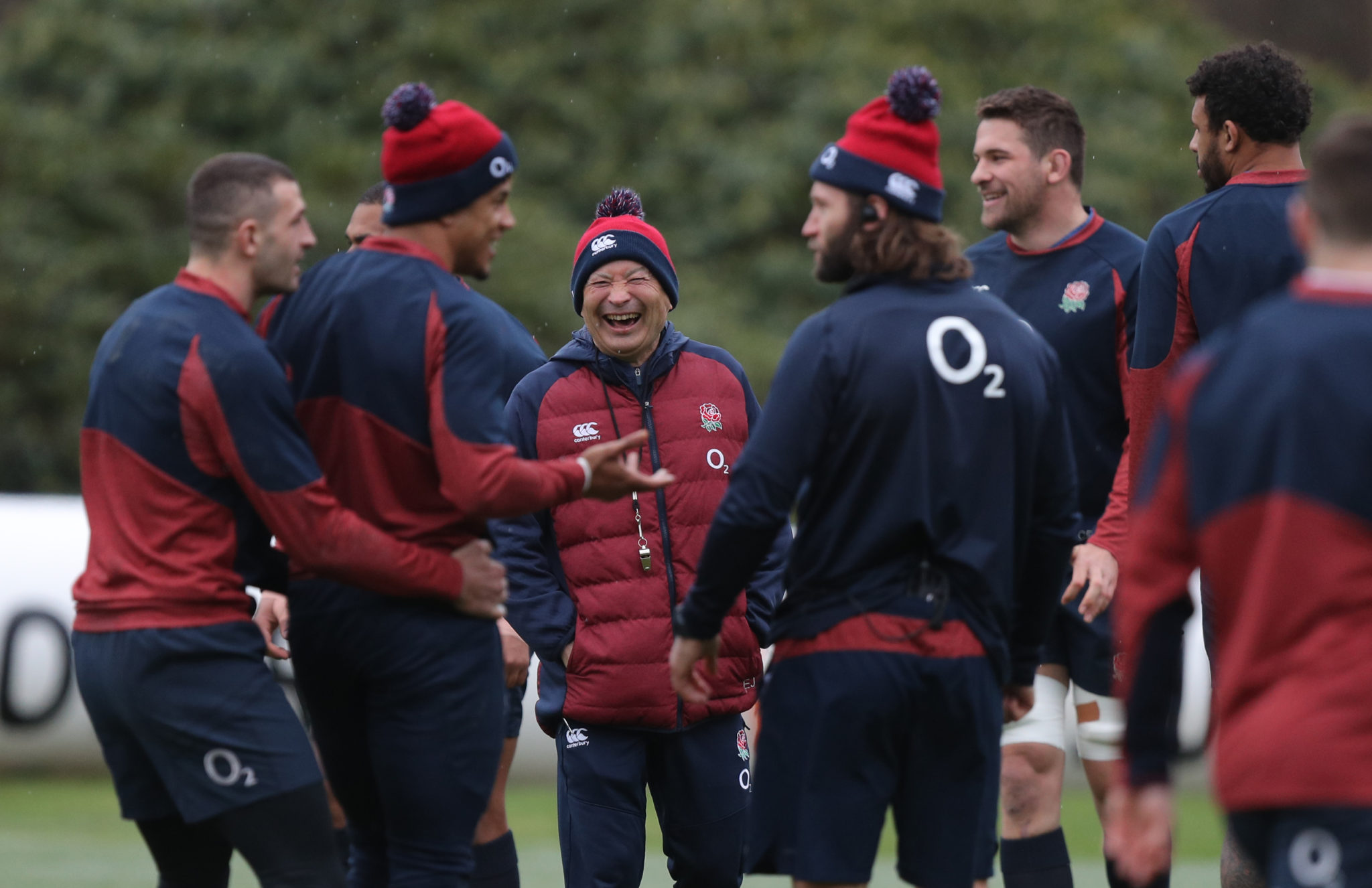 England head coach Eddie Jones (centre) shares a joke with his players during the training session at Pennyhill Park, Bagshot.

In conversation with Alan Quinlan, the former Munster and Ireland man explained how he believes Tuilagi's dangerous tackle could have had fatal consequences for Wales' George North. In the video that can be watched here, Gilroy and Eoin Sheahan explore the seemingly special treatment afforded to England's Owen Farrell on the pitch.

The incident of greatest interest and discussion was Joe Marler's decision to grope the genitals of Wales' Alun Wyn Jones, however.

"I think rugby is telling on itself a little bit by defending Marler in the way that some people are closing ranks behind him," remarked Gilroy of the toxicity rugby has once again showed itself to contain. "If you put this with lots of other little things we've seen from rugby in the last couple of years, this becomes to look like a weird, weird culture.

"Someone needs to come out and say that, 'No, we don't accept this.'

"This is 'boys will be boys' bollix and if boys are going to be groping then these boys need to be told, again, that this is wrong. You can't grope people, it is unacceptable.

"The whole power of a grope is that the groper gets away with it and any women watching that must have been thinking, 'Oh, I recognise that. I recognise somebody who is big and physically strong doing something knowing that they're going to get away with it.'

"My timeline was full of people using the crying laughing emoji, people I expect would know better."

Rooted within this behaviour is the England head coach, Eddie Jones.

Prior to the opening round game against France, Jones surprised some onlookers by claiming that his England side intended to unleash "absolute brutality" on Fabien Galthié’s young French side. In the aftermath of Manu Tuilagi's red card for his reckless challenge on George North, Jones was quick to defend the Leicester man by way of criticising the referee.

"Eddie Jones defends Tuilagi by questioning the referee and saying they were playing against 16 men," noted Gilroy. "I hope Jones gets the book thrown at him as well.

"He will come out and defend himself and say that it is his job to add a little bit of spice to things, but actually, these games matter already.

"He sends them out to be brutal, Manu Tuilagi is brutal and he accuses the referee of cheating, that it wasn't a red card. His words are not without consequence."

Crucially, with so many England fans online opting to defend their team, it was suggested that Jones' words unleashed something far more brutal in the minds of some fans: "Little England is waving its red and white flag going, 'Ya, ya!' - this is how Brexit happens."

'He was messing, even though it was wrong' | Quinlan on Marler incident