In the aftermath of Ireland's World Cup disappointment in Japan, the IRFU's Performance Director David Nucifora delivered a selection of the findings from a review into this latest failure.

A subject of great interest on Thursday's OTB AM, the apparent absolution of David Nucifora himself came under scrutiny.

In what appears to have been a detailed examination of the final stages in Ireland's World Cup cycle, the review itself involved Nucifora speaking with relevant management staff while an independent body dealt specifically with the players.

"My issue with this the whole way through is that David Nucifora has been doing the review into the performance," noted Ger Gilroy. "He is in charge of the high-performance department.

"The buck stops with Nucifora. He was the one who put on the record our expressed job here is to go out and do something we have never done before, and that is to get past the quarter-final.

"He wasn't interviewed. They didn't ask him, you know, what did you do? How did you do in your role?"

The buck is stopping here with Joe Schmidt. 'All our processes are perfect.' Are they?! None of the IRFU's decision-making was wrong, according to the IRFU 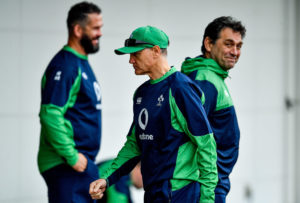 Appointed in 2014, almost one year after it was announced that Joe Schmidt would be replacing Declan Kidney as head coach of the Irish rugby team, David Nucifora's tenure was extended to 2022 four months before Ireland's World Cup bid got underway in September.

A former Australian international who previously oversaw the high-performance unit of the ARU, the IRFU chief executive Philip Browne was effusive in his praise of Nucifora when the latter's contract extension was confirmed in May.

"David has delivered across a huge number of areas," noted Browne, "and Irish Rugby is in a better place for the experience, leadership and passion he has brought to the role."

Nevertheless, as Ireland prepare for life after Joe Schmidt, questions regarding Nucifora's own performance remain pertinent.

"How can you be objective about yourself," queried Gilroy. "Everybody makes excuses for themselves, in all facets of life.

"The buck is stopping here with Joe Schmidt and the players, but all our processes are perfect. Are they?! None of the IRFU's decision-making was wrong, according to the IRFU."

"You can see where his words are coming from," he outlined. "If I'm in his position I am probably going to be similarly saying, 'Everything I did I thought I was doing pretty well.'

"But that isn't the vantage point from which you can judge yourself. Somebody else has to do that."

Ultimately, the sense that the post-World Cup review had been botched was palpable.

"It reeks a little bit of bullshit," argued Gilroy. "I can't say it is a whitewash because we haven't seen [the report in full], and maybe the document is unbelievably hard-hitting, but why aren't they making it public?

"Bear in mind that [Nucifora] was Joe Schmidt's boss, and they had worked together in the past [with the Auckland Blues] ... but where is he being held to account in any of this?"

You can watch back the entirety of the response to this development here. Read about Rory Best's insights into what went wrong in Japan here.