Connacht had everything against them in their final group stage match of the Heineken Champions Cup, according to Irish Times journalist Gerry Thornley.

Connacht had everything against them in their final group stage match of the Heineken Champions Cup, according to Irish Times journalist Gerry Thornley.

Connacht lost their final group stage encounter against Stade Francais in Paris on Sunday in heartbreaking fashion, as they conceded a late unanswered try and penalty in the final five minutes to lose by just six points.

Heading into the final 12 minutes, Connacht held a 31-27 lead, before Conor Oliver was yellow carded for being offside at the ruck, which Thornley suggested was 'harsh'.

Even before kickoff, however, the odds were stacked against Connacht, as they were missing a number of players through injury.

While he praised the efforts of Connacht, Thornley held little back in his criticism of referee Wayne Barnes and his penalising of the men in green late in the game.

'They were missing six props!'

Speaking on Monday Night Rugby, Thornley discussed the circumstances that went against Connacht on Sunday.

"Six props," Thornley said. "They were missing six props! Any of whom, had they been fit, would have started. So, they were effectively down to fourth choices.

"Jordan Duggan, 24 years old, only his fifth start. Greg McGrath, 25 years old, in his first start. One went 80 minutes, the other had to go 76 minutes.

"Then in the second row, you had a 24-year-old and a 22-year-old. I think the tight five between them, if you take out Shane Delahunt, had only started 26 games in total.

"I love a bet. I like betting on Connacht particularly. But I was not remotely tempted to bet on on them six points down to 11.

"I thought it was a minor miracle that they came so close and were well in the hunt to win that game."

For Thornley, Stade's over-reliance on the set piece was going to be particularly difficult for Connacht to overcome with an understrength tight five.

"The scrum killed them," Thornley said. "If they had anything like a full strength tight five they would have won that game, no doubt.

"Really, Stade go to the scrum so much."

You know you're in trouble when you see a wall of green shrits running towards you 😳@connachtrugby work the ball across the line excellently once again, Conor Oliver and Jarrad Butler have a little one-two and make it look oh so easy 😌#HeinekenChampionsCup pic.twitter.com/eMHMTxNsUB

In spite of the struggles that Connacht had late in the match, they never stopped searching for the score that would secure their victory.

This is what set their performance on Sunday apart from their previous match against Leicester a week earlier, according to Thornley.

"All that being said and done, they scored some wonderful tries," Thornley said. "I think they kept playing. It was a bit different to the Leicester game.

"In that extraordinary end-to-end-to-end-to-end sequence going into the last five minutes, compare that to the week before at the Sportsground where there was kicking the ball and weren't chasing it that well.

"I don't think they stopped playing. They went for offloads." 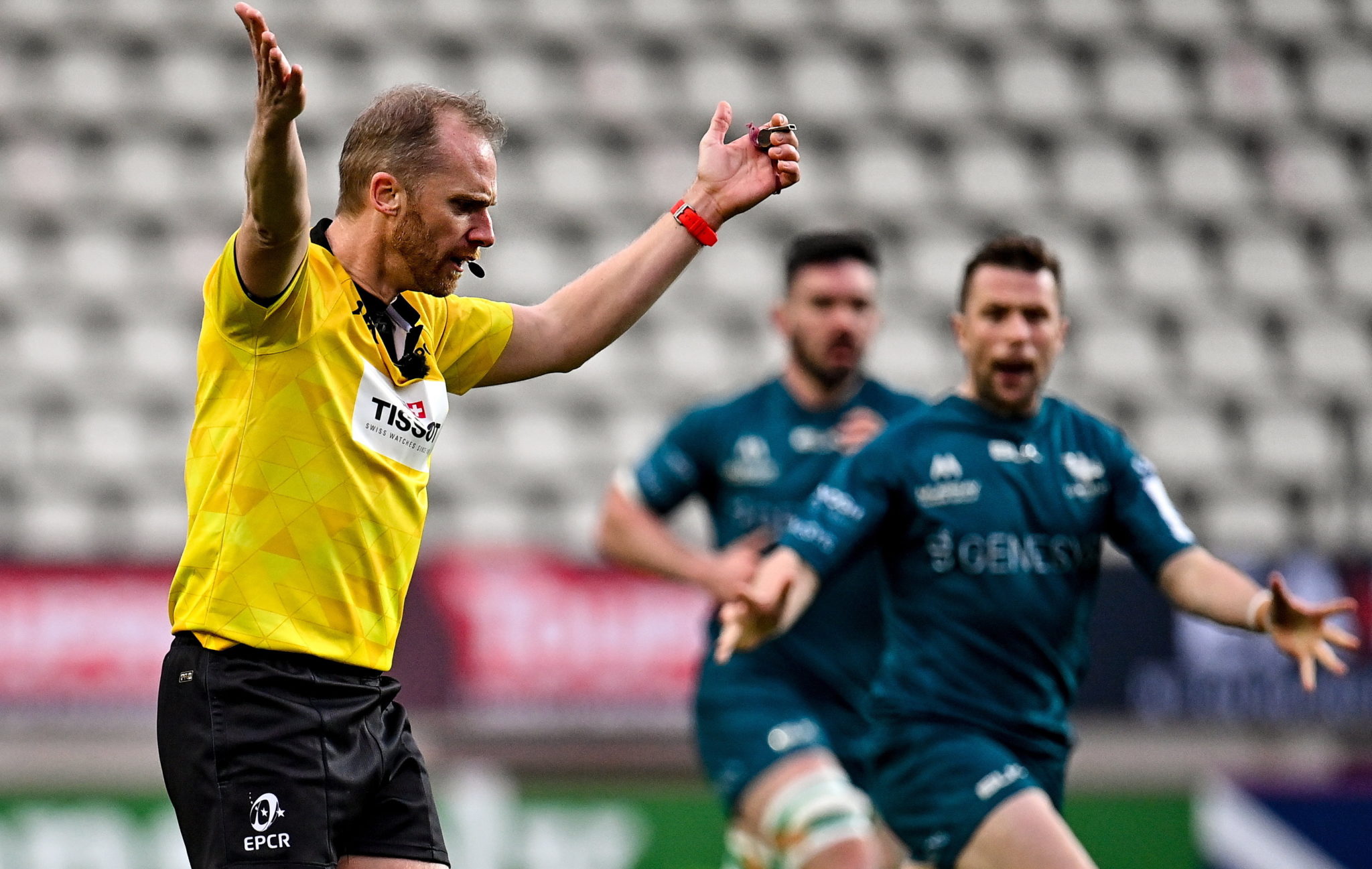 'Wayne Barnes was refereeing only one team'

Referee Barnes was in charge in the middle. While many praised his handling of the Tolu Latu red card shortly after half time, the remainder of his calls, particularly in the second half, shocked Thornley.

"I know Wayne Barnes and the officials had a picture from early in the game of Stade Francais dominance in the scrum," Thornley said.

"In that last 15 minutes, Wayne Barnes was refereeing only one team. The penalty count was 5-0. Both tries came off advantage plays. Conor Oliver was harshly sin-binned.

"There were at least two turnovers by Stade. One was side-entry, one where neither of the two tacklers had rolled away. Had the shoe been on the other foot, I'm sure Connacht would have gotten pinged.

"But, by some distance, the worst was the break by Hugo Sanchez. It clearly comes from a piece of blocking by the Stade tighthead.

"Yet, Connacht twice get done for blocking; once ruling out a try which was no-worse."

Adrien Lapegue carves in and through Connacht to give 14 men @SFParisRugby the lead with less than 10 minutes to go!

In the final minute of the match, Stade were awarded a scrum penalty. While flyhalf Joris Segonds missed the kick, the ball came off the posts, Connacht ran the ball out of their 22m and were eventually penalised again at the ruck.

This time, Nicolas Sanchez slotted the penalty to win the match by six points. However, Thornley felt that the initial penalty went the completely wrong way.

"The scrum penalty was scandalous," Thornley said. "I was right beside the touch-judge. As little as my knowledge is about scrummaging, their tighthead clearly goes to ground!

"He loses his bind, he loses his footing and he goes to deck, and it is a penalty for Stade Francais? I thought it was a shocking decision!

"Wayne Barnes was pretty bad. It would almost rival Mike Adamson on Friday night, but not quite."

In spite of the recent loss, Connacht qualified for the Champions Cup knockout stages prior to the start of the weekend. However, things do not get easier for Andy Friend's men, as they will take on Leinster in the two-legged Round of 16.