In the immediate aftermath of Ireland's Rugby World Cup quarter-final defeat to New Zealand last weekend, Brian O'Driscoll probed the Irish provinces in an attempt to explain what had occurred.

"I wonder with Stuart Lancaster coming in and his focus being very different to Joe Schmidt’s," he queried on Off the Ball, "did that upset the apple cart a little bit?

"Lancaster is very much about unstructured play rather than Joe’s focus around set-piece. Did that cast a few doubts into players' minds of what way they needed to train and what they needed to focus on?"

"There's comparisons being made when coaches come in," he noted. "You could easily say, at the World Cup, there were 14 Leinster players went out there originally. There are 12 Munster players.

"It’s a bit of a narrow focus, would be my overall observation."

It is important to have foreign coaches come in and not just home-grown. You have to see other ways of the game being played and get a taste of how other countries are doing it 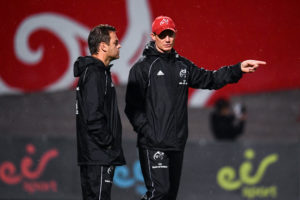 Somewhat surprised by Cullen's reaction to his comments, Brian O'Driscoll explained that his reference to Stuart Lancaster's influence had been misunderstood.

"It was a compliment," he explained on Tuesday's OTB AM. "There's no pointing fingers here, no reason they should be going on the defensive about it."

One of many Leinster players who worked under Joe Schmidt with the province and subsequently with Ireland, Brian O'Driscoll highlighted the manner in which the introduction of Lancaster and others altered the routine of Ireland's internationals.

"My understanding of when Joe went to the national team," he recalled, "[was that] all the other provincial players got a taste of Joe's coaching and they were like, 'Oh my god, what have we been missing?! This guy is the bee's knees.'

"When they then went back to their provincial teams, and this is a general statement and not the case for everyone, I don't think they felt what they were doing provincially was to the same level of coaching as Joe Schmidt.

"Then, Stuart Lancaster and Leo Cullen come in and they offer something that the players go back to and really enjoy as well. They have some success from it as well.

"For the first time in Joe Schmidt's tenure, he's dealing with players that are working in two environments that they are loving and thriving in."

A system that had been working in favour of the provincial and international set-ups up until 2019, the struggles of the latter could not be so easily explained away when one considered the proficiency of the former.

"It's human instinct that people possibly question an area where it's not quite going as well as it did," reasoned O'Driscoll. "I know how much [the players] love playing and training in the Leinster jersey, and it is the lion share of the Irish squad that we're talking about.

"Players saw there was an alternative to playing the game in the Joe Schmidt way."

Far from criticising the influence of the provinces, Brian O'Driscoll held firm on the idea that Ireland's four professional clubs should persist with experimentation for the benefit of the whole.

"It is important to have foreign coaches come in and not just home-grown," he asserted. "You have to see other ways of the game being played.

"We get a taste of how other countries are doing it, and you want the great brains of the game coming and influencing players."

You can watch Brian O'Driscoll's full recap of the weekend's action here.