After England's dismantling of the All Blacks in the weekend's first Rugby World Cup semi-final, Alan Quinlan held up the back row as evidence of where the game was won for Eddie Jones' side.

Although England's Maro Itoje was deemed man-of-the-match in Saturday's Rugby World Cup semi-final defeat of the All Blacks, Alan Quinlan's focus was directed toward Itoje's two back row compatriots on Tuesday's OTB AM.

Two of Eddie Jones' men to deliver stellar performances in Yokohama, Quinlan highlighted Tom Curry and Sam Underhill as an example of back row play at its very best.

"The reality of these guys is that they affect everything," he explained. "They're tormenting the opposition and performing at a different level.

"There's no way anyone is as good as Underhill and Curry in world rugby at the moment, it is as simple as that."

I stood beside Curry in Twickenham for that World Cup warm-up game and he's massive. It's hard to believe he's only 21. 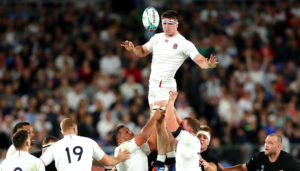 Of the back row union himself, Alan Quinlan nevertheless believes that the performances of Curry and Underhill, 21 and 23-years-old respectively, have been instrumental in bringing England to a World Cup final.

"I keep saying this about the back row and I know I played there myself, but I really and truly believe it," he explained. "The back row can win or lose games for you.

"They can destroy the opposition if they're unbelievably competitive, fit, strong and abrasive, and both of those guys are having so many big moments in games.

"I stood beside Curry in Twickenham for that World Cup warm-up game and he's massive.

"He's just so physically big and strong, he looks like a 30-year-old back row. It's hard to believe he's only 21."

From an Irish standpoint, however deep Joe Schmidt's options in the back row had appeared in the months before their World Cup disappointment, Quinlan doesn't see much parity between the best Ireland have to offer and the England contingent.

"They can carry, tackle, be devastating at the breakdown and they're just your modern-day back row players."

"I wonder if the coach is being challenged" | O'Driscoll on Munster