Ahead of suffering their fifth defeat in a win-less run through the Champions Cup pool stages, Wasps' Director of Rugby Dai Young lamented the contrasting states of his club and their opponents Leinster.

"As Directors of Rugby, we have a salary cap that we all adhere to and we all try to get as good a squad as possible, but I think its plain to see for everybody that it's an attritional league and you do pick up injuries," Young explained to Somerset Live.

"Look at Leinster last weekend, they had five British Lions out injured and they still had 15 internationals on the field. They've got that strength in depth."

Quick to acknowledge that Young and his English Premiership counterparts do have to countenance certain complexities alien to the provincial coaches in Ireland, Alan Quinlan nevertheless scorned an English mentality that seems incapable of crediting the good work being done in Ireland.

"They're looking to be condescending toward the Irish players saying that they're rested, and there's no relegation in the Pro 14, and all this.

"They never seem to mention how good the players are."

England have the biggest playing pool in the world, and all they do is say, 'well, it's because Ireland rest players.' 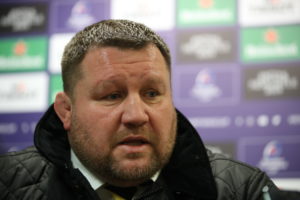 Although Young certainly stressed how impressed he had been with Leinster's players ahead of their Champions Cup clash, Quinlan identified the issue as one that went much further beyond the Wasps man alone.

In what has been a disastrous season of European action for the English club, only Saracens have made it as far as the quarter-final stage of the top competition.

Critical of the approach such clubs are undertaking in comparison to their Irish counterparts, Quinlan dismissed the notion that greater periods of rest were fundamental in the success of Ireland's provinces.

"[Wasps] have a bigger budget than Leinster," stated Quinlan.

"So why don't they have enough players? Where are the academy players?

"[England] have contested eight of the last 11 finals of the [Six Nations U20] championships, where are all these young players coming through?

"You look at Leinster and who they've brought through. The amount of Leinster players [now playing] in Munster, there's four or five in Ulster, there's a number in Connacht - there's a conveyor-belt there.

Disgruntled by an unwillingness of these English clubs to recognise the hard work and outstanding structure behind Irish success at this level, Quinlan is "sick of listening" to such complaints.