McGuinness joined Ger and Johnny on this week’s Friday Night Racing, and had nothing but the fullest praise for his prized horse.

Trainer Ado McGuinness has nothing but the fullest praise for his prized horse A Case Of You.

Having already enjoyed a Grade One win at ParisLongchamp last season, the colt stormed home last weekend to take the Al Quoz Sprint at Meydan.

Heading into the race at 14/1, McGuinness’s horse saw off the challenge of 10/11 favourite and sometime rival Man Of Promise.

McGuinness is well aware of the talent and potential of his four-year-old horse.

He joined Ger and Johnny on this week’s Friday Night Racing. The Lusk trainer explained that what makes A Case Of You stand out is his ability to close out races.

“In very good sprinters, the last furlong is the fastest furlong, and with this lad, it is - he’s like a bullet.”

McGuinness: "It’s nearly easier to train a horse like him!”

McGuinness also detailed how he prepares horses for that crucial final stretch.

“With sprinters, you don’t gallop the brains out of them,” he said. “You have to find out how fast this horse is.”

“He’s learning his trade, and he learned as he went on. We get him fit, and he’s doing his few bits of work.”

“Even when he is doing his preps - Ian Brennan was out in Dubai with him last week, and did a great job - his preps for Dubai were all on his own.”

“I don’t have to put a horse with him to find out how good he is. The odd day, I might send out a companion with him to lead him for a while.

“It’s easy - I get him fit, and then I know exactly what I want to do with him.”

“I don’t take him off the bridle or anything - I just get a fitness blow into him and that’s all.” 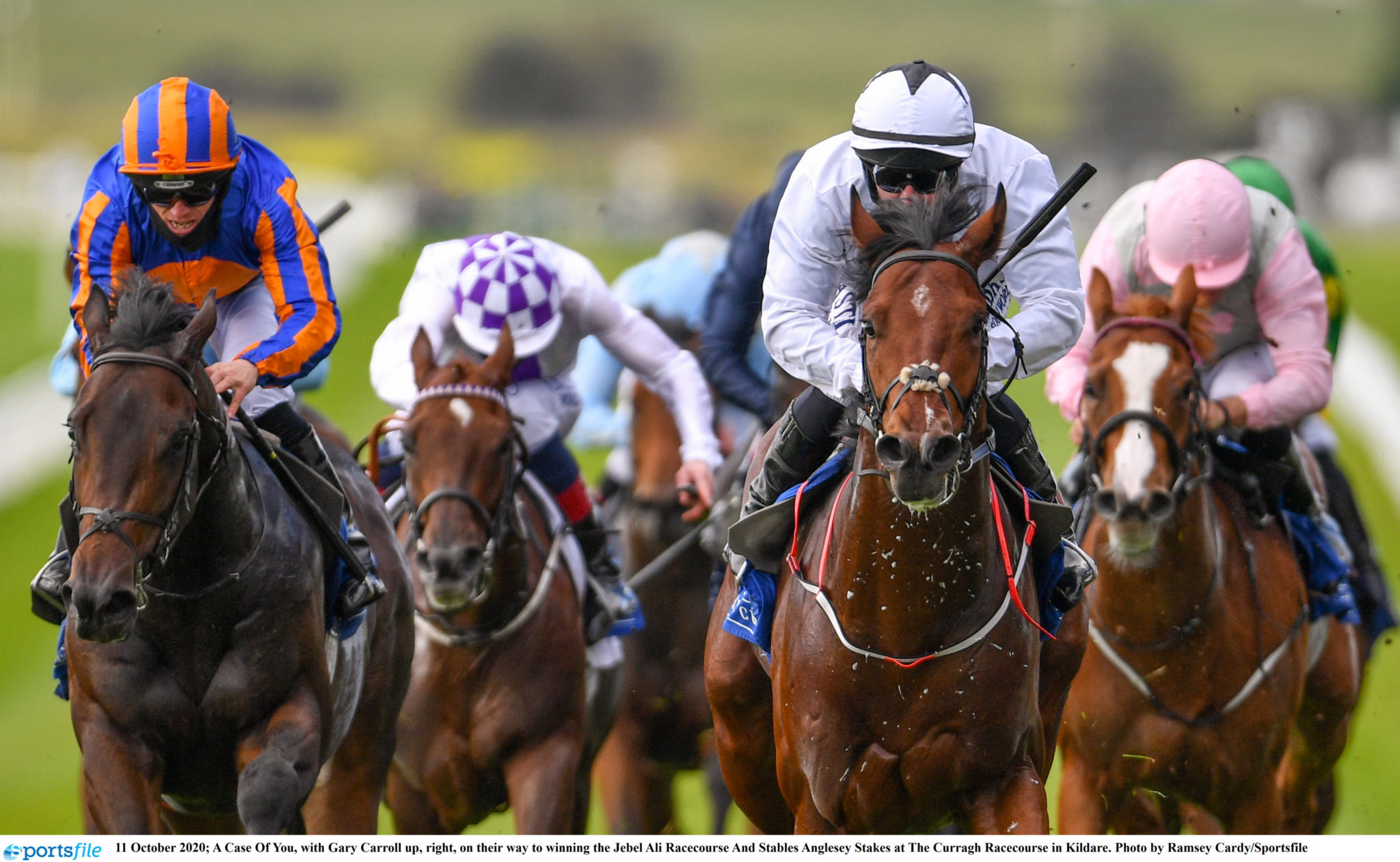 11 October 2020; A Case Of You, with Gary Carroll up, right, on their way to winning the Jebel Ali Racecourse And Stables Anglesey Stakes at The Curragh Racecourse in Kildare. Photo by Ramsey Cardy/Sportsfile

McGuinness also has every faith that his horse will be able to maintain his form ahead of Royal Ascot in June.

“I knew he would improve again after Super Saturday.”

“He had a little bit of a setback going out on the plane  but he was fine. He hurt his tongue and went round Dubai for two days with his tongue hanging out before he ran.”

“But we got him out there, the vets looked at him and he was fine, so we’ve never had an issue with him.”

“He just has so much natural ability that, to be honest, it’s nearly easier to train a horse like him!”