'If you don't want to be champion, why are you doing it?' | Gordon Elliott stable tour

Gordon Elliott spoke to OTB about some of his stable stars ahead of the upcoming National Hunt season.

A brilliant Cheltenham has almost faded from the pandemic dominated memory, with Punchestown and Aintree both lost to lockdown. Elliott however, still has a galaxy of stars to light up the dark winter evenings.

Elliott's team is strong, as is the trainer's ambition.

"If you are training horses, it's like being a jockey, if you don't want to be champion jockey why are you doing it?

"If your ambition is to train 20 or 30 winners a year or be Champion Trainer, I know who I'd want my horse with.

"I have a serious team of horses [...] hopefully we can keep them in one piece and have a good season. 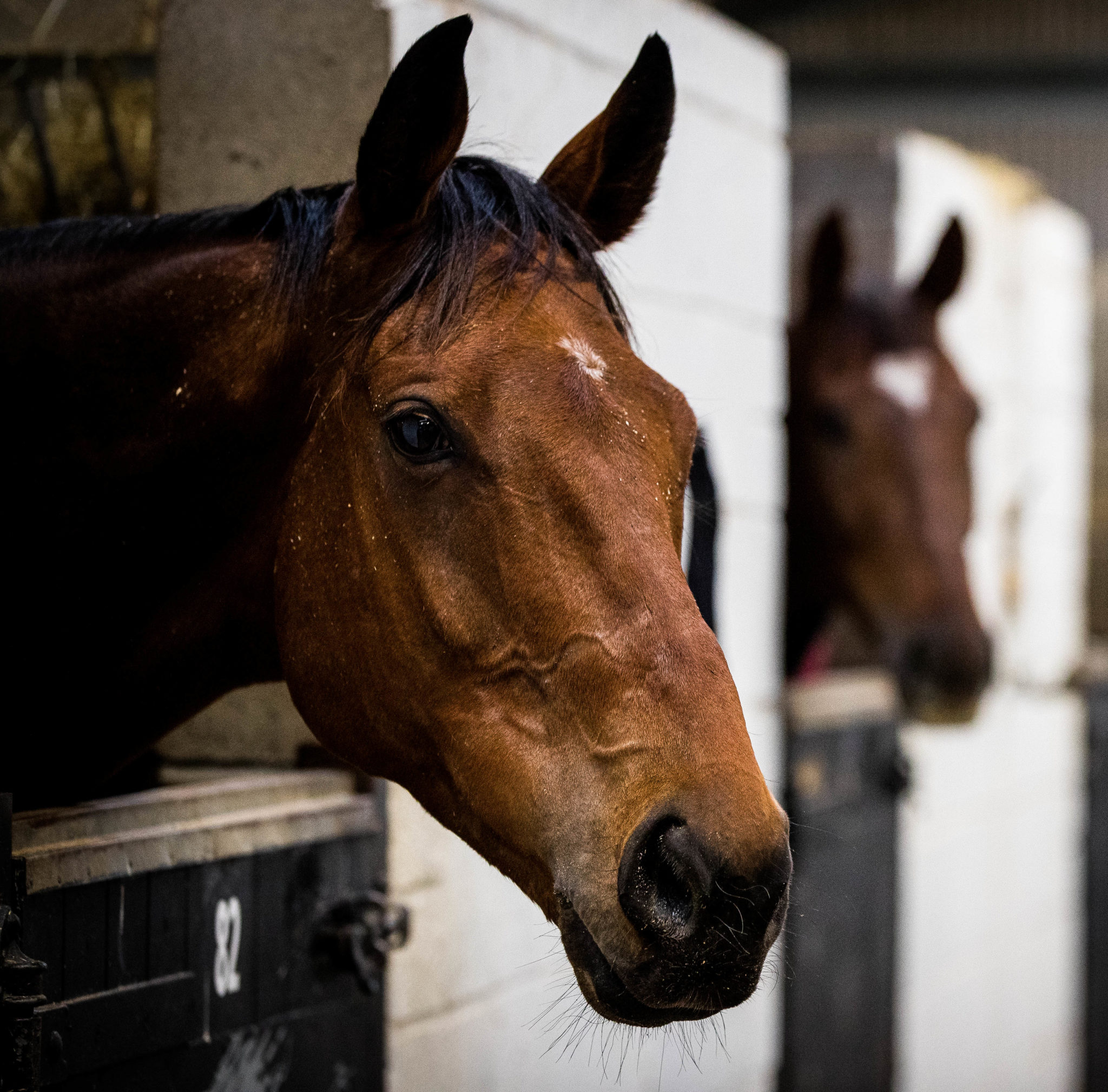 Last year's superstar novice hurdler will have a novice chasing campaign this year, the decision to go chasing was slightly influenced by stablemate Samcro's troubled year as a senior hurdler.

"It did swerve me a little bit, at the time I thought Samcro was a champion hurdle horse and I wasted the year with him," Gordon Elliott said of the decision to go chasing.

"Envoi Allen was bought to be a Gold Cup horse and that's the way we are going to train him."

"He doesn't do anything flashy at home, he's the real deal when he gets onto the track and that's the thing.

"We're lucky to have him. He's real laid back and just does what you ask him.

"Even when you saw him in Cheltenham there this year and for two or three strides at the back of the second-last I thought 'Oh, we're in trouble here' but he just picks up. There's more there when you want him.

The horse will start off in the same beginners' chase as Samcro started out last year, the trainer says Envoi Allen hasn't done too much ahead of his seasonal debut.

"The ground has been good enough so we haven't done an awful lot with him. He came out of the Colin Bowe school so he would have done a lot of schooling when he was younger.

"So it'll just be a matter of getting his eye back in and refreshing him, he knows his job [...] but if we want him to win a Gold Cup he'd want to be winning at Down Royal" 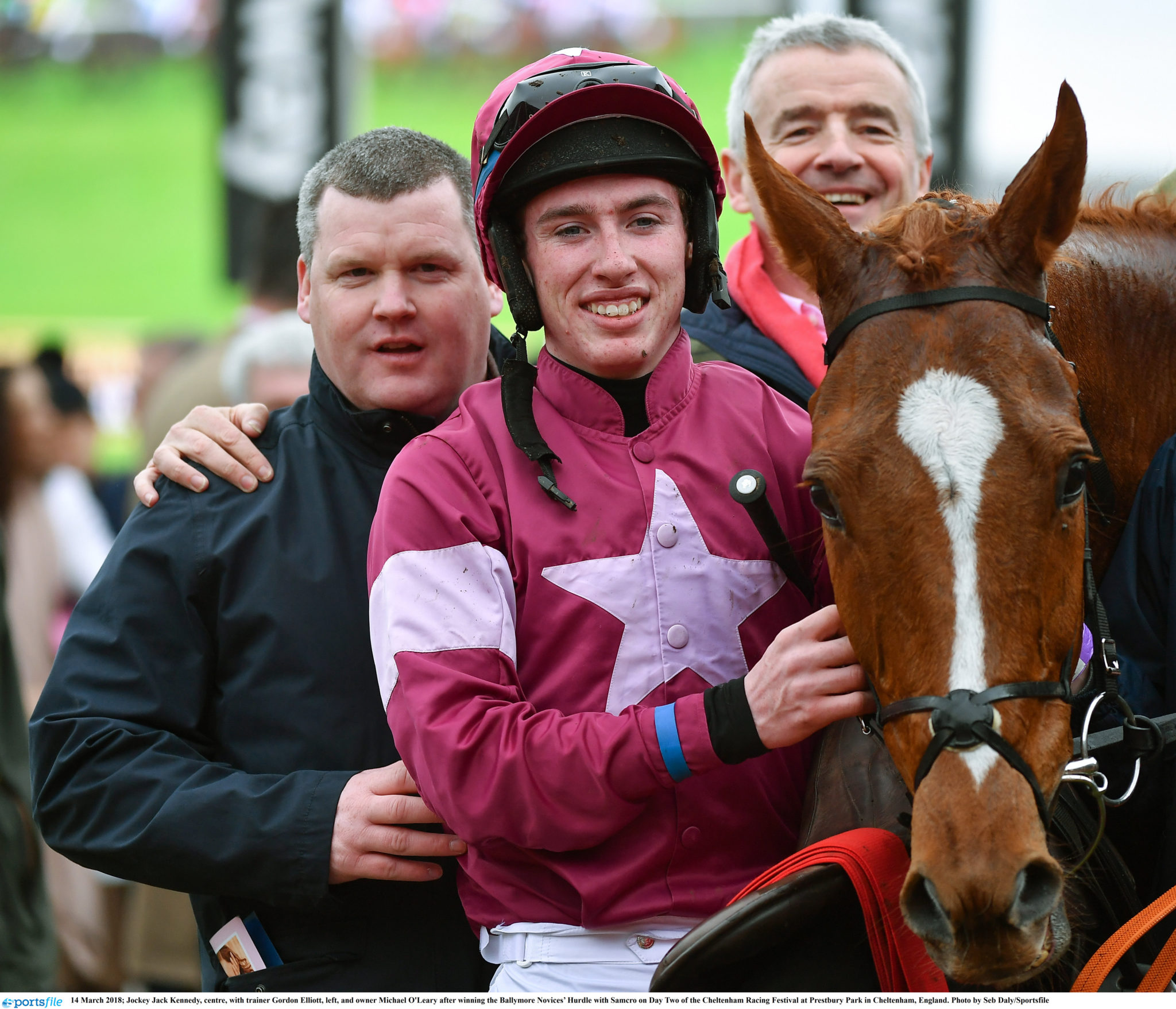 "He's a very good horse and I have been lucky to have him. We went the Champion Hurdle route and that didn't work out," Gordon Elliott said about the horse's career over the last 24 months or so.

"Samcro didn't do too much wrong last year. He won in Down Royal, he fell in the Drinmore when I thought he might have won it.

"Everyone says Cheltenham was a great training feat. It was grand, he won, but for me, Limerick was a terrible training decision. I shouldn't have run him at Limerick on heavy ground.

"I'm not going to make that mistake this year, if there's heavy in the going description he won't be running this year.

"I'm a big supporter of these races but as good a training performance as Cheltenham was, Limerick was terrible.

Gordon Elliott was emphatic when laying out his plans for Samcro this season.

"I would say Down Royal, John Durkan, Kinloch Brae, Ryanair. He'll probably have an entry in the King George [at Kempton] as well but that's what I have in my head." 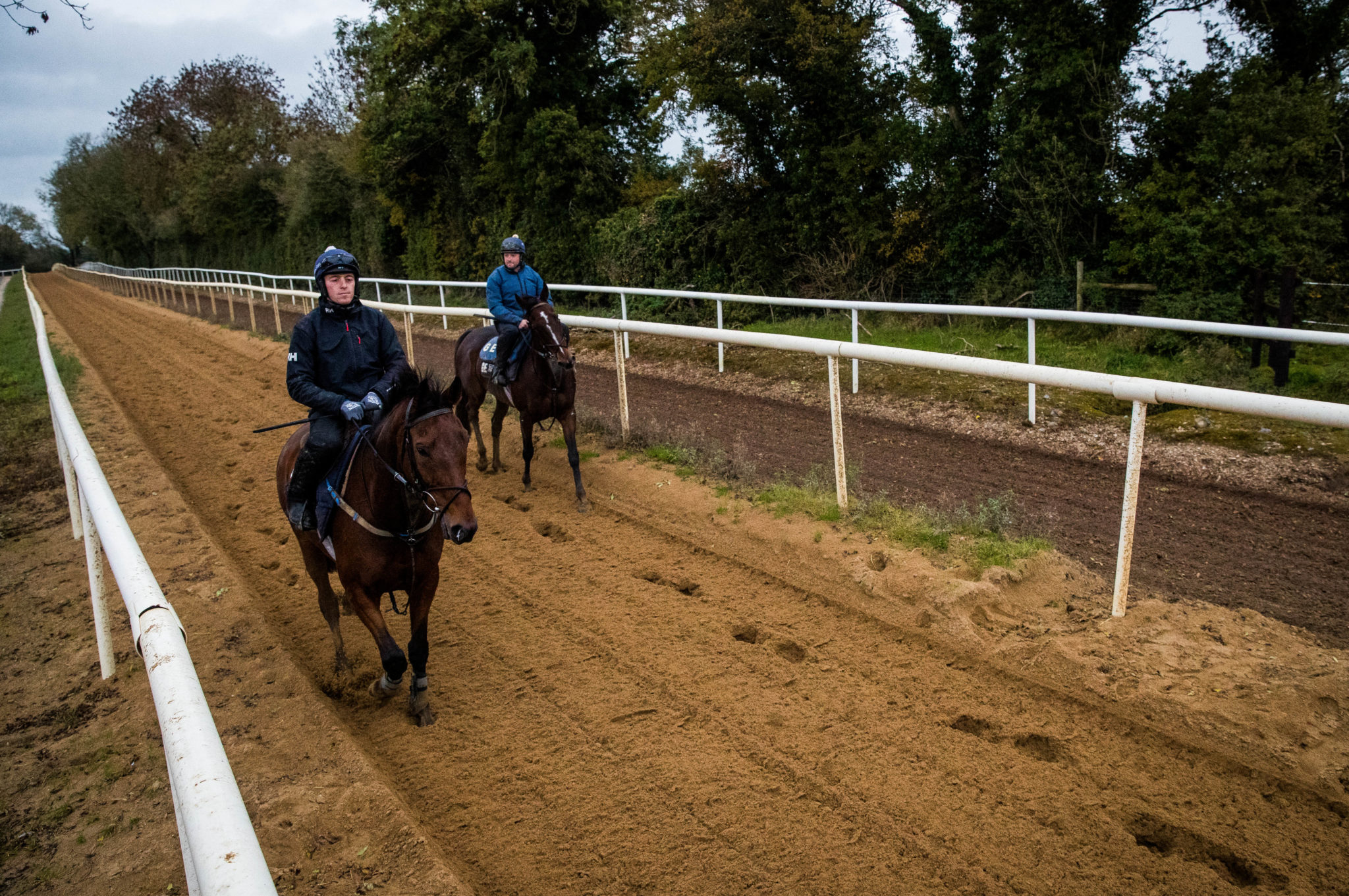 Last year's Supreme Novice hurdle runner up will stay over the smaller obstacles this year, with the Champion Hurdle at Cheltenham his ultimate target.

"He hasn't done much wrong in his career, Down Royal is going to be another step up for him," the Cullentra trainer said.

"We were a bit unlucky in the Supreme, Nicky's horse was very good but we probably got to the front a bit soon.

"Maybe the best horse won on the day, Shiskin, but our lad is a nice horse. He's improved, he's stronger looking."

"It's something we have never really had, a good two-miler quick hurdling horse, so we could probably do with a few more like him."

"Abacadabras is a horse you don't need to work that much, he does enough himself on the gallop. He works hard enough just cantering away [in routine exercise] but yeah, he's pretty quick." 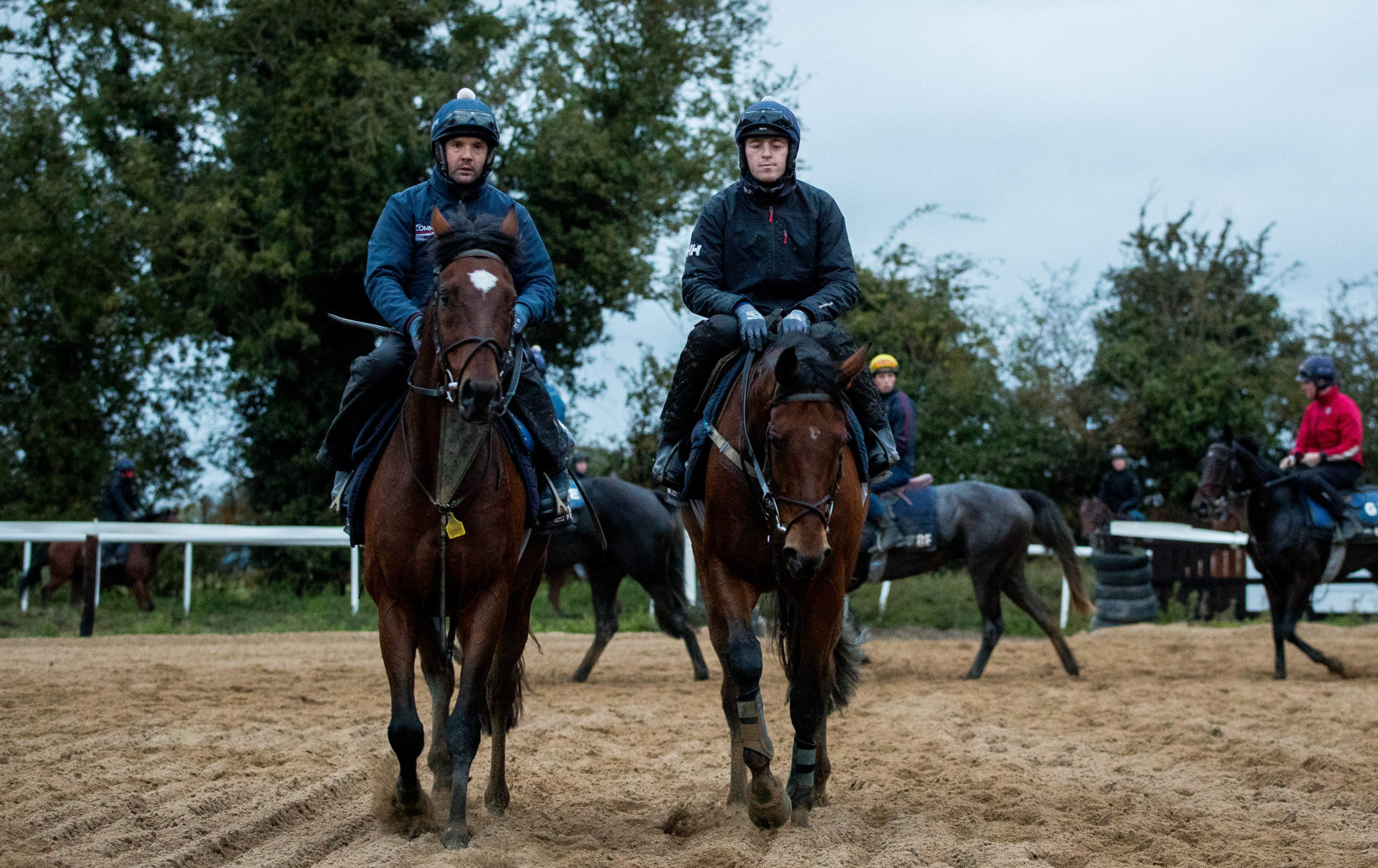 Tiger Roll will make his seasonal debut on the flat at Navan."I stuck him in just to keep my options open," Gordon Elliott said of the dual Grand National winner running on the level.

2020 didn't go to plan with the horse picking up an injury that interrupted his Cheltenham preparation before the Aintree hat-trick bid was aborted due to lockdown. Elliott says he wasn't irritated.

"It wasn't that annoying at all, he had a hard race in Cheltenham and came home a bit stiff and sore behind. The decision about Aintree was made a week or so after Cheltenham so we didn't get a chance to think about it too much.

"It was going to be a tough couple of weeks to get him there because he didn't have a great preparation for Cheltenham. If everything goes well we'll dream a bit this year.

"He's in great form and the better the ground, the better he is [...] He's the horse of a lifetime, everyone who comes in the yard wants to see Tiger Roll.

"Whether it's a schoolchild from Longwood or Summerhill or a Dublin Footballer, the first one they want to see is Tiger Roll." 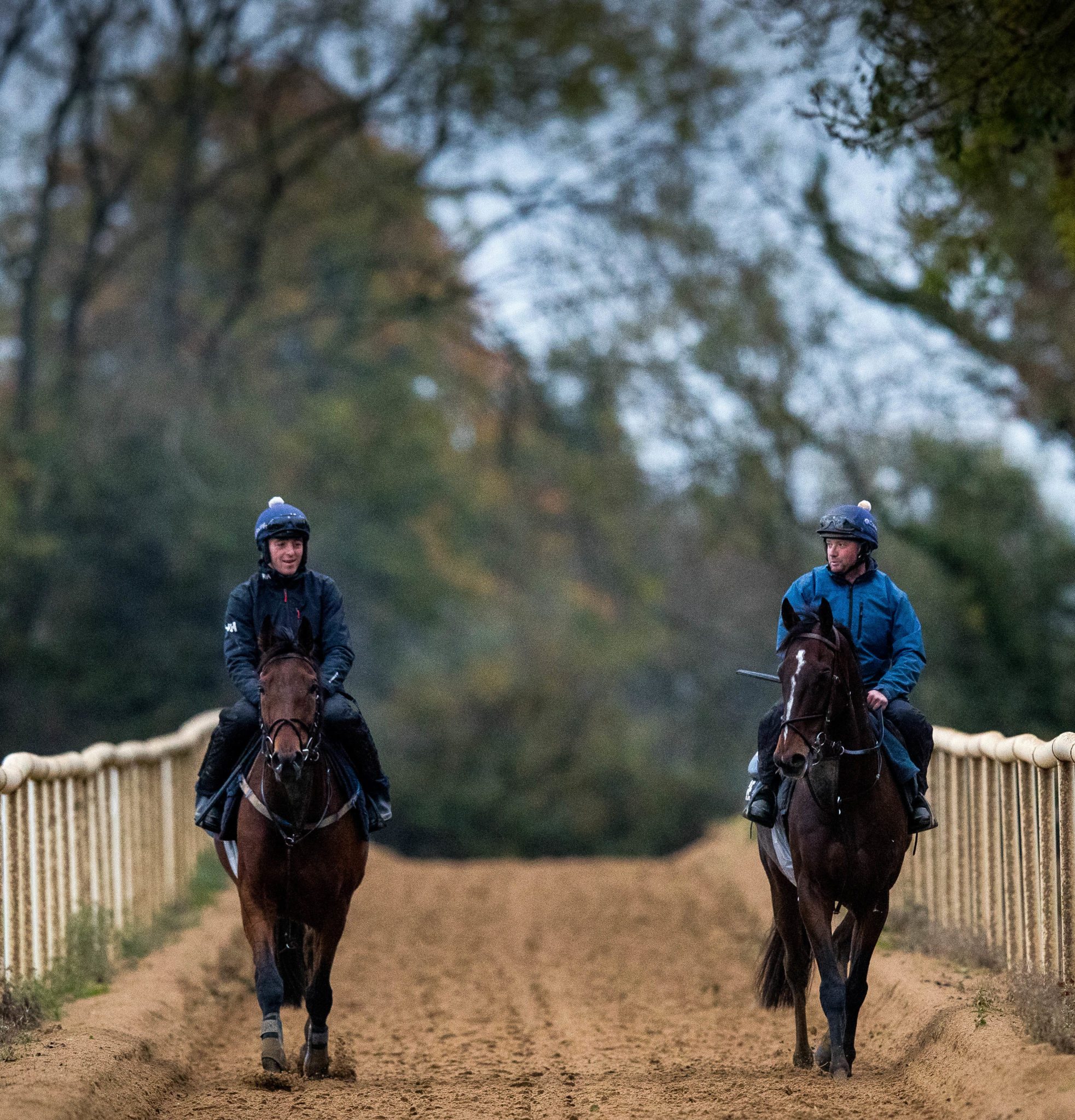 Presenting Percy has been moved to the yard this season by owner Phillip Reynolds having been previously trained by Pat Kelly for whom he won the RSA.

"He's always a horse I looked up to over the last couple of years when I was training, saying he was a horse you'd love to have," said Gordon Elliott.

"He probably has to improve half a stone to be bang there and be a Gold Cup horse. On a few of his runs in Ireland last year he'd be bang there.

"He ran a few good races at Leopardstown last year and in the Gold Cup when he came down two out. He's a horse I like."

Delta Work won two Grade Ones last season before disappointing in the Gold Cup. He will start off at Down Royal where he finished fourth in 2019, Gordon Elliott though, has not lost faith in the horse.

"To be only beaten six or seven lengths in a Gold Cup after the way he jumped I thought was very good. He never got into a rhythm and he wasn't beaten that far.

"He's still only seven so he's a young horse, he's not finished and I haven't given up on him yet."

OTB caught up with Patrick Mullins to hear about the stars of Closutton in our Willie Mullins stable tour.