Gordon Elliott spoke to Off The Ball at his yard yesterday looking forward to racing at two of his favourite tracks, Navan and Fairyhouse. The Cullentra trainer gave updates on some of his stable stars.

As has now become customary for Elliott, he dominated at the two-day meeting at Down Royal. The Summerhill trainer sent out seven winners across the weekend.

Elliott will be keen for that form to continue as the 100 winner mark for the year is imminent and the trainer says he wants that momentum to continue into this weekend, especially at Navan: "It's one of my local tracks and it's a place I love to win at."

In a stable full to the brim with equine talent, trying to isolate the better horses to discuss was the biggest challenge.

Racing fans were filled with hope of a return to 2017 version of Samcro after witnessing his fluent if bloodless chasing debut victory at Down Royal. Gordon Elliott has compared Samcro's write off season to Don Cossack.

"Don Cossack lost his way for a season and came back to win a Gold Cup."

Elliott was keen to take any positives: "The ground was very quick last year so it might have been a blessing in disguise that he didn't go chasing."

After enduring such a miserable 2018-19 season in open hurdling company, Samcro's connections will have been pleased with a winning debut over fences. Down Royal marked his first win since doing the business as the Irish banker at the 2018 Cheltenham festival.

The trainer was happy to have Samcro back to winning ways: "That was a big relief. Nothing happened last year for him, we couldn't get him scoping clean."  (A clean scope refers to a clean respiratory passage).

"He's scoping very well, we built a new stable for him. The new stable has an attached paddock so he can be indoors or outdoors whenever he wants and also keeps him in the fresh air."

The house moving has had the right effect according to Elliott:

"There's no reason this horse can't come back. The horse is in good form now and Shane that rides him most days is happy with him.

The Grade One Drinmore chase at Fairyhouse is next in line for Samcro. The Drinmore is a special race for Gordon Elliott, as it was his first Grade One win in Ireland and he has trained the winner five times since then. Don Cossack among those.

Looking to the future, Elliott says his plans for Samcro are fluid regarding targets, on whether to go up or down in trip:

"Samcro is a class horse - he can go any trip!"

Last year's Cheltenham Champion Bumper winner could not have been any more impressive on his first start over hurdles. His next outing will be at Fairyhouse in the Grade One Royal Bond Hurdle.

"He hasn't too many options, he'll be going for the Royal Bond!"

"This year it will hopefully be the Royal Bond and Christmas. Four or five runs will be enough for him this year." 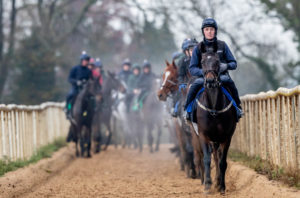 The superstar mare will be odds on to complete the Lismullen Hurdle hat-trick at Navan on Sunday. Assuming she does so, a record fourth win the Hatton's Grace Hurdle will be next on the cards at the Bar One Fairyhouse Winter Festival.

"She's been a star and she's had a wind operation since last year. She petered off a bit in the second half of the season last year, but she did the same the season before. Maybe she's just better before Christmas."

The trainer says he'll be happy if she has another season like last year.

"If she can do half of what she did last year before Christmas, that'll do me. She won three Grade Ones. If she goes back and wins at Fairyhouse, that'll be 11 Grade Ones. She wouldn't owe us much more than that."

The issues for Apple's Jade in the last three seasons revolve around her coming into season at the wrong time from a racing point of view.

Her trainer feels there's not much more they can do about it:

"I couldn't say we could train her much different than the way we train her. She's a mare that just kept coming into season, you just don't know."

Elliott stressed he's taking it day by day with her, but the Mares' hurdle at Cheltenham would be her target should all go to plan over the winter.

The Triumph Hurdle runner-up made an eye-catching seasonal debut when readily winning the WKD Hurdle at Down Royal. The Champion Hurdle has traditionally been difficult to win for five-year-olds but Espoir D'Allen did it in 2019. Coeur Sublime is as short as 16/1 for the feature race on day one of the Cheltenham Festival.

Reflecting on Down Royal, Elliott said: "Yeah, very happy with him."

"He was a horse that was probably very big last year and just wasn't finishing out his races last year. He showed a good performance I thought in Down Royal."

Elliott is aware how difficult it can be for horses coming out of their four-year-old season but Coeur Sublime will stay over two miles, with the Champion Hurdle a possibility.

"We'll keep him at two miles for the moment, I didn't put him in Fairyhouse because he's only four. You could bottom him out fairly easily at this stage of the season.

"He'll probably go somewhere at Christmas, you've got the Grade One at Leopardstown or the four-year-old hurdle at Limerick."

Last year's winner at Limerick was Espoir D'Allen, he went on to win the Champion Hurdle the following March. It can be done!

Batteloverdoyen was a Grade One winner as a novice hurdler but given his sheer size, he's nearly 18 hands tall, chasing was always going to be his game. A chasing debut over fences at Galway saw him win well by eight lengths.

The horse has been difficult to keep sound having only made six public appearances, five of them have seen him return to the winners' enclosure.

Battleoverdoyen is now fit and well and Elliot is keen to kick on with him. The son of Doyen will get an entry in the Bar One Drinmore Chase alongside Samcro, but his future will lie over longer trips.

Elliott said: "He's in the Drinmore, but there is a race in Punchestown for him too. We might split him and Samcro up (in the same ownership). He's a very good horse."

The future for Battleoverdoyen is over further according to Elliott: "Batteloverdoyen is a real stayer, big three-mile chaser in time."

He confirmed his likeliest target later in the year: "Yeah, the RSA."

Apples Jade leads Tiger Roll, Coeur Sublime and Samcro at the launch for the Winter season @NavanRacecourse and @Fairyhouse @gelliott_racing this morning pic.twitter.com/cpYW2CNcPs

A horse that finished fourth in the Cheltenham bumper and second at Punchestown, probably isn't that much of a dark horse. Plenty went wrong in both of those runs but Abacadabras still finished in the frame at both festivals.

The French-bred five-year-old could not have been much more impressive on his hurdles debut at Gowran in early October. Abacadabras steps into Grade three company at Navan on Sunday.

A good performance at Navan could see him stepped up into Grade One company at Fairyhouse alongside stablemate Envoi Allen in the Royal Bond Hurdle.

Elliott said: "He's a classy horse, he ran some race in the Cheltenham bumper last year with Lisa. He was very keen the whole way and finished fourth, he just got run out of it. He was unlucky in the champion bumper at Punchestown."

There's plenty of improvement to come according to the trainer:

"He jumped a bit novicey with Jack first time out at Gowran, but Keith has done a lot of schooling with him since and if he sharpens up his jumping, he's a good horse."