Altior heads a list of 31 entries for the Queen Mother Champion Chase at Cheltenham as, Nicky Hen...

Altior heads a list of 31 entries for the Queen Mother Champion Chase at Cheltenham as, Nicky Henderson's stable star attempts to win the race for a historic third time.

Altior, who was in the headline for the wrong reasons this week,  is looking to become only the second three-time winner of the Queen Mother Champion Chase after Badsworth Boy, who triumphed in 1983, 1984 and 1985. 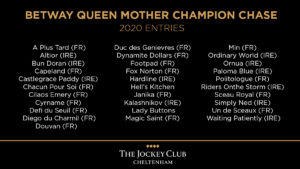 As announced on his Unibet blog this week, Henderson has only given Altior one target for Cheltenham after losing his unbeaten record to Cyrname and missing this weekend's intended return at Kempton.

The two-mile chasing division has been Altior's Kingdom for the last three years, connections are hoping his reign can be maintained in March.

Those nearest to Altior in the market are the young pretender, Defi du Seuil who has been impressive at two miles so far this season and the Willie Mullins trained Chacun Pour Soi.

Mullins has never won the Champion Chase and hasn't held back with his entries for this year's edition, with seven among the early acceptors.

Un du Sceaux came closest to landing the prize when second to the monster Sprinter Sacre in 2016 while Douvan was beaten in 2017 as a 2/9 favourite, picking up an injury in the process.

Cilaos Emery, Duc des Genievres, Footpad and Min complete the Mullins champion chase armada. Incredibly the last five winners of the Arkle Chase are all entered, four of them trained by Mullins.

There are 13 Irish trained entries among the 31, four of them reside at Henry de Bromhead's base in Waterford. De Bromhead will look to add to his two wins in the race with one of A Plus Tard, Ordinary World, Ornua or Paloma Blue.

Thom Malone: Cheltenham tips for day two of the festival