And so concludes the most bizarre US Open - it was wild

Tennis is the ultimate spectator sport when true pressure occurs as it's almost unbearable to watch. The 2020 US Open had observers in its grip and did not loosen that hold until the bitter end.

Alexander Zverev, resisting the overwhelming urge to cry: “They’re always with me in every single tournament that I go to. Unfortunately, my dad and mother tested positive… and they couldn’t have gone with me.

"I miss them. Man, this is tough. I’m sure they’re sitting at home and even though I lost, they’re pretty proud.”

Tom Rinaldi: "You had seven masks with seven names, what was the message you wanted to send?"

Naomi Osaka: "Well... what was the message you got?" 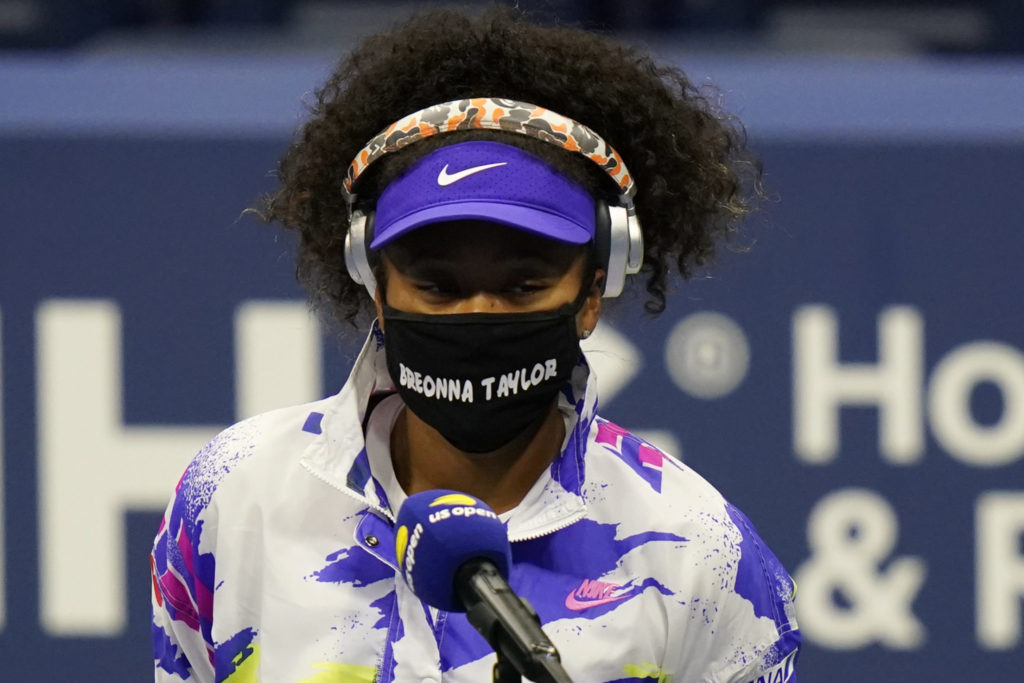 Naomi Osaka, of Japan, wears a mask in honor of Breonna Taylor before her match against Misaki Doi, of Japan, during the first round of the US Open tennis championships, Monday, Aug. 31, 2020, in New York. (AP Photo/Frank Franklin II)

COVID-19 and Black Lives Matter: key components to this year's US Open and an accurate microcosm of modern society today.

Alexander Zverev blew it. Two sets and a break up in his maiden Grand Slam final against his best friend and three-time major finalist, Dominic Thiem. Remarkably, no man playing in the second week of this US Open had previously tasted Grand Slam glory. That is the issue when competing against the Big Three. As mentioned on OTB Sports after the Australian Open, only seven different ATP competitors have won a major since the start of 2006. It is demoralising playing in the same era as Roger Federer, Rafael Nadal and Novak Djokovic. 'How can the three best ever all be playing at once?', every player ranked four and below must presumably ask themselves.

In Thiem, we have an eighth new Grand Slam winner in the last 14 and a half years. The Austrian - beaten in consecutive French Open finals by the greatest clay court player in history and by the ultimate all-rounder at this year's Australian Open - overcame Zverev's early onslaught in New York to claim his first big one at the fourth attempt.

Zverev contributed heavily to an all-time stinker of a Grand Slam semi-final against Djokovic's conqueror, Pablo Carreno Busta. The 23-year-old German won that clash from two-sets-to-love down for the first time in his career, but that is where the plaudits ceased. There were 100 unforced errors in total - 57 by Zverev alone - and 23 breaks of serve.

Later that evening, Thiem beat the 2019 runner-up Daniil Medvedev in three convincing sets despite the Russian spurning set points in two of the three sets.

The result was a foregone conclusion for pundits and fans unlike, until Zverev raced into a two-set lead against a man he is 2-7 against, blowing Thiem away with winners that would eventually total 52, along with a number of aces.

Watch as Ger Gilroy, Nathan Murphy and Colm Boohig dissect the US Open finals on OTB AM:

It was only when Zverev woke up and realised what he was achieving that it all went wrong.

Thiem levelled the match to take it into a decider, but the 27-year-old cramped up, both physically and mentally. Zverev served for the championship at 5-3 in the fifth set, however, his temperamental serve got in his way. He finished the match with 15 double faults, avoiding a fatal 16th facing down his second match point when his second serve of 68mph just crept over the net.

Eventually, Thiem finished him off at 8-6 in the deciding tiebreak as Zverev hit wide. No wonder he was so emotional in the aftermath. Zverev lost this final, but he will be back for more, and so will Thiem.

The point that made him a Grand Slam champion 👇 pic.twitter.com/uYMplH3TF7

Naomi Osaka introduced the theme that Thiem would continue the following day; she really is a trendsetter. The Japanese star was nearly out of sight at 1-6, 0-2 and game point down inside 40 minutes against Victoria Azarenka in the women's final. Deciding enough was enough, Osaka broke midway through the second set and early again in the third before surviving a late Azarenka comeback.

It was Osaka's second US Open championship in three years and third major overall following her 2019 Australian Open triumph against Petra Kvitova.

The 22-year-old became the first female player since Arancha Sanchez Vicario in 1994 to win the US Open final after losing the first set and it was the first time she lost an opening set all tournament, adding to the impressive fightback. In Saturday night's victory, Osaka became the most successful Asian player at Grand Slams. She has overtaken China's Li Na in that regard and is listed by Forbes as the highest-earning female athlete in 2020. Her influence extends far beyond, though.

Osaka has had a major summer as part of the Black Lives Matter movement. She withdrew prior to her semi-final at the Western & Southern Open in protest against the police shooting of Jacob Blake in Kenosha, Wisconsin. The tournament responded in kind, postponing play for 24 hours in solidarity with Osaka, who resumed play the next day. Earlier in the year, she attended a rally in Minneapolis after the murder of George Floyd.

At the US Open, Osaka wore the names of seven different black victims of racial injustice and police brutality on her masks before each round. In the final, the name emblazoned on her mask was that of Tamir Rice: a 12-year-old shot dead by a white police officer while playing with a toy gun in an Ohio park. Osaka's answer to Tom Rinaldi's question has resonated with millions and contrasts beyond imagination to the post-final interview the pair conducted in 2018 after the Serena-Carlos Ramos controversy. Osaka is an icon now, in tennis and away from the game.

For her defeated opponent, it has been a long road to redemption for Azarenka since her return to the game three years ago following the birth of her son. After a long custody battle and a regular struggle for fitness, Azarenka slipped under the radar on the way to this final, despite winning the Western & Southern Open final against Osaka, who pulled out of the decider with a hamstring injury.

Azarenka, who has won the Australian Open twice, was a two-time beaten finalist at the US Open prior to last weekend, but, in this year's semi-final, the 31-year-old beat the woman who bested her in the 2012 and 2013 showdowns. Victory was set for Serena Williams in her last four contest against the Belarusian after the 23-time Grand Slam champion took the first set 6-1. But Azarenka rallied against her old foe - who she had a 0-10 losing record against at Grand Slams - meaning Serena's quest for a record-equalling 24th Grand Slam title continues for the soon-to-be 39-year-old.

She last won a major at the 2017 Australian Open. 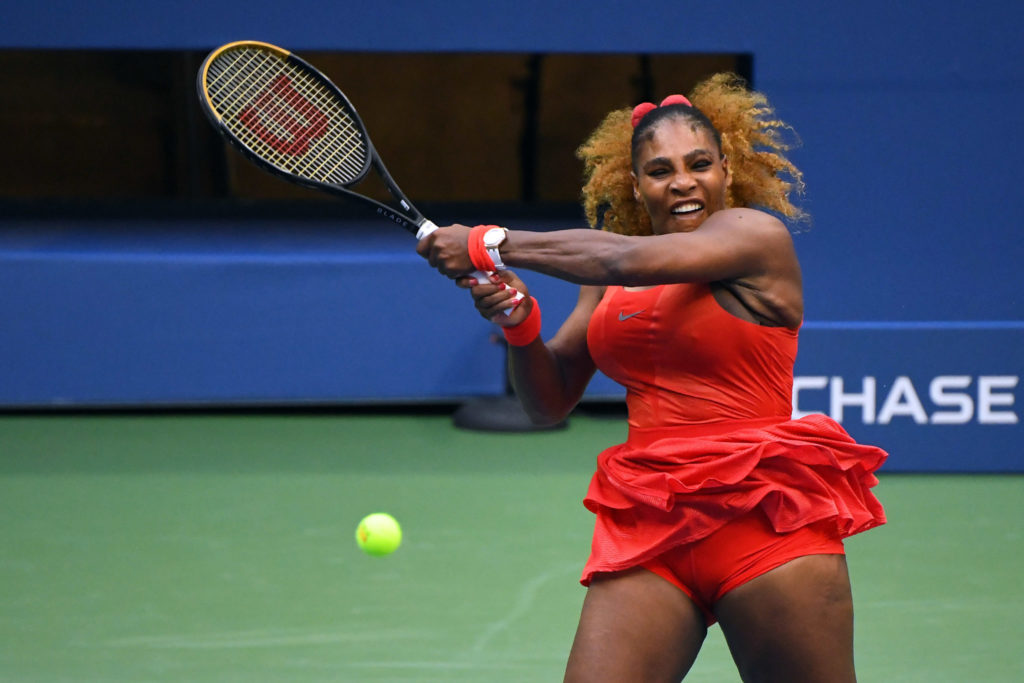 Djokovic had the place to himself. Nadal opted to prepare for Rolland Garros ahead of its rescheduled September 27th start rather than defend his title in New York. Federer, who has not won in the Big Apple since 2008, is recovering from the knee surgery he underwent in June. The finals were also without the COVID-wary Stan Wawrinka, who beat Djokovic in the 2016 final, with the Swiss one of many who chose to stay away. Nor was there any crowd in attendance to potentially derail the under pressure world number one. It was intriguing to hear the occasional bickering between players and their boxes during matches throughout the fortnight.

Surely then the Serb would add an 18th Grand Slam title having won five of the last seven on offer. However, Carreno Busta made life difficult for Djokovic in a tight first set of their fourth-round encounter. Djokovic spurned three consecutive set points (including a Hawkeye decision in Carreno Busta's favour which kept the Spaniard in it), then injured his shoulder before being broken at 5-5. It culminated in lineswoman Laura Clark being struck in the throat with a stray tennis ball and Djokovic leaving the arena almost immediately after his official disqualification in a storyline which transcended the sport.

Where Djokovic's newly co-founded Professional Tennis Players Association (PTPA) goes from here will be interesting but recruitment, which had already suffered obstacles, will be significantly more challenging now. The perception of Djokovic is at a low ebb.

The international incident overshadowed what was a bizarre weekend anyway where the reigning ATP Finals champion, Stefanos Tsitsipas, lost after squandering six (six!) fourth set match points against Borna Coric, tweeting 10 minutes after leaving the court, "This is probably the saddest and funniest at the same time thing that has ever happened in my career". Even that mother-of-all-chokes was insufficient to prize the main headlines away from Zverev's third-round clash with Adrian Mannarino that same weekend.

The match was delayed by two and a half hours as the state of New York intervened in an attempt to prevent Mannarino playing. The Frenchman was one of the players who had been in close contact with Benoit Paire.

Paire withdrew from the US Open on its eve after receiving a positive coronavirus test result. The match eventually proceeded with Zverev using the delay to relax in his suite within the Arthur Ashe Stadium which overlooked the famous court, as he lay shirtless on his lounger. Zverev would win the match in four sets.

There was something funny in the air this past fortnight, no doubt. Teen sensation Coco Gauff quietly exited in the first round as did the returning champion, Kim Clijsters, along with Venus Williams; a back-to-back US Open victor at the beginning of the century.

Jennifer Brady, who only won her first-ever WTA title in Lexington mere weeks ago, reached the semi-final here without coming close to dropping a set, a run which included a 6-1, 6-4 victory over the 2016 US Open winner, Angelique Kerber. A special word too for Carla Suarez Navarro who pulled out of the tournament a week before its commencement after being diagnosed with Hodgkin lymphoma. The twice US Open quarter-finalist will now undergo six months of chemotherapy.

And finally, Andy Murray, who entered his first Grand Slam since basically retiring on court after his first-round loss to Roberto Bautista Agut at the 2019 Australian Open. In a contender for the sporting moment of 2020 so far, Murray came from two sets and a match point down to beat Japan's Yoshihito Nishioka in what was the Scot's first five-set match in 20 months. 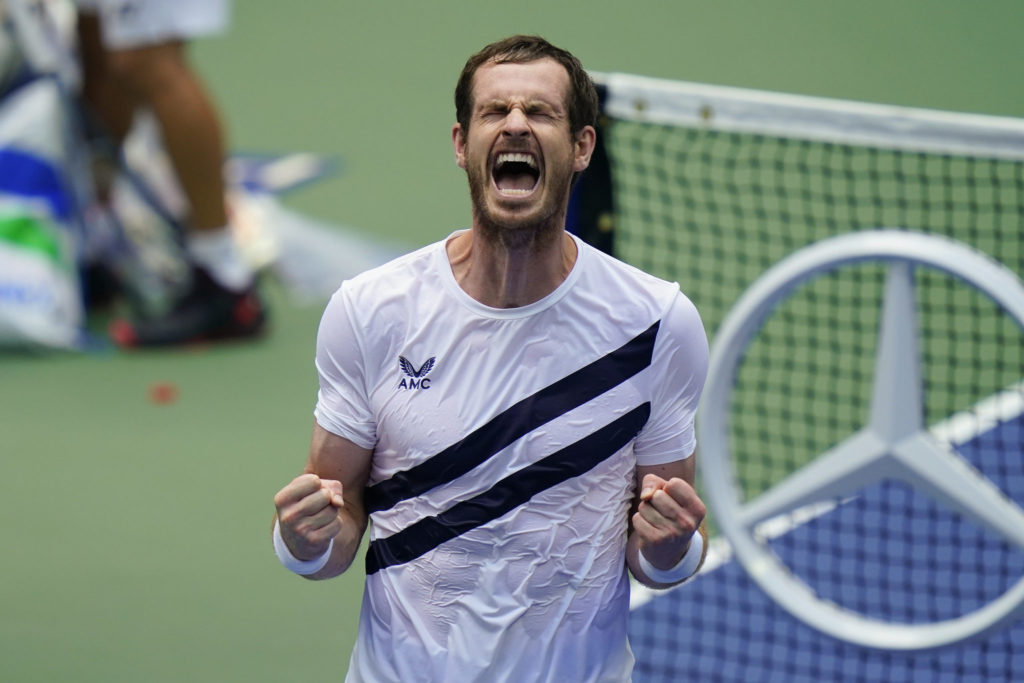 Andy Murray, of Great Britain, reacts after defeating Yoshihito Nishioka, of Japan, during the first round of the US Open tennis championships, Tuesday, Sept. 1, 2020, in New York. (AP Photo/Seth Wenig)

Murray, who has three Grand Slam titles, including two Wimbledon crowns, to his name after appearing in 11 finals, may never come close to adding another major trophy. But that is fine. It is irrelevant, in fact, considering his horrendous hip issues. That may have been his Last Dance moment, and it was a fitting way to start a wild, bizarre two weeks.

The 2020 US Open had no right to be so captivating. Two of the Big Three were absent, the top two women's players in Ash Barty and Simona Halep were not present and neither defending champion, Nadal or Bianca Andreescu, showed. Supporters did not appear and the tournament was played in a nation facing altogether more substantial problems as a country in crisis. This was simply a distraction.

And yet, we will be a long time forgetting this intriguing backwards journey.