Tyler Hamilton was a special guest on OTB AM with Eoin Sheahan and Ger Gilroy on Tuesday morning as the three looked back on the first episode of the Lance Armstrong documentary and spoke about cycling now.

The former cyclist wrote "The Secret Race" with Daniel Coyle, lifting the lid on doping culture in cycling and helping to expose cheats.

Hamilton was a teammate of Lance Armstrong at US Postal and documented the systematic doping regime at the time.

His expose has left him with few friends in the professional cycling community but Hamilton says he sleeps well.

"I hope the sport is in a good place now," says Hamilton, "but I don't know, I'm pretty far removed from it.

"When you tell the full truth, you're out. You could say I spat in the soup, I heard that phrase the other day, I'm far removed from the sport of cycling.

"I don't deal with the pros anymore, so I don't know what's going on there, but I can look in the mirror every day and know I'm on the right path.

"It's exhausting, it ate me up from the inside out. I feel lucky, once in a while I get to talk about it and it brings up all these old emotions.

"For the most part I'm looking forward, I care about cycling."

The ghosts of the past continue to haunt cycling, but Hamilton hopes the future for the sport is bright.

"What happens at the elite level?" wonders The former US Postal rider, "I hope they are doing the right thing today.

"They are catching some people once in a while, which I don't like to see but I feel like it is getting better, but it could be a lot better of we knew some fo the truths from the past.

"Maybe we could get rid of some of these people who are not good for the sport of cycling, that are still involved in the sport today." 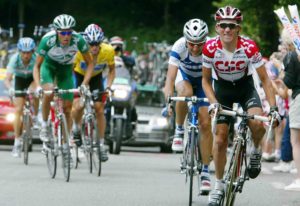 For Tyler Hamilton there have been professional consequences for spitting in the soup.

"I might be working through the consequences for the rest of my life," admits Hamilton, "the Omerta still exists, for sure. I feel it throughout the year.

"So many individuals I used to race against are now in the sport and they don't like me, they don't like that I told the truth. They make me pay for it. I've been disinvited to charity events for stuff I did.

"C'est la vie, but I wouldn't change a thing. Well obviously I would change some things from my past, but I'm glad I told the truth.

"I speak at a lot of schools and speak to kids about the consequences when you make a poor choice like I made and once you go down that rabbit hole, it's hard to get out."