While the Irish-American trail may by now be a well-worn one, Tom Sharkey was among the first to ...

While the Irish-American trail may by now be a well-worn one, Tom Sharkey was among the first to blaze it.

Off The Ball's Ronan Mullen chronicles the extraordinary life & times of a Dundalk-born heavyweight who conquered the boxing world.

Born in Dundalk in 1873, Sharkey had barely shed short pants by the time he set about seeking pastures new. At age 12 he ran away from home, finding work on the Atlantic as a cabin boy.

Hardly a tried or tested route to the prize ring, but his stint at sea did at least put the travails which followed into perspective.

“I’m sure you can imagine the life I was living,” he reflected. “Every single day out there was a fight, harder than any I encountered within the ropes.”

That Sharkey found himself shipwrecked on four separate occasions says more than he ever could.

The last of those instances would amount to something of a blessing for the Louth man, though, three days starving in the Pacific Ocean affording him food for thought.

It was a fateful experience which proved enough to see him bid adieu to cabin duty. And yet, in reality, his spell at sea had only begun.

Aged 19 he cut short a not-so-burgeoning foray into the blacksmith business by enlisting in America’s Naval Force, moving along the east coast in order to ship out aboard the U.S.S Philadelphia.

As it turned out, his service would actually lead him to altogether more exotic environs.

Hawaii hardly represented an orthodox jumping-off point for an aspiring boxer, the Aloha State having always been renowned as a lover rather than a fighter. Alas, given his path to that point, Sharkey didn’t exactly seem a stickler for convention.

It was just as well. Tipping the scales at 5 foot 8, he wasn't merely a break from the heavyweight mould but a different substance entirely.

What Sharkey lacked in height he made up for in heart, though, his work in the army affording him a resilience not taught at gymnasiums. He wasn’t exactly a shrinking violet on the scales either, his 45 inch torso somewhere close to superhuman.

“The massive chest stands out prominently like a gigantic pair of bellows and looks almost twice that of an ordinary man,” observed The New York Times. “He’s not the most gifted boxer, often he just puts his head down and swings for the fences, but he hooks terrifically and will never be outworked.”

His early career was testament to those traits, Sharkey’s first 17 fights producing 16 knockouts.

Whereas those numbers represented something of a coming-out party for the young upstart, it wasn’t until he shaped up against chiselled vet Joe Choynski that he began to truly make his mark. The San Franciscan hadn’t lost in seven years by the time he came up short in 1898.

Such was the magnitude of Sharkey’s victory that he was soon dining at boxing’s top table, a bout with leading contender Bob Fitzsimmons setting him firmly on the path to world honours.

In fact, given that then heavyweight champion James Corbett was injured and out of action, many mooted the contest as a de-facto title fight. 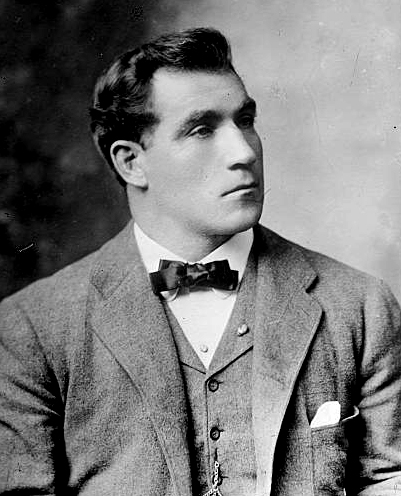 Despite the swathes of anticipation, there wasn’t a level of organisation to match. Indeed, having hastily scheduled the contest for California’s Mechanics Pavilion, resident commissioners somehow conspired to overlook the appointment of a referee.

Local lawyer Wyatt Earp was unceremoniously ushered into the fray at the eleventh hour, and would soon be on the back pages to boot.

With Sharkey strewn on the canvas thanks to a Fitzsimmons uppercut, Earp ruled the decisive blow was in fact worthy of disqualification, noting that the Irishman was already on one knee when he bore its brunt.

Once again Sharkey found himself not just in the public eye but also in the eye of the storm. That contentious win, a la the Choynski one beforehand, was shrouded as much in ignominy as glory, Sharkey beginning to add more asterisks to his record than Ls and Ws.

“This guy has shown to be a rough and tumble fighter of ability,” noted the Milwaukee Journal, “but if he hopes to move on he certainly must change the foul methods which have characterised his work to date. It is very probable that he will never be able to fight strictly within the Marquis of Queensbury rules, and he is likely to lose important battles through his foul tactics. To him, our rules seem to be just annoying restrictions that keep a real fight from taking place!”

Sound but sanctimonious advice, one might say. After all, while Sharkey had indeed been colouring outside the lines, to suggest his avant-garde tactics were wholly negative seemed something of a misnomer. At the moment that particular piece went to print, he had just one blot on a 34-fight résumé, the blip in question coming against one George Washington.

His rise through the ranks didn’t sit overly well with pugilism purists, however. News that the Irish slugger was soon to be paired with America’s own great white hope, James J. Jeffries, was thus greeted with much glee stateside, the giant Californian long-since mooted as the man best-equipped to arrest Sharkey’s development.

Despite ceding almost a stone to his opponent, Sharkey assumed the role of aggressor in the early going.

His boundless will would come to be counterpoised by Jeffries' superior skill, though, the judges eventually siding with the champion once the sixty-minute slobber-knocker t drew to a close.

It was a decision which drew clamorous indignation from those in the Sharkey camp, their man deemed to be on the shorter side of the stick for a change.

And yet, his stock had risen more in that defeat than in any of his triumphs, the US public enraptured by the bravery on display.

A bid to capture the world heavyweight crown had thus begun in earnest, Sharkey embarking on his tour-de-force towards a Jeffries rematch. Top contenders Kid McCoy and Jack McCormick fell by the wayside en route. The then highly-rated Gus Rahlin, for his part, didn’t even make it out of the first round. 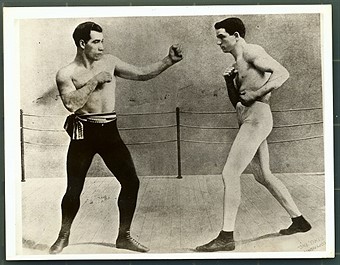 NO QUARTER GIVEN: An artistic depiction of Sharkey (left) following his fight with Kid McCoy

All systems were go for Jeffries-Sharkey II by the close of the century, the pair’s Coney Island clash penned for November of ‘99.

Excitement surrounding the event was further compounded with news that it was in line to become the first fight filmed for use in a motion picture.

Even Hollywood’s preeminent screenwriters would likely have struggled to dream up what unfolded beneath the New York lights that night, however, the frightful exchanges on display making Rocky-Drago look like a game of pat-a-cake.

Each man stepped through the ropes at two minutes past ten, the arena a sweltering furnace that seemed evermore stoked by the second. While it had already been an untypically warm day in New Jersey, the glare emanating from the some 400 arc lamps above the canvas only intensified matters.

As such, and given the attritional nature of their first meeting, few foresaw both combatants hearing the closing bell this time around, least of all the people who’d been charged with filming proceedings! Only as the combatants made to touch gloves for the 25th and final round did the cameramen realise they had no film to capture it.

Thankfully, scribes from all corners were on hand to fill in the blanks in that regard, The New York Times dubbing the slugfest “the fiercest the fight-going public has ever witnessed.” 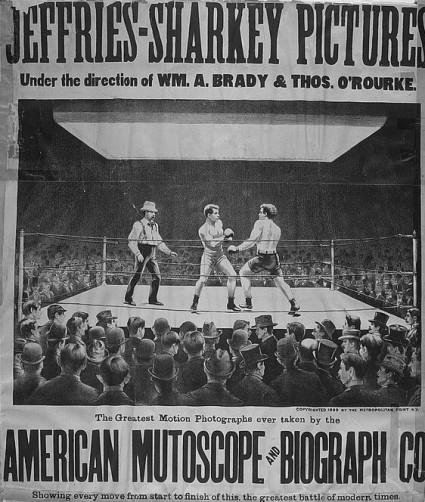 “The extraordinary Irishman stood and took punishment at the hands of the best man in the world,” read the report, “Jeffries turned in shots with such speed and strength that only Sharkey could have received them and retained consciousness.”

Once more the consensus of the crowd didn’t tally with that of the resident scorer, though, Jeffries again awarded the decision in a fight largely said to have been dominated by the challenger.

“The rankest kind of robbery,” said Sailor Tom of the verdict, “and I’m not the only one who thinks that either.”

True enough, many of boxing’s biggest hitters were soon going to bat for him. “Nine out of ten persons in the arena thought Sharkey had won the title,” wrote reporter Charles Mathison. “Jeff was outpointed 18 of the 25 rounds, but that meant nothing to the referee, who was apparently there to ensure the champion remained so.”

For his part, the self-same official - one George Siler - remained unwilting in his defence of the decision.

“How can a guy who had to be taken away in a carriage with several broken ribs, a shoulder dislocated and his left ear split be considered the winner?”

At any rate, Sharkey was left to reconcile himself with nought but a moral victory. His legacy was Teflon nonetheless, the plaudits which greeted his herculean efforts going some way to softening the blow.

Jeffries, for one, would forever dub Sharkey his fiercest foe.

“If ever there was a game fighter, that was the man,” averred the champ. “I split his eye open with one blow in our second battle and his ear started to swell until it was almost as big as my fist. When I landed on it, it was like hitting a big wet sponge. But he wouldn’t think of quitting. He kept coming at me like the Irish Terror he was, boring in non-stop. I broke two or three of his ribs, yet he kept going after me.”

However rich in prestige it may be, legacy alone has never paid the bills.

The lofty heights of Sharkey’s record didn’t translate to his bank balance, the retired sailor-come-boxer engaging in many far-flung ventures to keep the wolf from the door.

Professional wrestling and spoken word events were among the obscure markets he bade to corner, the money brought about by these undertakings enabling him to pursue a more conventional line of work. At age 41 he opened a saloon in New York. Though not quite the Ritz-Carlton, it waylaid its own faithful clientele.

“Customarily the spot was filled with Sharkey partisans who believed without question that he defeated Jeffries, and that he was champion of everything, and that he was willing to take on anybody that denied it!” wrote biographer Robert Cantwell.

Meagre as the bar’s returns may have been, its financial viability was aided in no small part by the frugality of its proprietor.

“This was a man who never spent a quarter without kissing it for luck in the hope it might return to him,” remarked Cantwell.

You can take the man out of Dundalk, and all that.