Rafael Nadal built his human wall once more to triumph for the record-equalling 20th occasion on ...

Rafael Nadal built his human wall once more to triumph for the record-equalling 20th occasion on the grandest stage. It's no Wonderwall, but it's the ultimate sporting party piece.

By the time Nadal was 6-0, 5-1 ahead against the world no. 1 Novak Djokovic in Sunday's Roland-Garros showdown, the Spaniard had committed a measly three unforced errors. Djokovic, 38-0 for 2020 to this point when you discount his infamous US Open default, had conceded exactly ten times that number.

It should be noted, Djokovic had never lost a set to love in any of his 27 grand slam finals. The 2016 winner here (Nadal was injured then) even played well in a first set over 45 minutes long, hitting more winners than Nadal because his hand was forced by the opponent's bloody-mindedness. Still, it took Djokovic 56 minutes to register on the final's scoreboard. Nadal's human wall party piece routine makes for unfair entertainment. You will know this if you have ever played tennis against a wall. The wall does not miss. The wall is infuriating.

When Djokovic laughed incredulously in the third set at the climax of yet another gruelling rally he lost, the 17-time slam champion must have wondered how Nadal secured planning permission for this unfairly advantageous structure.

Fittingly, this was an unjust French Open, commencing four months behind schedule and just 14 days after the US Open final due to the global spread of COVID-19. Every bit as autumnal as feared in advance when originally rescheduled, conditions were wet and windy. Players were cold and uncomfortable, many choosing to wear thermal clothing throughout their matches. At least those who played on Court Philippe Chatrier benefitted from the main stadium's freshly-installed roof when it was required, as it was for Sunday's decider.

Nadal complained about the new, heavier Wilson tennis balls that replaced the tried-and-tested Babolat versions. Only one thousand folks per day were permitted entry on the grounds which made the opening rounds feel post-apocalyptic.

This eerie vibe early on was prescient as prior to the Djokovic contest, Nadal was on court for exactly 13 hours and 13 minutes heading into his 13th Roland-Garros final seeking his 13th French Open victory.

Watch Colm Boohig, Ger Gilroy and Eoin Sheahan debate who is the male tennis GOAT on OTB AM:

We already discussed the wild and bizarre US Open on otbsports.com. Well, this Roland-Garros was odder in ambience and seismic in significance.

Qualifiers Martina Trevisan and Nadia Podoroska had never won a grand slam match before this French Open but each player doubled their career earnings in the last fortnight by reaching the last eight and final four respectively.

Courtesy of a scheduling conflict, Stefanos Tsitsipas and Andrey Rublev played one another twice during this Roland-Garros: once in the quarter-final and also on Day 1 of the tournament - at the German Open final in Hamburg. But hey, 2020 is a well-established unique year by this stage.

History was made at the weekend when both male and female champions won a grand slam title without dropping a set, the first time this has occurred in the open era. While Nadal had achieved this feat three times before at the French Open (2008, '10, '17), Iga Swiatek had not even won a WTA competition prior to these two weeks.

(201011) -- BEIJING, Oct. 11, 2020 (Xinhua) -- Iga Swiatek of Poland celebrates with the trophy during the awarding ceremony after the women's singles final against Sofia Kenin of the United States at the French Open tennis tournament 2020 at Roland Garros in Paris, France, Oct. 10, 2020. (Xinhua/Gao Jing)

The unseeded 19-year-old became Poland's first grand slam singles champion and the youngest French Open winner since Monica Seles in 1992 by beating the reigning Australian Open champion, Sofia Kenin, in straight sets. The most games Swiatek surrendered in a set was four and during her demolition-job victory tour, she defeated last year's beaten finalist Marketa Vondrousova, the former Wimbledon runner-up Eugenie Bouchard and the top seed and 2018 champion, Simona Halep. Swiatek lost in the first round of the Italian Open - the warm-up tournament prior to Roland-Garros - to the world no. 71, Arantxa Rus.

Mere months ago, Swiatek was juggling her studies with professional tennis and has not ruled out a full-time return to the world of academia. Her forehand speed average over the course of this slam was the second-quickest on both sides of the draw, bested only by fellow 19-year-old and bonified future superstar, Yannik Sinner. Swiatek loves AC/DC and Guns N' Roses, unusually does not channel any tennis heroes of the past, and is without a racquet sponsor. In the aftermath of her stunning win on Saturday, she claimed to be rubbish at victory speeches because, "I won my last tournament like two years ago”. You can file this French Open under unorthodox and, while you're at it, dysfunctional. All except for the reassuringly familiar presence of Nadal's Parisian-inspired human wall.

On OTB AM this week, we debated who the greatest of all-time is between the Big Three of Nadal, Djokovic, and Roger Federer. While there are logical arguments for each individual - Federer is the most naturally gifted; Djokovic has had to consistently beat the best; Nadal outlasts anyone, anywhere -  the Mallorcan's indestructible dominance on clay lays claim to officially being untouchable, eternally wedged in a secure case deep within the annals of sporting history.

He has just won his 13th French Open championship and in doing so, has levelled with Federer on 20 as the joint-most decorated men's player. But that basic fact does the hegemony a disservice. Nadal has won 100 of his 102 French Open matches. He lost to Robin Soderling at the fourth-round in 2009 and to Djokovic in the quarter-final of 2015; an out-of-sorts impression of himself in both circumstances. Soderling and Djokovic would each go on to lose their respective finals.

In 2016, Nadal, like the 24-slam-chasing Serena Williams this year, withdrew in the early rounds due to injury. Every other year since first entering and subsequently winning Roland-Garros on his debut against Mariano Puerta in 2005, Nadal has won the French Open. Can any other sports team or person petition for such long-term mastery?

Nadal is not without his slam blemishes. While Djokovic and Federer (2009) have won Roland-Garros only once, Nadal has just a solitary Australian Open crowd ('09) and has not won Wimbledon since 2010. However, in France, he is peerless without fear of being trumped, squashing every type of challenger en route to multiple victories here over 15 glorious years.

And he has done so by unleashing that dastardly party piece of his - the human wall. He will return every ball, make you run until you cannot stand anymore, and drive you to distraction figuring out a counterpunch. All the while, he has suckered you towards the net as you lower your racquet and congratulate him on another satisfying victory.

On the clay of Paris, Nadal is unplayable, immovable, and impenetrable. Whether you are a plucky journeyman or a living legend like messrs Novak and Roger, resistance is futile. You will be the latest victim of this infuriating entertainment at the hands of a humble man in his mid-thirties. 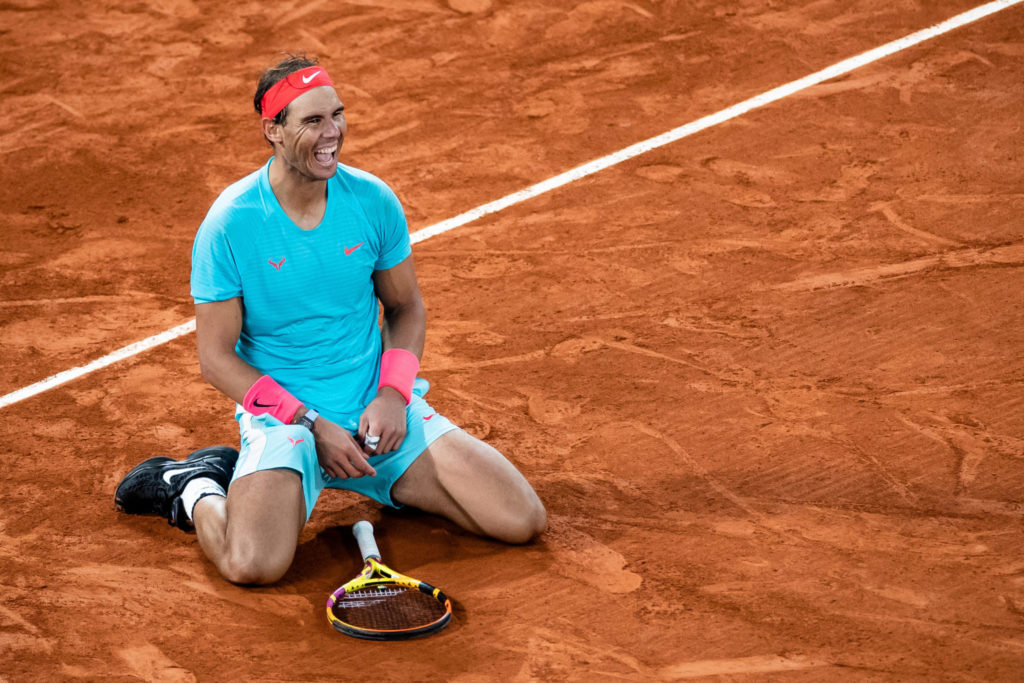 As we prepare to close the mother of all truncated tennis seasons, Nadal (aged 34) and Federer (aged 39) share 20 grand slams, while Djokovic (aged 33) trails on 17 majors, and the same question repeated so often has never been more relevant: who will finish with the highest number?

Perhaps Rafael Nadal is the best ever at what he is best at and, when it is all said and done between the Big Three, this suggestion could make him the greatest male tennis player of them all.

Time will tell, but in the interim, the wall in Paris stays the same. The wall does not miss. The wall is infuriating.

Naomi Osaka continues break from tennis and withdraws from Wimbledon