World number one Novak Djokovic defied all sound and sporting logic to retain his Wimbledon crown...

World number one Novak Djokovic defied all sound and sporting logic to retain his Wimbledon crown this year, 7-6, 1-6, 7-6, 4-6, 13-12. The manner in which he achieved this accomplishment cannot be understated, writes Colm Boohig.

Three years, exactly three years. That was the specific interval between the first and second Grand Slam win in the exemplary career of Novak Djokovic.

He had evolved significantly from a supremely skilful but physically and mentally temperamental talent in those intervening 36 months.

The young Serbian who clinched his maiden major at the Australian Open in 2008 against Jo-Wilfried Tsonga was worlds apart from the Djokovic which regained the same championship in 2011 by demolishing Andy Murray Down Under.

This was the period when Djokovic famously went gluten-free. The dietary diversion and notable improvements in his approach to matches culminated in one of the most dramatic upward trajectories any sportsman has enjoyed. 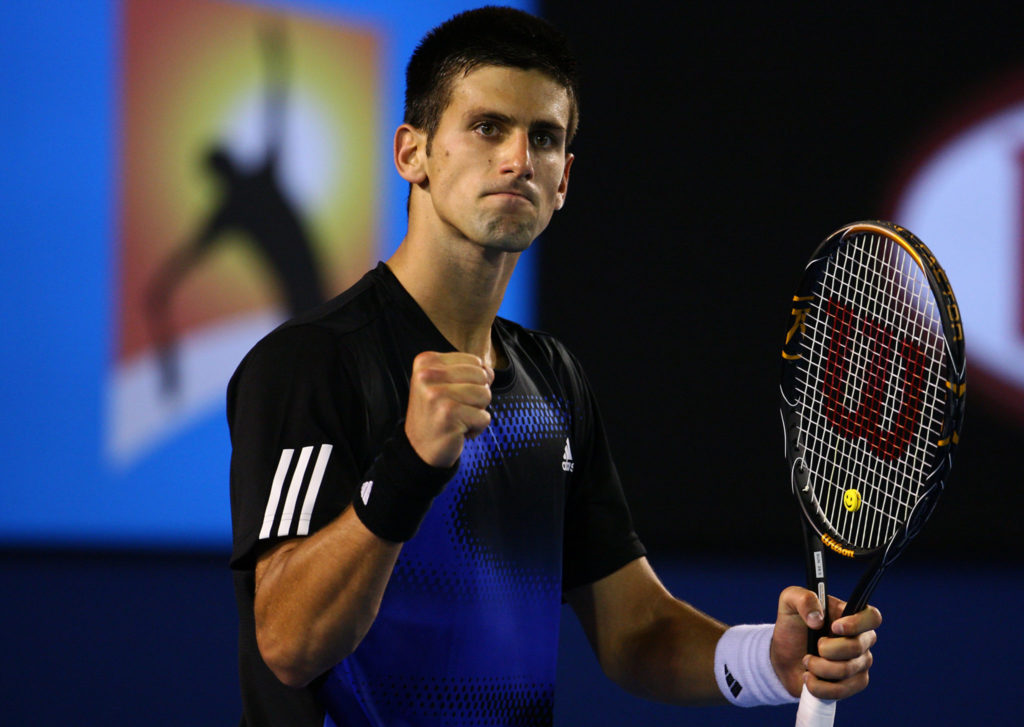 Nobody in the history of the game returns serve better than Djokovic, few can claim superior balance or footwork (Djokovic owes this to his skiing background), and less again have more consistent groundstrokes. In other words, the 32-year-old is the full package.

One of a rare breed to have won every major, Djokovic had added another 13 Grand Slams to the aforementioned Aussie pair, including three of the previous four available, heading into Wimbledon 2019.

Little did he or anyone expect that the final against Roger Federer would be, in the words of the winner, "probably the most mentally demanding match I was ever part of". Djokovic wasn't guilty of an ounce of hyperbole with that statement.

Not since 1948 has a player faced down championship points on Centre Court and persevered to win Wimbledon.

Djokovic had to fight so much more than the stats to claim his fifth title at the All England Club.

Nick Kyrgios infamously claimed that Djokovic has an obsession with wanting to be liked but the Serb had to count on all his resolve to overcome a decidedly partisan Centre Court crowd in Federer's favour... by pretending that they were chanting for him and not the great Swiss.

It was a fascinating insight shared by Djokovic in his post-match victory press conference. The stance was as admirable as it was understandable. The narrative had long been set: this was the Roger Federer final, as it so often is at Wimbledon.

Federer was to be the eldest men's singles winner at Wimbledon had he triumphed. Instead, all he got was the longest Wimbledon match in its history.

The 20-time Grand Slam winner had overcome the undoubtedly romantic semi-final encounter with Rafael Nadal; their first rematch at Wimbledon since the famous 2008 clash between the pair which is oft-considered the greatest tennis match ever.

Djokovic, in the earlier last-four contest, had in Roberto Bautista Agut beaten a first-time Grand Slam semifinalist who was supposed to be at his own stag party. It was hardly inspiring as far as sporting narratives go.

The top seed and world number one was heading into the showdown with Federer knowing that the Swiss maestro hadn't beaten him since 2015 but also being fully aware that few wanted him to continue this unbeaten streak.

Then there was the match that unfolded in front of the world's eyes. Federer, so far statistically superior over the four hours and 57 minutes that it was close to comical, bossed every department of significance. 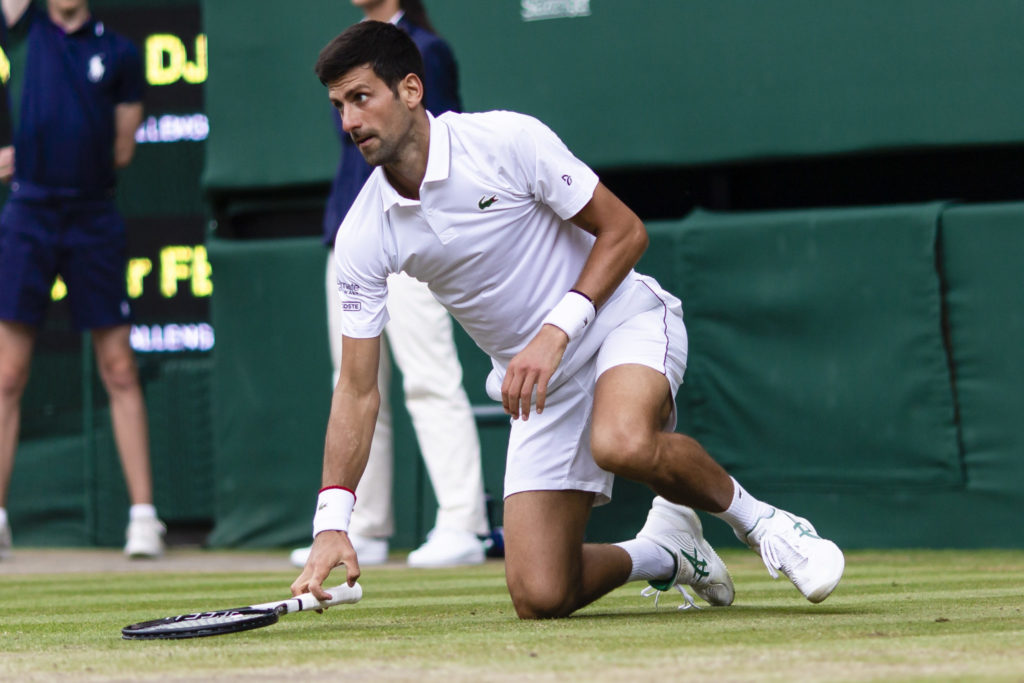 Djokovic, playing with uncharacteristic inaccuracy having breezed through every round prior and having comprehensively defeated Kevin Anderson in last year's final, was trailing on all fronts here in front of a hopeful, passionate crowd.

Federer won more first-serve points (100% of them alone the second set demolition), accumulated more points and games than his opponent, hit 25 aces to Djokovic's 10 and 40, yes, 40 additional winners. Djokovic, in fact, did not get a sniff of a breakpoint until two hours and 45 minutes into the gruelling contest.

Every logical conclusion suggested a popular Federer victory and yet Djokovic, cast curiously as the pantomime villain, withstood the onslaught, survived and claimed glorious victory. Peerless.

Federer was a passing shot away from going two breakpoints up at 5-5 in the final set. But Djokovic's diving volley saved him. Federer had championship points on his own serve having just hit two aces to get there. But Djokovic's resilience and courageous shot selection saved him. 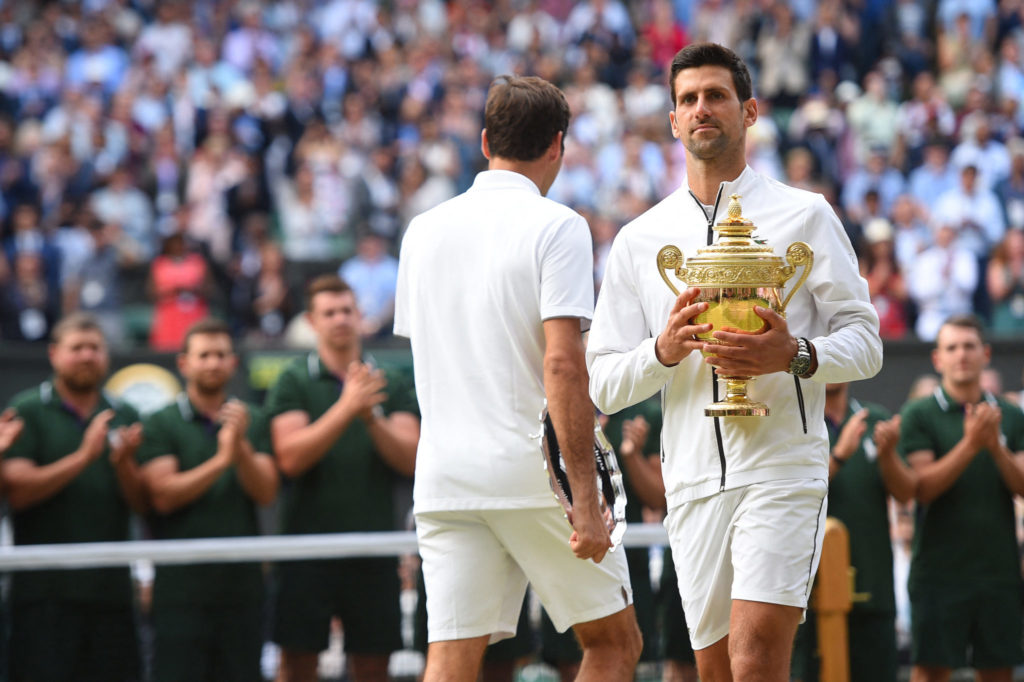 Novak Djokovic (SRB) wins the men final versus Roger Federer (SUI) at the 2019 Wimbledon Championships at the AELTC in London, UK, on July 14, 2019. Photo by Corinne Dubreuil/ABACAPRESS.COM

It was madness. In football terms, three penalty shootouts won over five sets. A genuine backs-against-the-wall job that would have made peak José Mourinho blush.

The Federer narrative since this remarkable match has not abated. The theme is of an ageing icon and doubts about whether a forlorn legend will ever recover, lamenting how the greatest ever threw it all away on the grandest stage. The future documentary practically films itself.

There should be another movie in the making first, though.

Not enough credit has been given to Djokovic in what was, quite simply, one of the bravest acts of sporting survival ever witnessed.

He may not delight, but that is 16 Grand Slam victories and counting, now updated to four out of the last five available. In Novak Djokovic, we are talking about a man who may well surpass Roger Federer in the annals of history to become the best player the sport of tennis has ever produced.

But who will celebrate? We should, we all should.