Lewis Hamilton has strongly criticised the lack of response from Formula 1 to the death of George...

Lewis Hamilton has strongly criticised the lack of response from Formula 1 to the death of George Floyd in Minneapolis on May 25th.

Floyd, an African American, was killed after a police officer kneeled on his neck for over eight minutes, as Floyd all the while said "I can't breathe."

Floyd's death at the hands of a white police officer has led to protests across the United States, with some turning violent and leading to looting. Videos have also emerged of police officers in many other cities and states appearing to use excessive force against protesters.

Six-time world champion Hamilton has taken to Instagram to express his disappointment in his fellow Formula 1 drivers for not speaking out sooner. 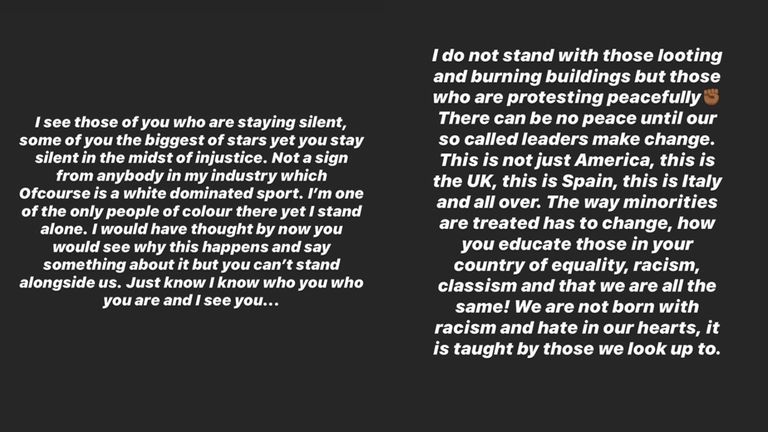 "I see those of you who are staying silent, some of you the biggest of stars yet you stay silent in the midst of injustice.

"Not a sign from anybody in my industry which of course is a white-dominated sport. I'm one of the only people of colour there yet I stand alone.

"I would have thought by now you would see why this happens and say something about it but you can't stand alongside us. Just know I know who you are and I see you."

In a second post, Hamilton added: "I do not stand with those looting and burning buildings but those who are protesting peacefully. There can be no peace until our so called leaders make change.

"This is not just America, this is the UK, this is Spain, this is Italy and all over. The way minorities are treated has to change, how you educate those in your country of equality, racism, classism, and that we are all the same!

"We are not born with racism and hate in our hearts, it is taught by those we look up to."

Ferrari driver Charles Leclerc has since given his own thoughts via his Twitter account, saying he should have spoken out sooner.

#BLACKLIVESMATTER
To be completly honest, I felt out of place and uncomfortable sharing my thoughts on social media about the whole situation and this is why I haven't express myself earlier than today.
And I was completely wrong. 1/3

"To be completly honest, I felt out of place and uncomfortable sharing my thoughts on social media about the whole situation and this is why I haven't express myself earlier than today. And I was completely wrong.

"I still struggle to find the words to describe the atrocity of some videos I've seen on Internet. Racism needs to be met with actions, not silence. Please be actively participating, engaging and encouraging others to spread awareness.

"It is our responsabilities [sic] to speak out against injustice. Don't be silent. I stand #BlackLivesMatters."

Borussia Dortmund star Jadon Sancho is one of a number of footballers to have used goal celebrations to show solidarity with George Floyd and those protesting his death.

Max Verstappen offers a window into a bright (orange) future