A legend of Irish basketball, Kelvin Troy shared the incredible story of how an American college basketball star went on to take Ireland by storm, and marking Larry Bird out of a game.

It may be a little over forty-years since Rutgers' Kelvin Troy met Indiana State's Larry Bird on a basketball court, but the recent inductee into Basketball Ireland's Hall of Fame hasn't forgotten a moment of it.

"You marked Larry Bird who was averaging 36-points a game in college and you held him to 19," Kieran Donaghy mentioned to Troy on the Shot Clock during Thursday's Off the Ball AM.

"No, no, no, no," Troy responded quickly, "I guarded Larry Bird for one half and he only got six-points."

A highly-rated star of the college scene in the late-1970s, Kelvin Troy explored where it all went so right (and wrong) before he left America for good to make his home in Ireland on this morning's show.

In his dual with the future Boston Celtics star Larry Bird, however, Troy demonstrates just how good he really was.

I had played against so many guys in New Jersey who were more athletic, professionals, and I thought they were better than Larry Bird. So, it was easy marking Larry Bird 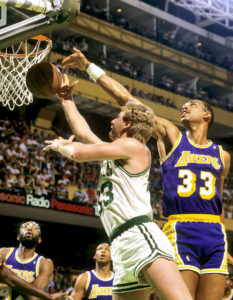 "I thought Bird was the easiest player to guard," Troy said of a player who would go on to win three NBA Championships with the Celtics.

"I had played against so many guys in New Jersey who were more athletic, professionals, and I thought they were better than Larry Bird.

"They were the same height as him, but I played against them all year round.

"So, it was easy marking Bird."

Described by Kieran Donaghy as the best defensive player that Irish basketball has ever witnessed, one wonders how Irish players dealt with a player who dealt so comfortably with the NBA legend.

NBA playoffs suspended for a second night due to protests