The 205 kingpin went all five rounds against Dominick Reyes in Houston's Toyota Centre to earn a razor-tight decision.

It was arguably the champion's toughest test since he first fought Alexander Gustafsson back in 2013 as he had to go all five-rounds against a gutsy Dominick Reyes.

The challenger gave the champion numerous problems throughout the fight, resulting in Jones being floored in the opening round from a hard body shot thrown by the Californian.

Jones asserted forward pressure in the Championship rounds but it was the challenger who came out of the blocks faster. He landed numerous clean shots throughout the first two rounds of the contest, although Jones' edge came more into the fight in the third but it remained razor-close

The challenger felt he had done enough to take the contest but it wasn't to be.

Many scored the fight for the challenger, and he felt that he'd taken three to four of the rounds in the epic contest.

“I truly feel like I won the fight tonight but the judges didn't see it that way. I'm the uncrowned king right now.' Reyes told ESPN.

☠️ The most decorated champion of ALL TIME. @JonnyBones remains on top! #UFC247

"I was in that fight, and the judges didn't see it that way. It hurts. It f****** hurts - I'm sorry for cursing but it hurts. It wasn't even like that, the judges had me getting demolished. I outstruck him so bad the first 3 rounds. The strike counts in the first three rounds, it was ugly. To say I lost 49-46, what is that, who are you. Complete scum; that's a scum move.' added the challenger. 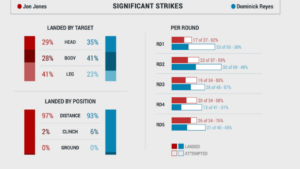 In all honesty, the contest could have gone either way. Jones definitely came more into the fight in the Championship rounds looking to land numerous takedowns in the 4th and 5th rounds.

Jones has flirted with the idea of moving to heavyweight but many including the challenger have called for an immediate rematch but Jones remained coy when asked.

Regardless of how many fans feel about the result, Jones walks away with the 205lbs taking his record to 26-1.

'Why do they all have to be in sports bras?' | Sanita Puspure on body image