"When I quit school at 15, I was just squatting in John Kavanagh's house"

It would be easy to mistake James Gallagher for having more than his 23 years. Appearing on Wedne...

"When I quit school at 15, I was just squatting in John Kavanagh's house"

It would be easy to mistake James Gallagher for having more than his 23 years.

Appearing on Wednesday's OTB AM to exclusively reveal the details of Bellator's next MMA event in Dublin, the Tyrone-native explored the origins of his interest in the sport, and how determination has carried him so far in such a short space of time.

"Since I've been 13 this has been my dream," he explained with all the authenticity of a 10-year veteran. "I left school at 15 for this."

In possession of little or no fondness for his school days in Strabane, Gallagher admitted feeling isolated from those students around him and victimised by his teachers.

"By the time I was 14 or 15, I was behaving like a professional athlete.

"They'd be eating bars of chocolate giving me grief for eating a packed lunch! They're laughing at me and I'm like in shape, shredded, looking after myself."

Under the impression that at 15 he had little or no choice but to persevere until he could legally leave second-level schooling, James Gallagher, despite being uncertain whether his devotion to training and MMA could lead to a career, eventually couldn't stand it any longer.

"People at school were negative," he recalled, "drinking, eating crap - they had no ambition in life and I didn't like it.

"I went in one half-day around Christmas and a teacher started giving out to me for not having my work done, like shouting at me.

"I just said, 'Stop being cheeky to me, I'm not being cheeky to you. I haven't got my work done and that's it. No disrespect to you, I just don't have it done. Don't shout at me please.'

"They didn't stop, telling me I would amount to nothing and that, so I just grabbed my bag and said to one of my friends, 'I'm never coming back here,' and walked straight out the door."

In a demonstration of remarkable faith, Gallagher's parents opted to allow their son to pursue his obsession with one provision: "If you see me slacking at training, put me back into school." 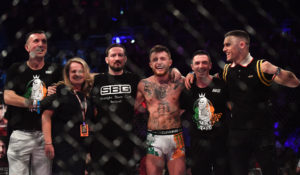 With a 10-1 record to his name and another Bellator event coming to the 3 Arena in February 2020, James Gallagher has made the most of his time since leaving school in Strabane.

As with each MMA success story coming out of Ireland, however, his crossing of paths with coach John Kavanagh played a pivotal role in bringing him to this point.

"Then John just said that if I was ever off school I could come and stay with him, so I did maybe two, three days a week.

"He didn't kick me out for a few years until I started earning a bit of money myself."

Despite living in such close proximity, James Gallagher doesn't believe there is any secret side to John Kavanagh: "What you see is what you get, that is John. There's one John Kavanagh."

"I remember the first time I met him I thought he was a bit stand-offish or something, but he just doesn't waste energy.

"There is no bullshit, and I really, really like that about him. He's honest and straight."

You can watch the entirety of James Gallagher's interview with Off the Ball here.