When Eddie Irvine took the mantle for Ferrari

If you're looking for a scenic Formula 1 event, you needn't look much further than the Austrian Grand Prix.

The A1 Ring in Spielberg is surrounded by rolling green hills and this weekend, the paddock returns to those lush meadows for the latest round of the Championships.

But back in 1999, it set the scene for the start of Eddie Irvine's run at the Formula 1 title.

The man who would go on to win a record seven titles crashed out at high speed after his brakes failed early in the race, ending his title challenge.

And lest we forget, this was the era that Ferrari were reaching their way back to the top after a long title drought.

A drivers' title had eluded them for 20 years and the Prancing Horse had fallen short in the constructors stakes for 16 years.

As the future would show though, Schumacher would lead Ferrari back to the pinnacle, where they would dominate the sport every bit as unrelentingly as Mercedes have been since 2014.

But back in July 1999, they had to deal with Schumacher's injury setback. He would ultimately miss six races and having been the clear team leader, Ferrari needed someone else to grasp the opportunity. Which meant the spotlight switched to a certain Eddie Irvine.

The Northern Irish racer had been Schumacher's No 2 for the last three seasons. But the second half of 1999 would be the year the team would row in behind him and try to propel him to that elusive driver's title.

Which brings us back to those rolling hills in Austria. It was the next staging post for the 1999 World Championship and Irvine's first chance to set down a marker. With Schumacher not finishing the British Grand Prix, Irvine had moved level on points with the team leader and significantly, just eight points behind reigning champion and Championship leader Mike Hakkinen.

Eddie Irvine didn't disappoint. He'd earned his maiden Formula 1 victory at the very start of that 1999 campaign in Australia, so the experience of winning was no longer novel.

With Finnish veteran Mika Salo drafted in as No 2, Ferrari put their resources behind Irvine and he placed third in Austrian GP qualifying behind the McLarens of Hakkinen and David Coulthard.

At the start of the Sunday race, Irvine was stalking the two McLarens into the opening corners. Then the first stroke of luck came his way. Coulthard's car nudged Hakkinen off the track at the uphill Remus Kurve.

That pitched Hakkinen down the placings and Irvine was now up to second behind Coulthard. Much of the attention would be on Hakkinen scything his way back up the order to an eventual podium.

But up the front, Irvine would be the beneficiary of Ferrari's tyre strategy on the Bridgestones. While Coulthard had stopped earlier - and Irvine's future Ferrari replacement Rubens Barrichello also in the mix - Ferrari kept the Co Down native out on track and that paid off.

Irvine was able to build a lead that would keep out front after his own pitstop. It would prove crucial. Coulthard's McLaren had the pace on Irvine's Ferrari in those final laps.

But with track position his, Irvine was able to keep himself in front of the Scot and won it by a razor-thin margin. 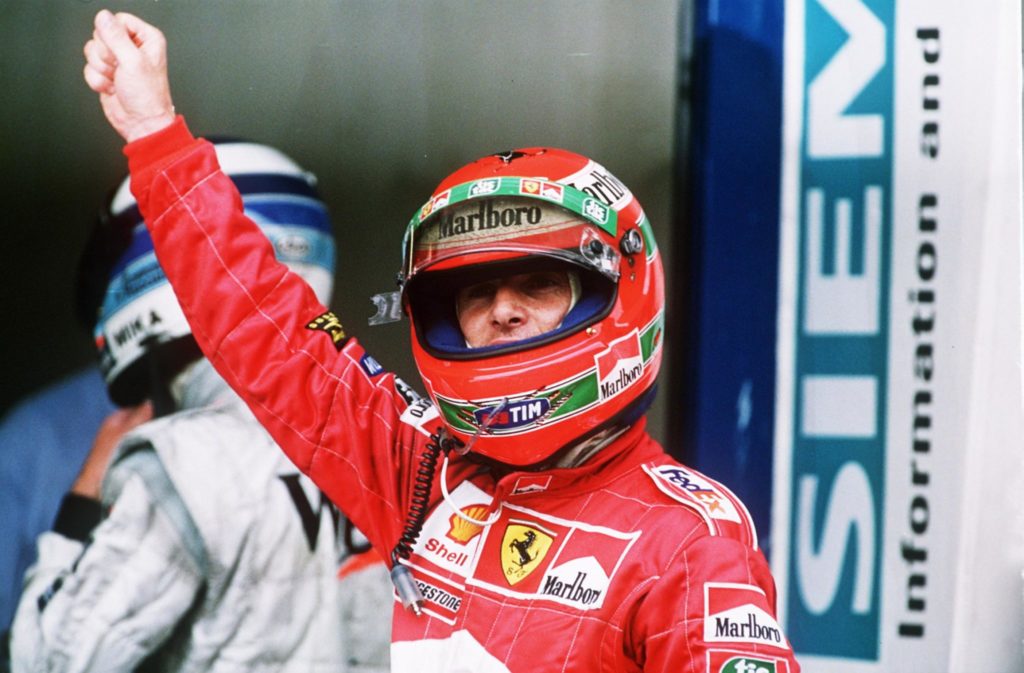 The victory would solidify his place as Ferrari's team lead for the remainder of the season. He'd closed the gap to Hakkinen to just two points at the top of the Championship and proved he could help carry the challenge in Schumacher's absence, winning the next race in Germany to make the most of another Hakkinen setback and taking an eight point lead at the top.

Schumi would return before the end of the season to aid Irvine in his title pursuit. But by that point, the title challenger's fortunes had slipped and Hakkinen had closed the gap by the final race.

Agonisingly for Irvine, the driver's championship was decided by that two point margin in the final Grand Prix as Hakkinen just about retained his crown.

As a consolation, Ferrari would end their constructor's championship in 1999. But when Schumacher finally delivered a first driver's title in 21 years the following year, Irvine had already switched to Jaguar who never got going in Formula 1.

Max Verstappen offers a window into a bright (orange) future

Lewis Hamilton suspects he has Long Covid after podium instability