After the Irish hockey men's team were cruelly denied a place at the 2020 Olympic Games in Tokyo,...

After the Irish hockey men's team were cruelly denied a place at the 2020 Olympic Games in Tokyo, a distraught David Harte spoke to Tuesday's OTB AM.

With seconds remaining in Ireland's decisive Olympic qualifier against Canada last weekend, a late, late penalty decision in favour of the North Americans stripped the Irish hockey men's team of a certain place in Tokyo next year.

"It's been going around the heads of everyone involved for the last 48 hours now," an exasperated David Harte explained on Tuesday's OTB AM. "The on-field umpires gave a wide-ball, no issue, but it went upstairs to the video referral and the video-umpire came back with the decision of a penalty stroke."

Canada's last-ditch attempt to salvage something from the game, hockey's referrals process affords both teams a limited number of opportunities to call the umpire's attention to an incident during a match.

"I still can't quite fathom the decision or the outcome of that and it has cost an awful lot of us a life's work going toward another Olympic Games," acknowledged Harte of Ireland's efforts to back up their qualification for the 2016 event in Rio de Janeiro. "We're all absolutely devastated."

Lives were directed towards this, and we're all devastated. Right now, I can't really start thinking about the future because it is still so raw 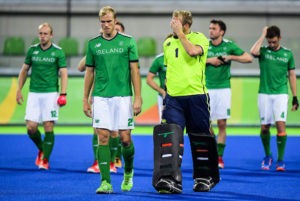 Adamant that the decision made by the video-umpire was incorrect, Harte took further issue with the nature of who had been charged with overseeing this crucial decider.

"The video umpire wasn't asked anything with regards to whether it was a penalty stroke or not," explained Harte. "He was asked a simple question about a body check, that was it.

"He wasn't asked to deem whether it was a penalty or whatever.

"What we found out yesterday that was even harder to take was that I think it was his first time doing the video referral, and it happened to be at one of the most defining and crucial moments of our hockey career.

Although the disappointment of the incident remains raw, David Harte isn't overly hopeful that there will be retrospective action in Ireland's favour.

A damaging event for Irish hockey, an upset Harte can't yet envision how the men's team will progress hereafter.

"Lives were directed towards this," he explained, "and we're all devastated by this.

"Right now, I can't really start thinking about the future because it is still so raw.

"The hardest thing to accept is that I was there embracing some of my teammates who I've played with for 12 to 13 years, and for those lads to have to say, 'Thanks for the memories', it's something that you'd never have foreseen happening in those circumstances.

"I still can't get my head around it, but it is just so cruel."

Twice named the International Hockey Federation's Goalkeeper of the Year, Harte addressed a highly-charged, emotional Tweet that he sent out in the aftermath of the defeat.

Hockey careers ended, Olympic dreams shattered & years (& years) of nothing but hard work & dedication from all players diminished... Honestly still can't believe what happened @FIH_Hockey !!! A decision that will carry pain for a lifetime - heartbroken!!

"The only reason I put the Tweet out was because I couldn't actually physically express myself," he admitted. "I had to do so digitally over social media."

You can watch highlights from Ireland's defeat to Canada and the incident in question below.

You can listen back to David Harte's full interview here.