To mark the release of his new book Chaos is a Friend of Mine: The Life & Crimes of Conor McGregor, journalist and author Ewan MacKenna appeared on Tuesday's OTB AM.

A work that seeks to deliver more than "a simple biography" of an unlikely Irish MMA star, Ewan MacKenna found in Conor McGregor the emblem of a wider societal collapse.

"I thought he was a representation of a very imperfect time and place in society," the journalist and author explained on Tuesday's OTB AM. "I wanted to use him as a projection so much of what was going on around him."

Roughly six years after McGregor entered the Irish mainstream, MacKenna, who has charted the fighter's development from UFC success to the vulgar grandiosity of more recent years, explored what both intrigues and sickens him about the Dublin native.

"He kind of fit into that strong-man, angry, nationalistic, thuggish, loudmouth [character]," he noted of McGregor in comparison with a selection of the world's most notable right-wing political leaders: Jair Bolsonaro, Donald Trump, Recep Erdoğan, Rodrigo Duterte, etc.

"I don't think that is where he started out, [but] I think he would be anything people wanted him to be so long as they paid for it, and that's what they created.

"He was roguish back [when I met him in 2013], but he was a nice, interesting fella who wanted to talk about the philosophy and history of fighting.

"He knew how to play the game, but around that time he went on The Late, Late Show and I thought they could have gone so many interesting ways with that interview, but it was a kind of a clown-act.

"It was cheap, easy and McGregor could see that that was working. I think he decided to go down that line then and it made him a lot of money, but I think it got out of control.

"It was fine to a point, but look at his decline. When you're calling a German of Russian origin a Nazi, or when you're saying, 'Dance for me, boy' to a black person, and everyone around you is saying, 'That's fine, you're making money out of it, therefore, it is ok', I think that can take over.

"It was an out-of-control ego."

The person McGregor chose to be was right on the edge, out of control and crazy. To the point that his salvation was actually getting in a cage and fighting 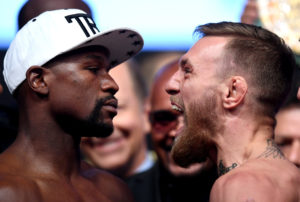 Conor McGregor and Floyd Mayweather Jr square off ahead of their super welterweight boxing match in Las Vegas, USA. Photo by Stephen McCarthy/Sportsfile

A critical study that focuses primarily on Conor McGregor's later years and his most recent UFC clash with Khabib Nurmagomedov, Chaos is a Friend of Mine doesn't so much attempt to demonise McGregor in isolation, rather, it probes the wider social patterns and desires that enabled and emboldened him.

"In terms of celebrity," explained MacKenna, paraphrasing the American sports journalist and author of the book's foreword, Wright Thompson, "there were no major studies.

"In the world of social media, there have been no major or detailed studies delving into the idea of what it is like to be a celebrity in a world with Twitter, Facebook and all these things.

"It has always existed to an extent through magazine and television interviews, but it was an hour here or there. Now, if you are a celebrity, it is constant access and you have to constantly keep being that person [you created].

"The person McGregor chose to be was right on the edge, out of control and crazy. To the point that his salvation was actually getting in a cage and fighting.

"To constantly ... be this lunatic, be this outrageous guy, be abusive and arrogant, to do that 24/7 you eventually become that."

You can watch back Ewan MacKenna's discussion about his forthcoming book in its entirety here.

Khabib: How does McGregor deserve a rematch?

WATCH | What we know: Conor McGregor arrested in Miami