When her uneventful period suddenly started to coincide with puking and the occasional loss of co...

When her uneventful period suddenly started to coincide with puking and the occasional loss of consciousness, Aoife Hall was concerned but, you know, a good period had become a ‘bad period’ and no doctor could offer her any greater consolation.

Four years later, a student of physiotherapy in Edinburgh’s Queen Margaret University, she was rushed to hospital by concerned housemates after she had collapsed.

It was then that Aoife was diagnosed with endometriosis and things were only going to get worse.

Aoife Hall does not sit down between shots when she is bowling.

Somewhere off to the back of the lane, rocking side to side on her feet, she replays in her mind the shot she has just taken in anticipation of her next shot to come.

With remarkable swiftness of thought, there is much to be figured out.

‘Was I comfortable in that shot?’

‘Did I release off the hand the right way?’

‘Did I put enough power on it and lift off enough for the ball to get the rev-rate I’m looking for?’

‘When it reached the pins, did the ball go in at the right angle to the pocket?’

‘How did the pins react?’

‘What way is the oil moving on the lane?’

Occasionally someone wanders over for a chat unaware of the permutations taking place. Aoife multitasks.

Her turn again, she begins walking back to the front of the lane.

“I pick up my ball and clean it with my cloth,” she explains of her process. “I start to concentrate on my breathing then, so my heartrate is lowered.

“I count before I step off and everything else switches off. I’m on automatic.”

The only thing that rarely enters Aoife’s mind is her opponent.

“You’re aware when you’ve let go of a good ball,” she admits knowingly. “I’ve a lot of speed and power in my shot and I can repeat a pattern so when I find my line, I’m gone.

“In any competition made up of multiple games, they always say, ‘Oh, fuck, here she comes.’ This is my go-to place when everything else is going wrong.”

Menstruation hadn’t really given Aoife pause for thought before she turned 25.

By the time she was 29 and diagnosed with endometriosis in a Scottish hospital, the final few years of her 20s had already been plagued by frequent and inexplicable pain.

Endometriosis is a deeply complex condition in which tissue similar to the lining of the womb grows in other places and it had remained asymptomatic within Aoife's body.

Suddenly symptomatic, she would later learn that adenomyosis had been located also; the inner lining of the uterus breaking through the muscle wall in this particular condition.

One alone can cause excruciating pain. To suffer with both is barely manageable.

“I haven’t taken morphine now in 18 months,” she explains, one benefit of the total hysterectomy and bowel resection Aoife decided to undergo in December 2019.

“When you end up in hospital with endo – and I’d have been in there once a month at times – all they would do first is give you this paracetamol on a drip. ‘Eh, I’m in here because I’m on OxyNorm and that’s not hitting the pain – can I talk to someone else please?!’

“10mg of OxyNorm is double what you’re given when you wake up from a normal surgery like, so, to be functioning with that in my system and telling this doctor in A&E that it isn’t hitting my pain… Yeah, I don’t miss those days.”

The constant requirement to justify your pain is a cruel and disturbingly common scenario for ‘endo warriors.’ A term ever so slightly silly at first glance, it reveals something important, nevertheless.

For Aoife and many other sufferers, this is an unrelenting battle with your own body. 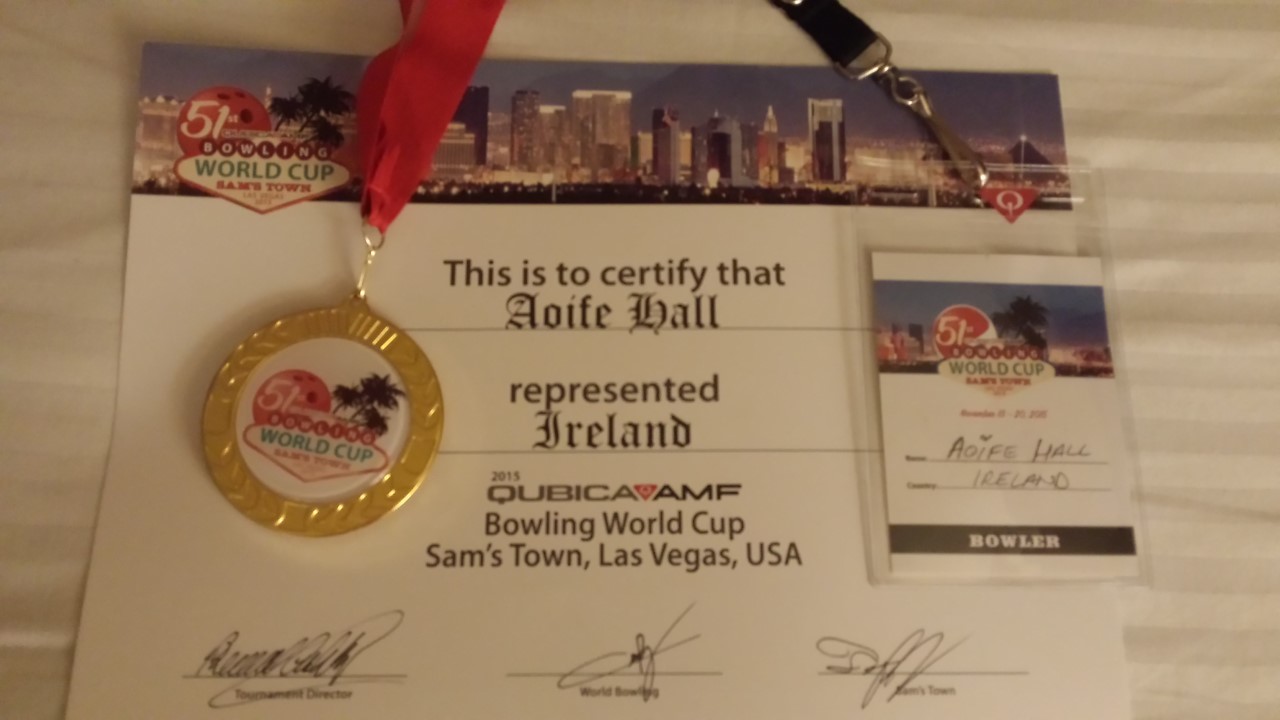 A tenpin bowler by all but birth, Aoife’s prodigious talent manifested itself at a young age.

By 12, the Kildare native was representing Team Ireland. Two years later and her parents were deciding that a 14-year-old was too young to pursue the interest of American schools that treat bowling with a seriousness worthy of her capabilities.

At 17, Aoife became the youngest Irish female bowler to score a perfect game during a sanctioned event.

She considers herself one of the country’s leading bowlers (Aoife doesn’t waste much time with any gender prefixes on that front) and has proved as much at home and abroad.

“Aoife has won too many titles to mention,” admits Mark Delany, the manager of ALSAA Bowl in Dublin where many of Ireland’s leading players compete regularly.

Even so, things could have been different.

“I had a flare up in Las Vegas – vertigo and bleeding – during the World Cup in 2015,” she recalls of one such instance where she was hindered by her condition.

One of two Irish competitors among the 84 nations represented, Aoife needed her father to fly out at short notice and help her to complete the competition.

“I finished 29th,” she notes, “but I’m convinced I could have won if he’d made it even two days earlier.”

Practically speaking, everything from Aoife’s concentration to the depths she can reach getting down on a shot were compromised by her condition.

In daily life, a catalogue of pain medication is usually presented to sufferers in lieu of any lasting remedy: Amitriptyline for sleeping, and Targin, Tramadol and Solpadol to go with OxyNorm on the list of opioids Aoife has at one stage or another been prescribed.

No such relief is allowed for competitive sportspeople, however. Anti-doping regulation prohibits the presence of these medicines when Aoife takes to the lanes.

“I’d be coming off and have to lie down,” she notes of the toll competing with insufficient painkillers has taken on her. “I’ve won the nationals and passed out in the back seat of my car with the pain.

“Bowling the Triple Crown with Ireland up in Belfast, a five-day event, I had to go out onto the ice-rink afterward and lie down on my stomach to reduce the pain.”

Aoife is aware of how easily people can disregard her devotion to bowling. Lifelong friends have been made on the lanes in ALSAA, however, and even her fiancé Paul bowls competitively for Team Ireland.

When she ultimately decided on the hysterectomy in 2019, Aoife took a chance on a quality of life beyond what she was living. No small part of this decision was made with bowling in mind.

To definitively rule out having children as both she and Paul would have envisioned though, it was a cruel ‘solution’ that no couple in their position can be entirely grateful for.

A pediatric physiotherapist by trade, although Aoife knew she was making the correct decision for her life, it flew in the face of instinct.

And yet, as she reacquaints herself with some semblance of comfort such as that surgery has allowed, the actual decision reveals nothing of the harrowing journey she had been on to that point.

The real trouble with endometriosis begins with the diagnosis.

Before a laparoscopic incision provides camera footage of its presence, there is no definitive way of determining that this is why someone is suffering with unbearable cramps, heavy menstrual blood loss, pain during or after sex and excessive bloating.

Its elusiveness preempts uncertainty, indecision, and an uncomfortable arrogance in some sceptical doctors whose first instinct is one of disbelief.

In terms of severity, Aoife’s stage 4 endometriosis is as bad as it gets.

She has lost count of how many times her abdomen has been inspected with a laparoscopic camera, and her total number of surgeries now stands at nine.

Troublingly, her treatment never needed to be so devastating, and it is this that deeply frustrates Aoife and has inspired her to speak so openly.

Reflecting on conversations with the doctor who finally advised a hysterectomy to be the best choice she could make, numerous misguided and dangerous pathways Aoife had been brought down previously come to mind.

“I couldn’t walk for ages after my first operation,” she remembers, her attentive father opting to pursue a second opinion that ultimately resulted in Aoife going under the knife again.

“They did a radical clear-out of endometriosis and the doctor basically told my Dad that he had saved my life because of this residual stuff that had been left behind in that first surgery.”

Due to the hormonal implications of pregnancy and its suppression of menstruation, Aoife, like many others with her condition, was then actively encouraged to conceive.

Indeed, the doctor who would ultimately perform Aoife’s hysterectomy was attempting to determine the feasibility of pregnancy when she discovered what someone else should have earlier identified.

“When I woke up the doctor had all my scans and pictures from my womb,” she recalls, momentarily upset for the first time in our conversation.

“The doctor turned to me and said, ‘I don’t understand why they have done so many surgeries on you because all they have done is prolonged the inevitable.’

“My condition was so bad that my womb was essentially heart-shaped from it. I was told then that I could never get pregnant and that I should never have been offered fertility treatment.” 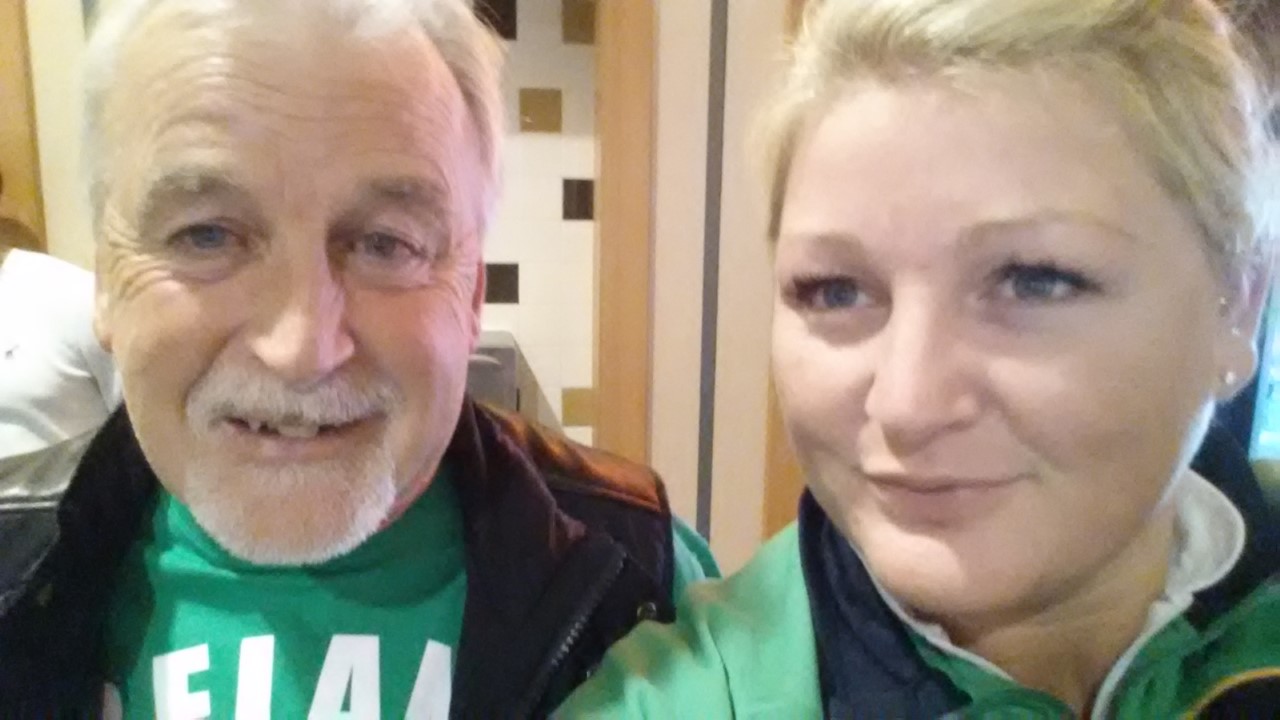 Aoife pictured with her father after he flew to her aid in Las Vegas: "He's my rock."

When her parents were still a young couple arranging dates, it had been Aoife’s mother who decided that a bowling alley might be more fun than a night in the pub.

“My Dad got really into it,” explains Aoife, “and when myself and my brother came along then we were introduced to it too.”

The bowling alley in ALSAA became both a refuge and reason to carry on during the dark days of this last decade. It is where Aoife goes to socialise with friends and where throughout it all she retained a clear sense of purpose.

“Even at times where she has been unable to play,” the alley’s manager Mark Delany tells OTB Sports, “she has always been on the lanes to offer help or advice.

“She even became the men’s team manager for a recent tournament in Scotland. Her passion and enthusiasm for tenpin bowling is what’s needed for our sport to succeed.”

This dedication is all part and parcel of the relationship Aoife has developed with the sport and those she plays, trains and competes alongside.

"They do an awful lot for me too without making any big deal about it," she remarks on numerous occasions of the care shown for her by the bowling community in Ireland.

"We mind each other. There's that mutual respect as bowlers, but there's also a deep friendship there too."

Time has not stood still and she will never really know what could have been achieved.

Yet, three months and one week after undergoing the hysterectomy, she was back on the lanes determined to make good on her talents.

Aoife Hall does not stand still either.

Rocking side to side on her feet at the back of the lane, calculating her previous shot and her next shot to come, she will never stop working to find that rhythm.

If you have any questions regarding endometriosis, visit the Endometriosis Association of Ireland's dedicated web page here for more information