Ardal O'Hanlon was our latest guest on The NOW TV OTB Culture Hall of Fame - as the Monaghan ma...

The Father Ted star joined Ger and Eoin on OTB AM to talk life at the moment in lockdown, his love of tennis, the process of writing a novel, and plenty more.

Deadwood is set in the 1800s - in the eponymous town in South Dakota where law and order is far from prevalent. O'Hanlon says he rates it incredibly highly.

"Deadwood is one of those great HBO series... it's set in the Old West [and] it's just a rollicking great story, but it's so much more than that.

"Its really funny, it's entertaining, the characters are brilliant, the sets are incredible, but it's the ambition of it that I love.

"On the surface it's about the Old West and it's about this gold-mining town where you have all these renegade characters, but after a few episodes it begins to dawn on you that it's actually about so much more than that!

"It's about civilisation itself, and you literally watch this town, this little gold-mining settlement, being built brick by brick over the course of the three series that were made.

"People learn that they have to live with each other, so all these outlaws and villains, and they're the most dastardly villains in TV history, I mean they're just brilliantly drawn characters."

The language in the series is another aspect that jumped out at Ardal in terms of what makes Deadwood different.

"The creator David Milch, who is a legendary character, he kind of invented a language for it. People would call it Shakespearean... but it is actually based on that Elizabethan era sort of language.

"It's really filthy and profane, the insults in it are second to none. It's kind of biblical as well, a lot of biblical references. He is using the Bible and Shakespeare for this invented language that is supposed to kind of represent the language of that period." 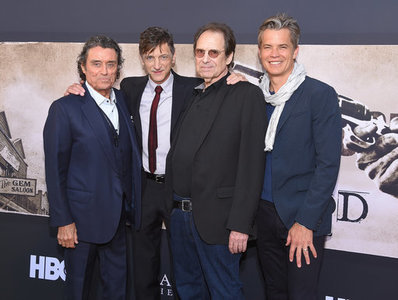 When asked how it compares to some of the other TV series that are generally considered among the best of all time, Ardal says Deadwood deserves its place among them.

"I know this is sacrilege, but I can take or leave The Sopranos. The Wire I absolutely loved, and I think The Wire you can speak about in the same breath as Deadwood.

"It's equally ambitious. It digs really deep into the institutions that keep society just about together. We see how fragile it is, you see [it] with the killing of George Floyd.

"They're as good as anything ever created in the arts - any great painting, great novel, those guys would have been the Dickens' of our time."

Episode Nine - Gavin James on Back to the Future.