P.J. Delaney is still smiling after his journey to hell and back

One week after the All-Ireland hurling final in 1999, Kilkenny's P.J. Delaney suffered a life-threatening head injury when he was attacked outside of a nightclub in Thurles. He talks to OTB Sports about his journey from there to here.

On the second Sunday of September 1999, P.J. Delaney played the last 6 minutes of an All-Ireland hurling final for Kilkenny.

With Cork 0-12 to 0-11 ahead, he replaced John Power and moved in at full-forward. His impact was immediate; Delaney’s blocked shot making its way to D.J. Carey in front of goal.

It could have been the winning of the game, but Carey, who did not register a score that day, was closed down. Joe Deane soon extended Cork's lead to two points, before Henry Shefflin halved it again soon after.

That was it, however. Kilkenny lost.

Sixty-four minutes watching from the bench and a few moments in the action, P.J. Delaney remembers absolutely nothing about the match.

Where his memory kicks back in a few weeks later, he is lying in a Cork University Hospital bed. Unable to walk, unable to talk, his last 11 days have been spent in a coma.

“It took two weeks of intensive physiotherapy to learn how to walk again,” he recalls, two more years spent working on it in rehab not quite enough to exactly restore his prior mobility.

“Head injuries are different to breaking your arm or leg, you know. It is very, very complex.”

If he didn’t know it then, P.J. realised quickly enough that those few minutes in Croke Park represented the last meaningful bit of hurling he would ever play.

Twenty-two years on, he still considers himself an incredibly lucky man.

Star hurler P.J. Delaney is in a critical condition after an early-morning attack, in Thurles yesterday, left him with a fractured skull. Delaney, 26, was in a critical but stable condition at Cork University Hospital last night, where he had been transferred from Cashel hospital to undergo emergency surgery… Mr. Delaney’s parents, Pat and Eileen, and his sister Ailish, were keeping a bedside-vigil at the CUH intensive care unit, where Cork’s Brian Corcoran, was among the visiting well-wishers. P.J.’s younger brother, Podge, put on a brave face and togged out for the Kilkenny team who beat Galway in yesterday’s All-Ireland Under-21 Hurling Final at Tullamore. Another brother, Finbar, is in America. 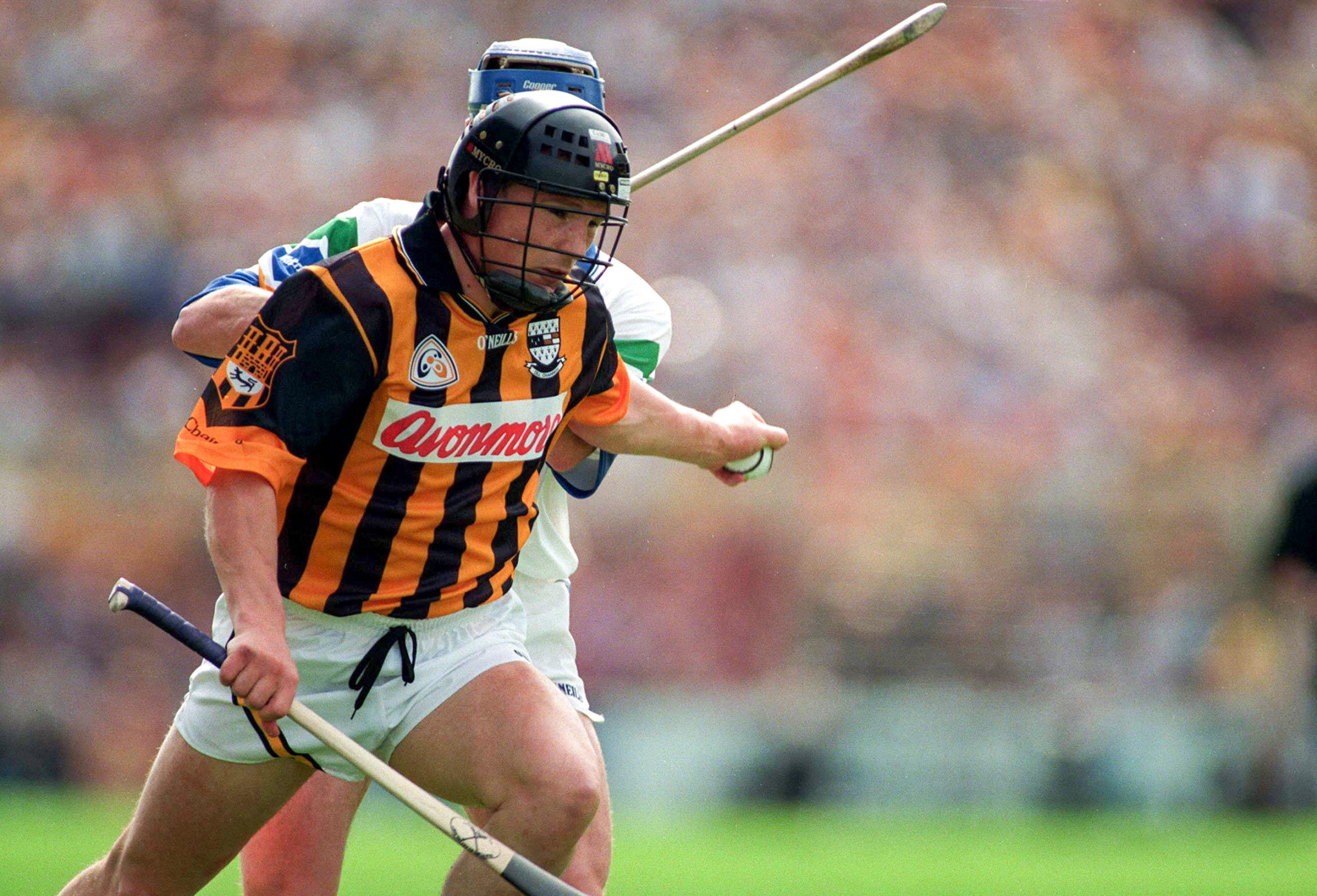 16 August 1998; P.J. Delaney of Kilkenny during the All-Ireland semi-final against Waterford | Sportsfile

One week after the 1999 All-Ireland final, P.J. suffered a life-threatening head injury when he was attacked outside of a nightclub in Thurles.

After he and a few friends had made the short journey from north Kilkenny on something of a whim, his inter-county status took this brutal incident nationwide.

A Kilkenny hurler attacked on a night out in Tipperary, it stoked all sorts of idle speculation.

“What in God’s name could justify placing a young man’s life in danger because he possibly played hurling for a different club or county,” exclaimed one angry letter writer.

“I am quite certain the GAA was not founded in 1884 in Thurles on this principle.” Indeed.

The truth was less sensational, but vindictive, nevertheless. In the wrong place at the wrong time, P.J. was the random victim of an horrendous attack.

“I was lucky enough to come out of it not remembering the incident,” he asserts on more than one occasion. “That memory was taken away from me and that was a very lucky thing.”

The night before he woke up in hospital, roughly 1,000 people attended a mass for him in his home village of Johnstown. It was a show of support from his club Fenians and the local community that would continue thereafter.

“I know of people who went into hospital at the same time with similar injuries to me,” he recalls now. “A lot of them didn’t make it and I’ve been fortunate to survive.

“I’ve been very unlucky and lucky as well. You can be glass half-full, or half-empty, it depends how you look at it.”

Michael Lyster: “Interesting too at full-forward, P.J. Delaney goes into this game as a very young player with no expectation on him.”

Jimmy Barry-Murphy: “Yes, he has played very, very well, particularly in the semi-final he linked up brilliantly with D.J. Carey for a spectacular goal.”

After scoring 2-4 on Kilkenny’s run to a third successive All-Ireland final, his goal (from a total of 1-4) against Galway in the decider proved decisive.

A combination of fearlessness and a clever reading of the ball’s flight made that moment possible. To understand his capabilities fully, however, his subsequent link-up play with D.J. Carey is revealing.

Hurler of the Year in waiting, as Carey gathered a loose ball with only Delaney’s goal separating the sides and minutes remaining, the full-forward fashioned some space for himself inside.

Without an angle to shoot at, Carey looked across the pitch and spotted him. The pass that followed – deceptively casual – connected with Delaney where he stood.

One touch to control and shape the beating of his man, a second to take the ball to hand, Delaney leaves the Galway defender in his wake and slots over the point that gives Kilkenny a four-point lead.

Easily forgotten in the excitement that ensued, it was a tremendous example of two hurlers on a shared wavelength.

“He was the most incredible player,” Delaney stresses, a little lost for words trying to sum up Carey. “The greatest player I ever played with.

“It is genuinely hard to explain how good he was. D.J. had the x-factor and a little more than that too.” 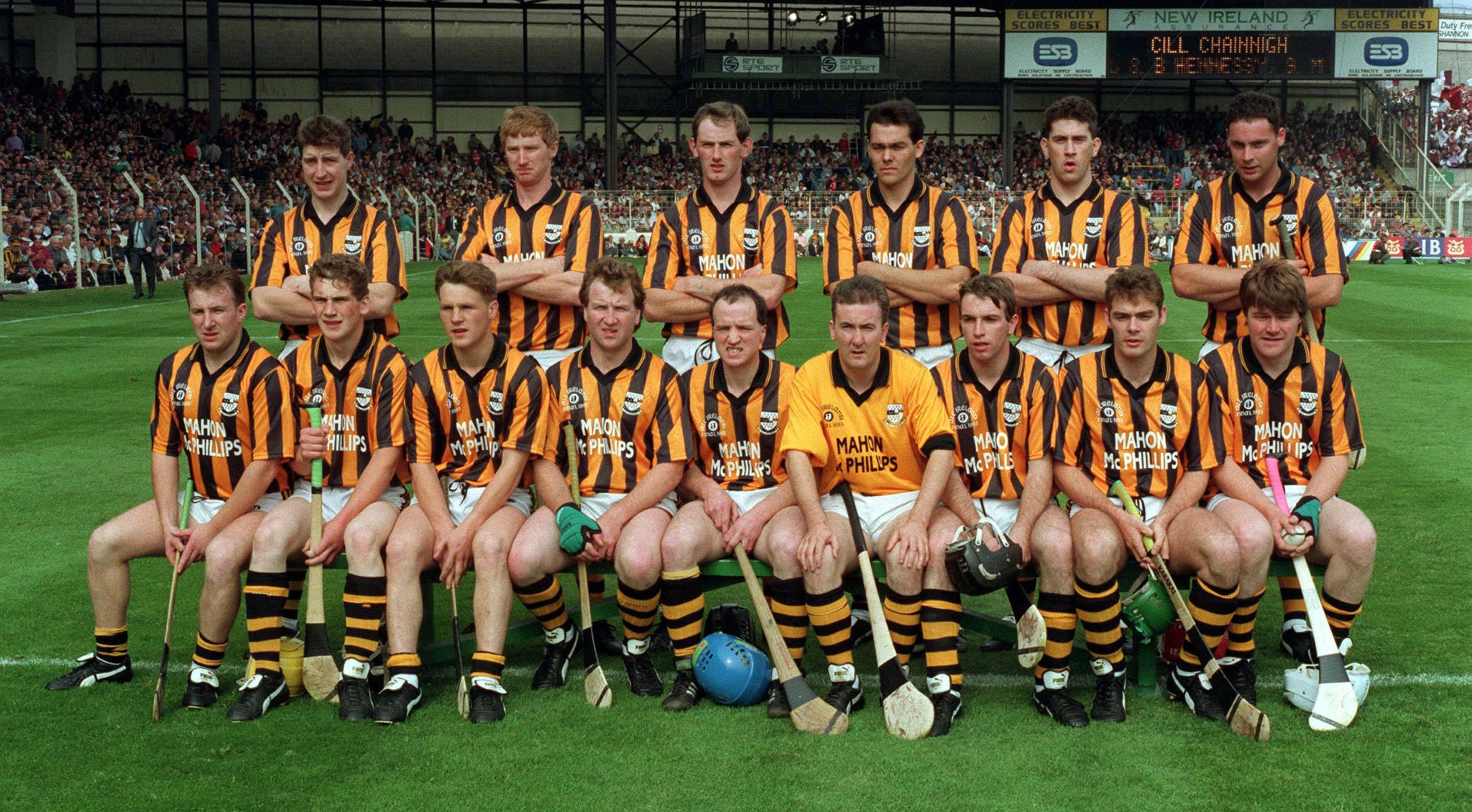 5 September 1993; The Kilkenny team before the All-Ireland Final against Galway. P.J. Delaney sits third from the left in the front row | Sportsfile

As P.J. focused on his recovery, Brian Cody led Kilkenny to the first of 11 All-Ireland wins in 2000.

Talk about his father Pat and the four medals he won, or his cousin J.J. with an incredible nine, and it is natural to wonder what a 26-year-old P.J. Delaney could still have offered his county.

With the one All-Ireland senior medal he did win stashed away in a sock drawer out of sight, however, he is no worse off for not knowing.

Across the months and years that followed, he demonstrated a hardy determination that would have fit Cody’s model. Self-destructive, almost, it was the way P.J. knew how to get by.

Back working part-time four months after brain surgery, he even attempted to pick up where he had left off studying for his accountancy exams.

“They were too much for me,” he admits now, running before he could walk a tempting cliché if P.J. were not indeed running again not long after relearning how to walk.

“I jumped back into everything as much as I could. As a sportsperson, I just wanted to challenge myself.”

I would love to have been the oul' lad in the forwards with the club putting on the bit of weight but being the one they looked to. I didn't get the chance to be that, to bring new lads through.

He was tempted once back into hurling.

“I knew if I didn’t that I would regret it,” he explains, a few minutes in a club game for Fenians the setting for his comeback.

“I played beside an old friend of mine, Billy Purcell from Johnstown, and he kind of looked after me in the match. He passed me a ball at one stage. I got a shot off, but the ball barely got in over the bar. I just said, ‘That’s enough for me now.’

“I just didn’t have the same vigour or bravery for it, you know. My head was still tender and the thought of going in and taking a bang to it, I was just trying to look after myself really.”

What is lost in a brain injury like P.J.’s can never be fully redeemed. Balance remains an issue, and the odd headache here or there. All told though, he knows how lucky he has been.

Important as hurling had been to him in his playing days, he was never his sole obsession in life.

“I gave all my jerseys away to people,” he remarks, a habit that started while he was still playing. “It always felt like the right thing to do.

“When kids got a Kilkenny jersey from a player, sure it was like winning the lotto. People still ask me why I gave it all away, but I got more enjoyment out of seeing their reaction when they got the jersey.

“My daughter now is playing a bit of camogie and she is always after me to show her my medal. I haven’t got them on stand or anything, but it is on my to-do list.”

“There is a crack, a crack in everything / That's how the light gets in”

“After a head injury,” P.J. explains gently, “you don’t come out the same person that you were beforehand.”

It is less a qualitative remark than a statement of fact, really.

Although he remembers nothing of what happened to him, the physical traces provide an inkling of the event that cannot be overlooked.

"I owe an awful lot to the incredible support I recevied during my recovery, particularly among people from Johnstown and my club Fenians."

The trauma of a brain injury can manifest itself in any number of ways and people less fortunate have become lesser for what they have lost. Throughout it all, his wife Sarah and his family have played pivotal roles in helping P.J. come back most of the way.

‘Half-full, or half-empty,’ P.J. Delaney chooses to see the bright side. Against all odds, he is still here and still smiling.

P.J. Delaney is Chairperson of Ogonnelloe Hurling Club in Co. Clare and they are trying to raise funds for a 40x20m indoor AstroTurf facility that will be used by Ogonnelloe, Scariff/Ogonnelloe Camogie club and the local Primary School.

To help out the clubs and be in with a chance of winning an Eco Garden Room plus €5,000 cash, you can buy a ticket right here.

Joe Canning: 'People want to retire me, I'll leave that for another day'