With Limerick vs Cork set to take centre-stage in the Munster Senior Hurling Championship this we...

With Limerick vs Cork set to take centre-stage in the Munster Senior Hurling Championship this weekend, Michael Verney outlined why he believes the reigning All-Ireland champions might be in a spot of bother come Sunday.

The one county sitting out the first weekend of action in the Munster Championship, John Kiely's Limerick will commence their All-Ireland defence against Cork this Sunday.

Comprehensively beaten by Tipperary in Páirc Uí Chaoimh last weekend, John Meyler's side will be desperate to record a first win at the second time of asking.

With many tipping Limerick to retain their All-Ireland crown this year, journalist Michael Verney believes an altogether more threatening Cork will turn up at the Gaelic Grounds.

"People are very quick to write-off Cork," Verney commented on Friday's OTB AM.

"They performed like it was an exhibition game against Tipperary and just didn't lay a glove on their defenders.

"The game I'll go back to though is the league game of Limerick vs Cork.

"Cork were having a disastrous league, pasted by Tipperary the week before, and they just came in and rocked Limerick at the Gaelic Grounds."

They're the one team over the last two years that we've seen that can beat Limerick and be really, really competitive 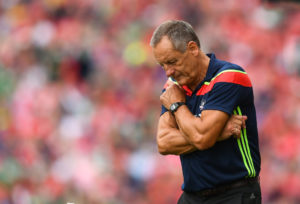 In the mix to win their third successive Munster Championship, Cork were pipped to an All-Ireland final spot by Limerick last year.

Holding a somewhat comfortable lead as the game moved into it's final minutes, Cork were overcome by a fitter Limerick side in extra-time.

However, Michael Verney remains adamant that they will not roll over despite their poor start to 2019.

"They're the one team over the last two years that we've seen that can beat Limerick and be really, really competitive," he said.

"On recent form, they are the one team that can beat Limerick and I wouldn't be writing them off."

Citing the importance of keeping their key players fit and matching Limerick's expected intensity, Verney believes they have to deliver "a massive bounce" on last weekend's poor showing.