"Does it have to end?" | Lyng considers Brian Cody's eternal secret

Since taking charge of Kilkenny's senior hurling team in late 1998, Brian Cody has never been on the kind of win-less run that Limerick compounded with their All-Ireland success in 2018.

A testament to his success that Kilkenny have ended the year as All-Ireland winners more often than not throughout his tenure, Diarmuid Lyng, a frequent opponent of Cody's sides when hurling with Wexford, has been sharing his insight into the James Stephens man's durability.

"Players wise, if you were to compare Kilkenny to Tipperary, particularly after Sunday," Lyng outlined on Wednesday's OTB AM, "it seems like they're way off.

"But I remember doing a talk with Brian Cody down in Wexford and I felt privileged just to be on a stage with him.

"Jim Bolger was there too, a good Wexford man, and he said to Brian, 'Your time is coming to an end now,' kind of delighting in it saying that 'it has to come to an end.'

What Brian Cody has instilled, more than anything else, is that if you have your spirit right everything else will take care of itself 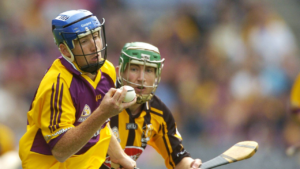 Recalling his initial impressions of Cody when he was representing Wexford, Lyng was not always enamoured by the Kilkenny manager.

"When I played I had no time for Brian Cody at all," Lyng admits, "I felt he was boring, always talking about these really simple things, and I just thought there must be some magic behind all this.

"I didn't really understand the word until I could look back in a bit, and that doesn't really have to come to an end.

"Religions obviously use the idea of eternal spirit for a reason, and if you have a certain spirit and you can maintain it, performances can rise and fall, but when you see Kilkenny, they never perform below 85 or 90% of what their capability is.

"What Brian Cody has instilled, more than anything else, is that if you have your spirit right everything else will take care of itself."