Professor Paul Rouse dropped into Off The Ball on Tuesday where he spoke about the imminent anniv...

Professor Paul Rouse dropped into Off The Ball on Tuesday where he spoke about the imminent anniversary of 'The Ban' being lifted in the GAA.

April tenth will be fifty years since the controversial lifting of Rule 27, or 'The Ban' as it is commonly known, in Gaelic Games.

The Ban had incredible reach, many victims including Ireland's first president Douglas Hyde, while Liam Brady was expelled from his Christian Brothers School for captaining the Irish under fifteen side.

"It is an extraordinary story which wraps Irish sporting history around Irish history in general," according to Rouse.

"It was played out at the very highest level of government with Douglas Hyde and at the very lowest, most local level of Irish sport, the intimate club games played across Ireland for many decades." 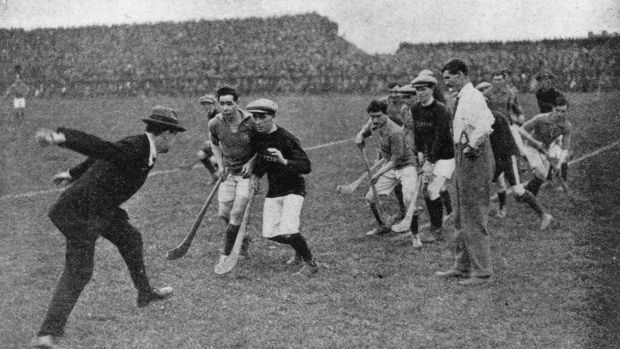 Those who broke Rule 27 were derided with terms such as 'West Brit or 'Orange Catholic.' those terms were not just pub slurs either.

"At official level, it [the language] was brutal," the UCD professor said.

"It was relentless and it was really clear the idea that Pat Fanning [GAA President who lifted the ban] spoke about in 1971 about the GAA being more than a 'mere sporting organisation.'

"It is a profound use of the word 'mere,'" according to Rouse. In the early 20th century, the GAA saw itself as so much more, and their intentions were clear.

"In 1901 the GAA passed a motion that said its purpose is 'to crush English pastimes.' It also  used the word 'struggle.'

"Its ambition was to indulge and engage in a patriotic effort to make young men more thoroughly Irish and self-respecting.

"It is all men, by the way, the Camogie association had yet to be formed. This is an idea that Irish manhood would be turned into the footsoldiers of the revolution, according to this cadre of officials who repeatedly castigate soccer, rugby, and cricket."

The rule, following the partition of Ireland, became a topic of discussion even if its removal was still almost 50 years away. The idealogy of those who supported 'the Ban' ensured it remained.

"After the signing of the Anglo-Irish Treaty and the partition of Ireland into two states, there is a debate. People were saying 'this rule has served its purpose,' Rouse said.

"It was built for a situation where there was no independent Irish state [...] It is time to get rid of this rule, it is time to move on.'

"But for some people, the revolution was only starting. They did not seek Irish independence just so they could paint the post boxes green and put the harp on top. of things.

"In this new world, there was not to be a place for the 'games of the Gabhal."

This stance led to the appointment of 'vigilance officers nationwide to double down on the rule rather than remove it.

The road was a long one but ultimately led to GAA President Pat Fanning making a speech at the first congress held in Belfast in 1971 where Rule 27 was abolished, even if it continued to effectively exist for many years afterwards.