In a year where he won his first major championship, golfer Shane Lowry revisited his Open triumph in conversation with Off the Ball's John Duggan.

The first such championship to be held on the island of Ireland since 1951, Lowry's success at Royal Portrush sparked jubilation among Irish sports fans.

An adored figure in Irish sport, Lowry, sitting down with Off the Ball's John Duggan, explained how in the process of securing this monumental win he got a first-hand look of what it means to be 'in the zone'.

"It was one of those days where I was very anxious before I went out," admitted Lowry of his penultimate round, "I think my tee-time was about 3:40 pm and I just wanted to get out there and put myself in the best position for Sunday.

"I knew I was playing well and I got off to a nice start and just kept going. It was that finish on Saturday though that won it for me.

"What happened on Sunday happened, but Saturday was one of the most incredible things that ever happened."

Ruthlessly efficient, Shane Lowry finished the round eight-under-par to build what would be an unassailable lead.

"I wasn't trying to mentally block everything out," he explained of his approach. "I was taking it all in but very focused on what I was doing.

"I was in the zone and, like, I've never been there before. I don't know [what the zone is], but if I did I would have bottled it that evening.

"I just felt like I was going to birdie every hole - it is an incredible place to be in."

I really felt that with the Open that because Rory, Darren and Graeme were from up there and it was their home course, I could go in under the radar 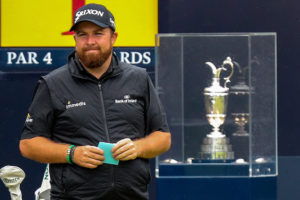 Whereas the surroundings of Royal Portrush made for the perfect story upon Shane Lowry's triumph, the Offaly native had some cause for concern in the build-up to an event hosted in his native island.

"I've struggled over the years with the Irish Open," he explained, "going in and trying to play too hard.

"But I really felt that with the Open, even though it was in Ireland, I felt that because Rory [McIlory], Darren [Clarke] and Graeme [McDowell] were from up there and it was their home course, I could go in under the radar.

"I'd said that if I could find myself there or thereabouts on Saturday evening, I'd be happy and give it a go from there.

"From Friday onward I was far from being under the radar, though, so I went out, did what I had to do and it was incredible."

You can listen back to John Duggan's full interview with Open champion Shane Lowry here.

WATCH: WWE wants rugby players | We meet a wrestler who made the switch