For the third time since 2014, an Irishman will captain Europe. Harrington has the honour of doing so next year in Wisconsin as Europe look to defend their crown.

As the news sinks in, one of his illustrious Irish predecessors, Paul McGinley, joined Joe Molloy on Off The Ball.

"That's his goal. That's what he wants to be - to go out and put a cherry on top to what's been an incredible career with a win as a Ryder Cup captain.

"Particularly, as he said in the press conference, away from home. It's a lot more difficult."

McGinley added that Harrington is taking the role at the right time in his career.

"It's a good moment in Padraig's career to be taking on such a big role," he said.

The one issue McGinley sees for incoming European captains is the growing expectation. 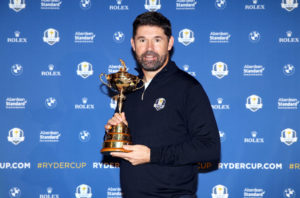 "The biggest problem he's got taking on is the expectation," said the Dubliner.

"[With] this hugely dominant period of success that Europe have been having. He's in a position now where he has to try and continue that and that's the problem. That's the big weight that I had on my shoulders. We'd won seven of the previous nine and I was going in as the home captain, with a lot of pressure on my shoulders.

"But Padraig will figure a way around all of these things. And the fact he's playing away from home I think is certainly going to benefit him. It's a role he's really going to relish."

The European captain doesn't have a say on the away golf course. But McGinley feels that "if there's one US golf course" that will suit Europe, it will be Whistling Straits. And fortunately, that's the location for 2020!

Meanwhile, Joe also got McGinley's thoughts on Rory McIlroy with the latter uncertain to participate at the Irish Open 2019. He is set to play just two European events this year.

"I think he should play the Irish Open though!" 🏌️

How would you feel if Rory McIlroy chooses to miss this year's tournament? #OTB

"It will all be fine in terms of what Rory has said," said McGinley on whether it affects McIlroy's Ryder Cup involvement in 2020.

"I'm sure Padraig will cross that bridge and communicate with Rory and be very much honest. You don't want to leave a player of the quality of Rory McIlroy out of the Ryder Cup team."

He also feels that the PGA Tour "is the place to be" for the elite golfers.

But on the Irish Open, he added: "We still hope that Rory remembers home and does come. He's got a huge fanbase here. It's where he's from and we hope that as the season goes on, we'll see how it all evolves and certainly we're keeping a little eye open on that. Hopefully, the Irish Open he's going to turn up there.

"The ball is very much in Rory's court and he'll make his own decisions and that's what the top players have always historically done."

He added that McIlroy hasn't given any indication yet as to his intentions. And he confirmed, "It's all up in the air" in regards to Lahinch.

"The door is always open for him. I understand at this moment in time, more than anything, his focus has to be on the Masters," he said.

You can listen to the full chat here.

Amateur champ Sugrue grouped with Westwood and Watson at US Open

McDowell the latest player to pull of out Irish Open