A pair of golfing giants – Rory McIlroy and Tiger Woods – have both stumbled through their Open Championship first rounds. But both have struggled for very different reasons.

McIlroy struggled to a 79 on Thursday with his nerves; the weight of playing on home soil as one of the world’s best golfers who should be at the peak of his career weighing heavy.

In contrast, Woods shot to a 78 due to his physical limitations.

Woods admitted after his extremely disappointing first round that he was in physical pain throughout, inhibiting his ability to play certain shots.

It is hard to fathom that Thursday's first round golfer was the same one who dramatically captured the Master's in Augusta only three months ago. However, during Thursday's warm-up, Woods did not look ready to compete, that's according to our own Joe Molloy in Portrush, who was speaking to OTB AM on Friday.

Standing within 15 foot of Woods as he went through his warm-up with his caddy, Joe LaCava, and one of his coaches, Molloy watched as Woods visibly battled with his swing in the 20 minutes prior to teeing off. 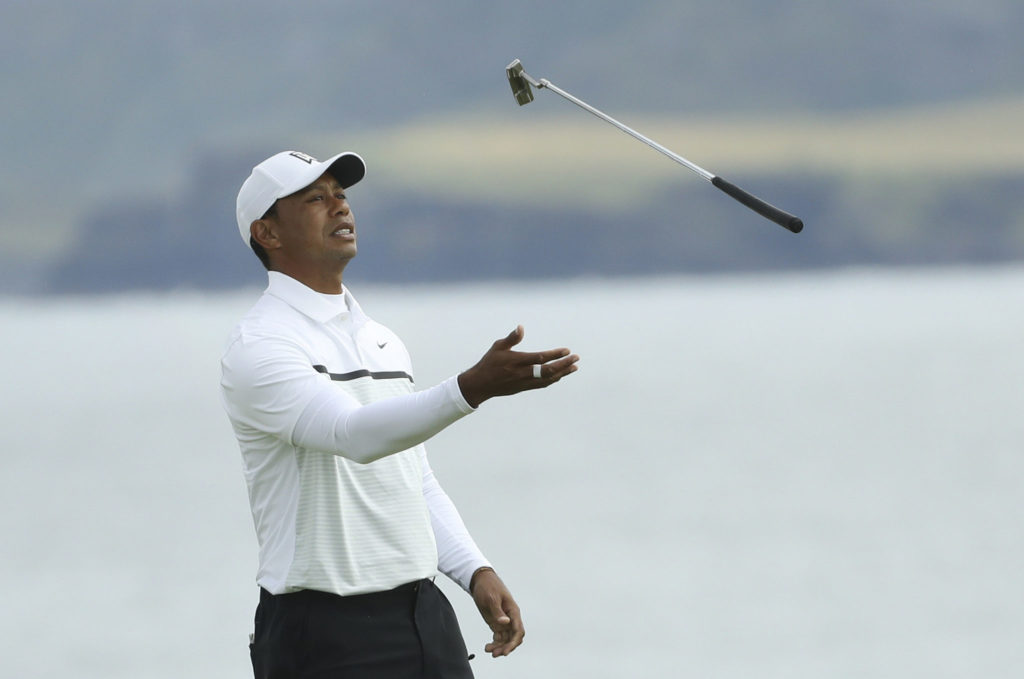 Tiger Woods of the United States throws his club in the air con the 5th green during the second round of the British Open Golf Championships at Royal Portrush in Northern Ireland, Friday, July 19, 2019.(AP Photo/Peter Morrison)

“I could have told you before the round that it wasn't going to go well and it was really sad to see it,” Molloy recounted on Friday.

“So he goes through his warm-up and he starts with the wedges – and grand. The irons then, they looked… okay.”

“Then he took a fairway metal and he topped it, no exaggeration, five or six times.”

“He was trying to hit this high cut with the fairway metal and he must have just – like, 100 yards low, along the ground to the left.

“And the gallery were watching and they were just like: ‘ugh’.

"And it was about ten to three (2.50pm) and he was teeing off at ten past three (3.10pm). And you are pretty close so you can kind of hear – and you're not eavesdropping, he knows people can hear – and he turns around to his coach and Joe LaCava and he sort of says: ‘what do you think?’

"This is ten minutes before you're about to tee off at the Open. And his coach kind of stepped in and gave him something then and he hit one or two okay ones after that", said Molloy.

“And they hop in the buggy and they are still in deep conversation but you can hear his arrival at the first and the crowd are giving him this huge welcome and you have this amazing moment where I'm thinking, 'He knows. He's got this weird thing where he has to wave to the crowd but he knows he doesn't have it and he duly didn't.'"

While for some players it was nerves, and others the difficulty of links golf on the Northern Irish coast, with Woods, Molloy said, it was solely a man battling with his body and his game.

"It looks increasingly like the Master's was the high point. That was it.

"If you were a Tiger fan, you got that big bash and that's it. It's hard to imagine him now doing anything else,” Molloy said.