After it was reported that his selection policy had upset some of Wexford's Gaelic footballers, Paul Galvin explained on Tuesday's OTB AM why certain departing players had made excessive noise of a situation that didn't warrant it.

Paul Galvin could think of better ways that he may spend his time as an inter-county manager.

After the excitement that surrounded his appointment by the Wexford footballers, the Kerry native was drawn into reports by the Irish Independent that he faced the possibility of a player backlash regarding a number of his early decisions on player selection.

The alleged target of criticism after he decided to part with the long-serving Daithí Waters and Michael Furlong, it is believed that both Kevin O'Grady and Tiernan Rossiter opted out of Wexford contention for the foreseeable future as a show of solidarity with those who were cast aside.

"I made decisions on a couple of players," clarified Paul Galvin on Tuesday's OTB AM, "a couple of other players then decided to leave and it created a bit of a ruckus down there.

"I thought it cast a bit of a poor reflection on everybody involved which was disappointing with all the work we've been doing."

Paul Gavin's first role in inter-county management, it took the former Footballer of the Year by surprise that such interest would manifest itself in the dealings of a Gaelic football team mired in Division 4 of the National Football League.

"I have been a little surprised," he admitted, "and maybe I shouldn't have been.

"The instant attention and the reporting on it was disappointing from the point of view that there was a group there doing lots of good work, lots of guys really keen to get into the squad.

"There are guys putting their hands up from various clubs or their managers saying, 'Will you have a look?' It becomes then about two guys who didn't want to be there and their attitudes told me as much anyway.

"It's not my plan to close doors [but] the team needed a shake-up, I felt.

"I've looked at years of footage. People probably think I came down and made rash decisions but I really didn't. I based my decisions on years of games and the training I was seeing in front of my eyes."

My gut was telling me about one or two of the guys who left and I didn't follow my gut on that but eventually the guys pushed the button themselves. 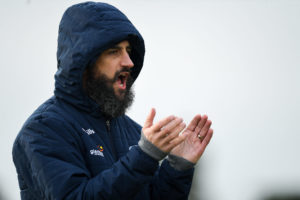 Without much time to go before Wexford's league campaign gets underway against Antrim in late January, the county's form in the O'Byrne Cup has not amounted to much in terms of positive results.

Nevertheless, Paul Galvin remains insistent that the task put before him will not be solved overnight and in the closely-watched restructuring of his side, he is attempting to build a team that will ideally hit its stride in time for the competitive fixtures.

"Some of these things were out of my hands," he remarked of certain initial difficulties. "Two players departed of their own accord who were, what you might call, on the fringes of things really.

"I made decisions on two players that had been there for a while, that I respected, that I had honest conversations with. Really, I never closed the door as such on those players.

"[The other] two guys left by the back door and I had heard about it before they actually told me about it which was a disappointment.

"My ears and my gut are what I have to go on - and lots of video as well. My gut was telling me about one or two of the guys who left and I didn't follow my gut on that but eventually the guys pushed the button themselves.

"They made it difficult for everybody. I didn't close doors, but their actions and the noise around it probably closed doors in a manner that would be difficult to open them again."

After making the trip to face Antrim on January 26th, Paul Galvin's Wexford will play their first home game the following Saturday against Carlow.