Recently retired Dublin footballer Paddy Andrews joined us on Friday's OTB AM to reflect on a t...

Recently retired Dublin footballer Paddy Andrews joined us on Friday's OTB AM to reflect on a truly remarkable inter-county career in blue.

Sifting through some of the highlights - and lowlights too - since he made the breakthrough in 2008, the seven-time All-Ireland winner set about identifying his most memorable game in a Dublin jersey.

Despite playing and scoring in a number of triumphant finals, Andrews cast his mind back to a game where he believes Dublin delivered something approaching a perfect performance.

Before Dean Rock scored the decisive free-kick in the 2017 All-Ireland final against Mayo, there came Dublin's semi-final clash with Tyrone. The Ulster champions who had defeated all comers quite comfortably to that point, Andrews recalled the sense of urgency within Dublin's camp.

"We hadn't played Tyrone in a few years," Andrews said on Friday's OTB AM, Mickey Harte's side having spent 2016 in Division 2 of the National Football League. "They were flying it, had won Ulster and they had this game plan that was going to beat Dublin."

After easing beyond Monaghan in the All-Ireland quarter-final, Dublin had a three-week build-up to the semi-final clash with Tyrone.

"We weren't exactly nervous," he explained, "but there was a sense of the unknown playing against Tyrone.

"They had this defensive style of play and we had obviously struggled with that playing against Donegal a couple of years previous and we just didn't know what to expect, really.

"But the preparation we put in for that game was off the charts." 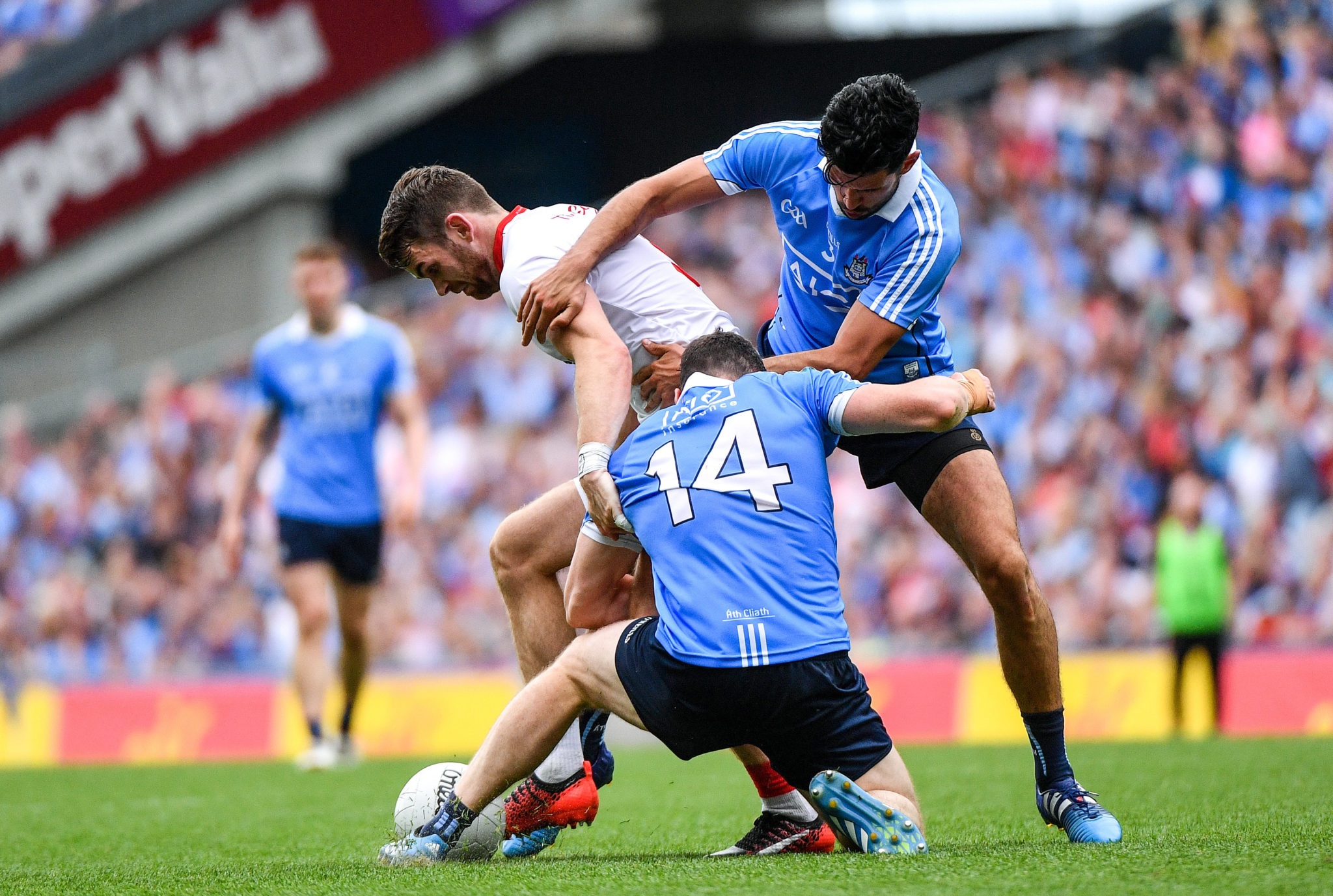 Ronan McNamee of Tyrone in action against Paddy Andrews and Cian O'Sullivan. Photo by Sportsfile

Widely touted as a game that could cause the three-in-a-row chasing Dublin a serious issue, Gavin's team went some toward dismissing such concerns when Con O'Callaghan scored a wonderful goal within five minutes of the throw-in.

"You know, when you do all of that preparation and it just clicks," Andrews explained, "we ended up winning the game by 13 or 14 points.

"Tyrone were a really good team but we just absolutely shut them down and everything we prepared for came off.

"I remember just the sense of satisfaction after that game, it was probably one of our best performances during the Jim Gavin era - and I played well enough as well which always helps.

"That day was just the definition of our hard work and preparation." 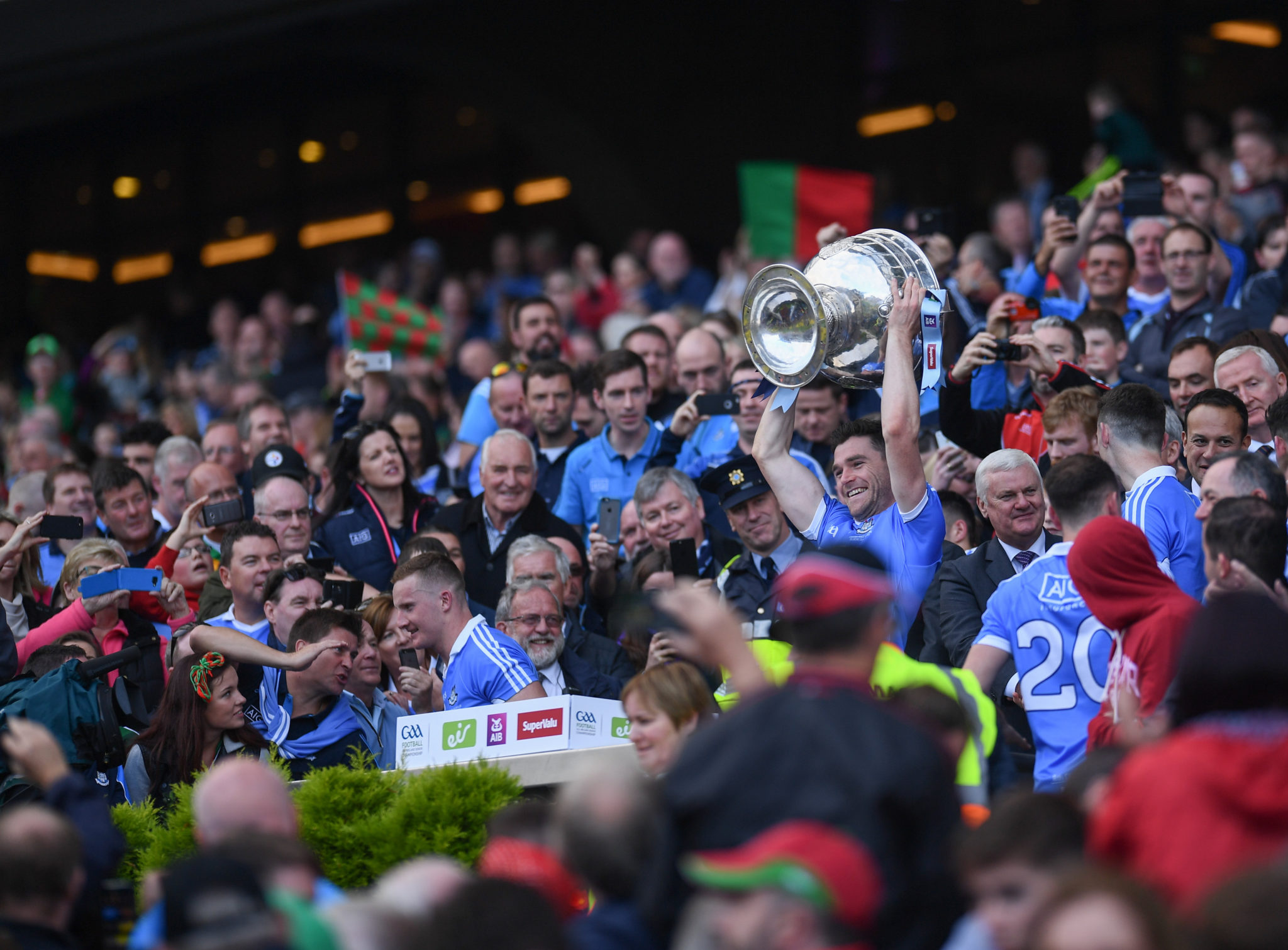 In a wide-ranging interview, the seven-time All-Ireland winner considered - among other things - a roasting from Colm Cooper, his dropping from the Dublin panel before the 2011 Final, and how he turned it all around to become a mainstay in perhaps the GAA's finest ever team.

Revealing something of the intensity required in terms of one's dedication and devotion to Dublin GAA if they were to keep pace with the demands put upon the county's players, you can watch the full interview back here.

Why Dessie Farrell's future looks brighter than some people think