AFL star and former Kerry minor Mark O'Connor insists that moving to Australia wasn't initially where he saw his future but says experiencing the lifestyle changed his mind about playing professional sport abroad.

Speaking to the Shot Clock with Kieran Donaghy on Thursday's OTB AM, O'Connor admitted the ability to continue his education was a big factor in pursuing a life Down Under.

"I knew I was coming out to Australia for trials and stuff but I didn't actually think I was going to stay here," he said.

"I remember watching Kerry and Dublin in the [All Ireland] semi-final and I was in the stands in 2016. I had a very frustrating year with my knees. I remember they lost, but that was where I saw my future at that time.

"When you're in a certain environment, that's where you see yourself. But when I came over here, I just loved the place. The lifestyle really appealed to me."

He continued: "I thought about all the things I could learn about and I knew I could study at the same time.

"It seemed like a great lifestyle - the best of both worlds. I could still stay studying, still play football full time and still have a bit of spare time on my hands.

"That was the most enticing thing for me." 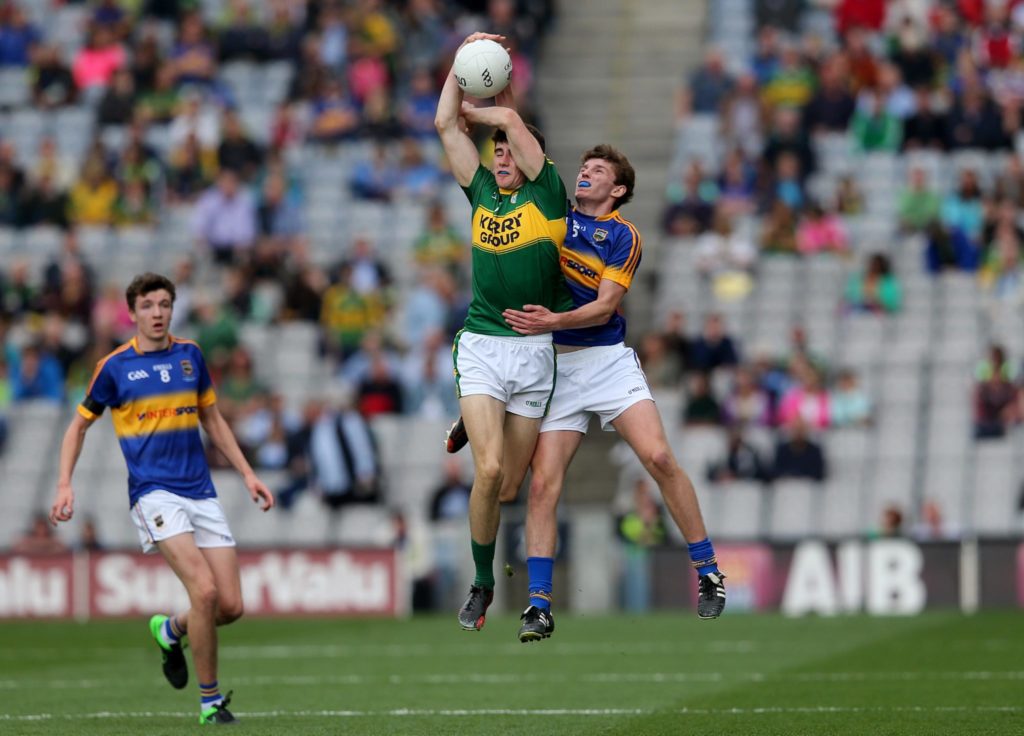 Kerry's Mark O'Connor and Danny Owens of Tipperary challenge for a high ball during the 2015 All Ireland Minor Final.

There has been concern voiced from different sections of the GAA community about Ireland's best young talent deciding to pursue the paid ranks in Australia.

Most notably Tadhg Kennelly's switch from Kerry GAA to the AFL in 2009 was seen by many as a loss Gaelic games in this country and the Kerry County Board have since made efforts to try and keep their young stars in the nation.

"I remember I had a conversation with Jack [O'Connor, minor manager], it was actually before the Australia thing came up and I went out. He told me he'd love me to stay and wondered if my knees would handle it - all of that stuff.

"I told him I didn't really have much interest in going out to Australia. He was happy enough, but when I got back from Oz [on trials] I was hell bent on going back.

"In terms of the county board making an effort, I don't actually remember anything. I could be wrong there. But I certainly don't remember any measures in place. I don't think there was, to be honest."

O'Connor then added that he was since made aware of an effort by the board to show him that there was, in fact, a future for him in Kerry and career paths within the county.

"I saw the brochure and I was very happy with that idea because people were lamenting the likes of Tadhg Kennelly and that [AFL teams] were giving the chance for young fellas to come out [to Australia].

"It was more giving out about Australia rather than maybe looking at the situation that was there and trying to improve that.

"It was something put in place to make it more enticing to play at home and I thought that was a very good idea and a good initiative.

"For something like that to go ahead, it shows they're thinking about player welfare and trying to give players better opportunities.

"Giving them a better lifestyle. I thought it was great."