Mayo edged Galway by a single point to be crowned Connacht champions, winning 0-14 to 0-13.

Moran admitted that the final minutes were very tense for him up in the commentary box.

“It was getting tight at the end,” Moran said. “You could see that the wind was picking up.

“Mayo was just keeping two or three points up all the way through that second half, but all of a sudden it came back.

“When we were three points [ahead], there was a massive part where we could have gone four [ahead].

“Eoghan McLaughlin went for a goal, [Bernard] Power made a great save to tip it around the posts and we missed the resulting 45.”

That missed opportunity almost cost Mayo, as it led to a two-point swing, and brought Galway back to within two points.

“They came up the pitch, Shane Walsh scored a whirly of a point and then all of a sudden it is back to two,” Moran said. “You knew then it was going to come down to the last few minutes.”

There was heightened drama near the end of the match, with two points still the difference, as Sean Kelly was taken down just outside the square, resulting in no penalty.

“We still haven’t seen the replay of the penalty incident, but it did look outside from where we were sitting in the press box,” Moran said.

“That is the finer margins there is. If a penalty is given there, Shane Walsh against David Clarke, who knows how it could have finished up?

“We could be looking at a very different result here today.” 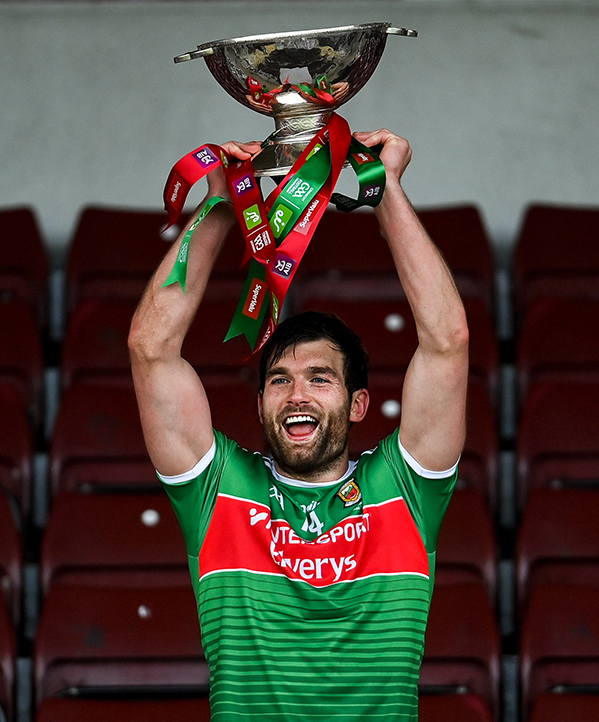 The match itself was reflective of the scoreline, as Moran saw the battle that it was on the pitch.

“It was a dogfight with little flashes of brilliance in it,” Moran said.

Moran believed that there were few excellent performances, but that Matthew Ruane was the difference-maker for the Mayo side.

“You are looking at Matty, because of the ball he turns over for Cillian [O’Connor’s] free, the drive through he does at the start of the second half and punts one over the bar; brilliant play.”

Ultimately, though, Moran suggested that substitute Brian Walsh’s contributions off the bench truly won the game for Mayo.

“Getting two scores, assisting another one, all of a sudden that’s three scores out of your total of five in the second half,” Moran said. “That is a massive return for a sub coming on.

“We had seen last night in the hurling, and we have seen it here today, subs coming on can make all the difference in these little tight games.”

Although it was an exciting and close battle, Moran does not believe it will rank as a truly great classic Connacht final.

“We are in November, we are in the middle of winter, there is no crowd here; it was a decent game, a good competitive game for the situation we are in,” Moran said.

“Mayo will be very happy tonight going home with the result.”

'I can go for a pint with no-one staring!' | Andy Moran & Johnny Doyle on club careers