Thus far, some of the new Gaelic football rules have not been met with universal approval.

The changes have been trialed in pre-season and the National Leagues are about to start.

But the GAA Central Council will first meet this Saturday to decide whether they'll trial the new rule changes in the league.

We got the opinion of current inter-county managers and what they hope to see happen.

Donegal's Declan Bonner and Turlough O'Brien of Carlow joined us on Off The Ball.

The hand-pass rule in particular is not to Bonner's liking.

"It doesn't work. It's basically penalising the team in possession," he said.

"I had serious reservations before I actually saw it in action. We've played four matches now and it's slowing the game down. There's a fluent move going and all of a sudden, it's penalised.

"Referees are finding it very, very difficult even to pick up on it. I spoke to a number of referees after some of these games. They've a difficult enough job the way it is, without having to monitor this and they are missing it. There are frees being blown on the second and third hand pass. There are other referees where it sometimes goes into the fourth hand-pass. It's very difficult."

Bonner also predicts "mayhem" if the new rule ends up in the "white heat of Championship". 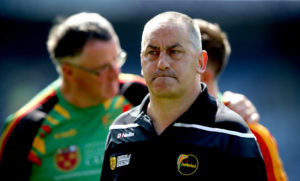 O'Brien added that "it's very restrictive" and that it hasn't improved the game "in any form". He also refuted suggestions that there has been consultation on the subject.

"People need to get around a table"

"First off, I want to refute the level of consultation that was involved. There was a survey sent out to us and we were asked to complete it," he said.

It's going to become a poorer game

"The rules were already proposed at that stage, you know, so I don't believe the consultation process was as robust as is claimed. You can't decide these things by sending out a survey to respond by email. That's not how you address this issue. People need to get around a table."

On the rules, he also feels, "it's going to become a poorer game because teams aren't going to give up possession. They're not going to kick the ball away."

Bonner also emphasised that "90% of players through the GPA didn't want the hand-pass rule".

"It's having a negative impact and it has to go," Bonner continued on the feedback from players on the hand-pass.

And he also said his team have not been training some of these rules in mind.

"We haven't really done a huge amount on it," said Bonner.

"I felt from the Day 1 that the hand-pass rule just wasn't workable."

In contrast, O'Brien's team have trained with the rules in mind.