Former Donegal footballer Luke Keaney should be entering the prime of his inter-county career. Instead, he had to retire at 24. He told Off the Ball his story.

In 2011, an 18-year-old Luke Keaney became an active member of Donegal's senior panel when he played in that year's Dr McKenna Cup.

Representing University College Dublin on a sporting scholarship, he also featured in the Leinster equivalent.

"Technically, you're not meant to do that," he admitted on Wednesday's OTB AM of his concurrent involvement in the O'Byrne Cup, "but because I was on a scholarship, I had to represent them."

Although he would not feature in Jim McGuinness' All-Ireland winning panel of 2012, this was indicative of a playing schedule that was only going to get more relentless for Luke Keaney.

Upon making a senior breakthrough into Donegal's regular panel in 2013, balancing the demands of college football with club loyalties, and a place in the county's U21s side, became more difficult still.

An unused substitute as McGuinness' side fell short in the 2014 final against Kerry, he cannot pinpoint the exact moment amid all this madness that he doubted his body's capabilities to deal with the strain.

"At that time," he noted of a week where his senior debut coincided with a U21 provincial final, "you were just following orders.

"I think I was marking Diarmuid Connolly [against Dublin in the league], a nice and easy job, in front of 14 or 15,000 after Donegal had just won the All-Ireland in '12.

"From the high of playing your first game to an Ulster final, and we actually came up short in that game, it was a tough few days.

"Looking back, [my body] wasn't good but I wasn't aware of what was being done and as athletes, we just try to push through it.

"There is no long-term view in the GAA. The wider picture, well, there is none - it goes to the back of people's minds."

By late 2016, with Donegal under the stewardship of Rory Gallagher, the 24-year-old, having recently returned from a work-related stint in Texas and time away from inter-county GAA, had cause to believe that he was on the cusp of cracking Gallagher's starting XV with a little luck.

A few weeks later, Luke Keaney was lying on a hospital bed in Coventry under the impression that the keyhole surgery which had been carried out on his hip would facilitate an eventual return to the Donegal panel.

He has scarcely kicked a ball since.

You're afraid to speak up, but you just want to train and play. I didn't know what was wrong, but when you're struggling to put on your socks in the morning, it is tough 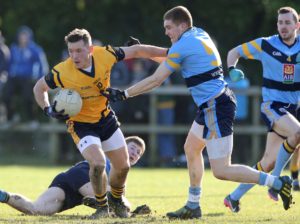 Unlike any number of athletes whose careers are cut short due to injury, Luke Keaney owed nothing of his retirement to bad luck.

Over the course of about four or five years, his body gradually degenerated under the strain of satisfying numerous commitments on both sides of the country.

"When I was in Dublin," he recalled of his three-year stint as a student in UCD, "I had to travel back [to Donegal] twice a week, during the week.

"That's a four-hour journey going back to Letterkenny or Convoy where we were training, and you're getting back to Bellfield at 2 am and have to be ready to go to a lecture the following morning.

"Hop in the car then again on a Friday evening for maybe two sessions over the weekend between inter-county training on a Saturday and maybe a club game on a Sunday.

"Some of the training sessions could have gone up to two hours. We were wearing GPS trackers and sometimes you might have hit 12 or 13 kilometres in a session.

"You're doing that on a Saturday and then playing a 60-minute game for your club on Sunday. You've no recovery during that."

After completing his undergraduate degree in 2013, Keaney, who had bought into Jim McGuinness' plans for Donegal in the year ahead, commenced his masters degree in Ulster University, Belfast.

Making the arduous journey across Ulster a few times a week became a regular feature of Keaney's life.

"We made a commitment that we were going to put our lives on hold to try and do everything to win an All-Ireland," he outlined of a year that would see Donegal fall short at the last hurdle.

"One of the things that really sticks out was the pre-season for 2014. We were doing double sessions that were maybe two hours long - physical training on Saturday and tactical on Sunday."

Combined with the training that was being done during the week, Keaney's weekend saw him driving from Belfast to his home in Donegal, before heading on to the county's training base in Dunfanaghy; the latter journey taking up his Saturday and Sunday before heading back to Belfast again.

"I'd be going back to Belfast and I wasn't fit to get out of the car by the time I got there," he admitted. "I was carrying my hip. It was painful walking.

"It's not that you're afraid to speak up, but you just want to train and play. I didn't know what was wrong, but when you're struggling to put on your socks in the morning, it is tough.

"But with anything in terms of pain, you just went with it. At that stage, when you're 22 or 23 in a panel, you're naive because you just want to impress.

"If you're not training, you're not in the manager's mind and you're not going to get game-time. As amateur athletes, we just don't have the luxury of resting."

I didn't even have a girlfriend, didn't know where my life would go and he was telling me to think long-term, about my quality of life at 70 and not ending up in a wheelchair 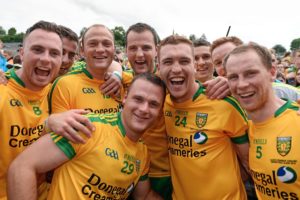 The most high-profile exertion of Keaney's week, this commitment to inter-county football had to be balanced alongside what was required of him by both club and college teams.

In the aftermath of 2014's disappointment, Keaney, who had finished his degree at UUJ, took up the opportunity to travel with work to the United States of America.

Allowing his body the opportunity to rest, upon returning in 2016 he was contacted by Rory Gallagher. The new Donegal manager was as keen for the Four Masters clubman to return as he was himself.

Determined that he needed to address the troubling pains that lingered, however, he gave Gallagher a firm commitment on the condition that he would have an MRI scan carried out on both hips.

In truth, it was the beginning of the end for Luke Keaney, the footballer.

"You're sitting there and he's showing you x-rays of your hip and you can see lumps and where the bone has become deformed," he recalled of seeing what years of playing football had done to his hips, "but I was still thinking I'd be fine."

The 'he' in question was Professor Damian Griffin, and Keaney's optimism was short-lived.

"After 20-minutes, he closed me up," he explained of a procedure whereby Griffin explored the inner-working of Keaney's hip in the hope of salvaging optimum usage. "The next day he comes in and sits down: 'Luke, it's bad news.' That was probably the hardest point.

"I didn't even have a girlfriend, didn't know where my life would go and he was telling me to think long-term, about my quality of life at 70 and not ending up in a wheelchair.

"I was only 24, and I'm still trying to get my head around it. My whole dream was shattered, my inter-county career was gone.

"I was Luke Keaney, the Donegal footballer, and that was gone. There was a lot of dark days."

Although he can now talk about it, the struggle is ongoing.

Undergoing five surgeries in the space of 18-months, it is Keaney's primary intention now that others do not succumb to his fate.

"The GAA as a whole has a duty of care to their players," he declared. "At the end of the day, if we're representing our club or county, the minimum you should expect is to be looked after, and in my case, that didn't happen until the GPA stepped in.

"When you're not useful, you're thrown away. The loneliest spot is on the sideline and if you're not training in the GAA, you're a nobody."

You can watch Luke Keaney tell his story to Off the Ball here.