A young GAA player has told OTB Sports about his experiences of going public as gay and the reception from his team and within the sport.

A young GAA player has told OTB Sports about his experiences of being an openly gay male in the sport.

Brian Fennell is a 20-year-old Gaelic footballer who plays wing-back for his local team Arklow Geraldines Ballymoney in Wicklow. He captained their Junior C team to the Wilson Buttle Cup last September.

In his first year at university, Brian said he felt comfortable opening up about his sexuality.

“It was December 2019, and it was after spending my first six months in college… so I suppose it was like starting again. When I was in college, if I met a new person I just came out straight away.”

After opening up at college, Brian then decided to tell his club teammates.

“There wasn’t really a moment that I came out to the team one-on-one as there are a good few of the team that I would hang around with all the time.”

“So when I came out to my friends they were just accepting of that and then I think it just went gradually round the table. I didn't want to make it a big deal at the time by telling the team all together. They just found out”.

“A few of the lads off the team after training or in the pub came over and congratulated me and said their piece and it was never really made into a big deal and I’m kind of glad it wasn’t.” 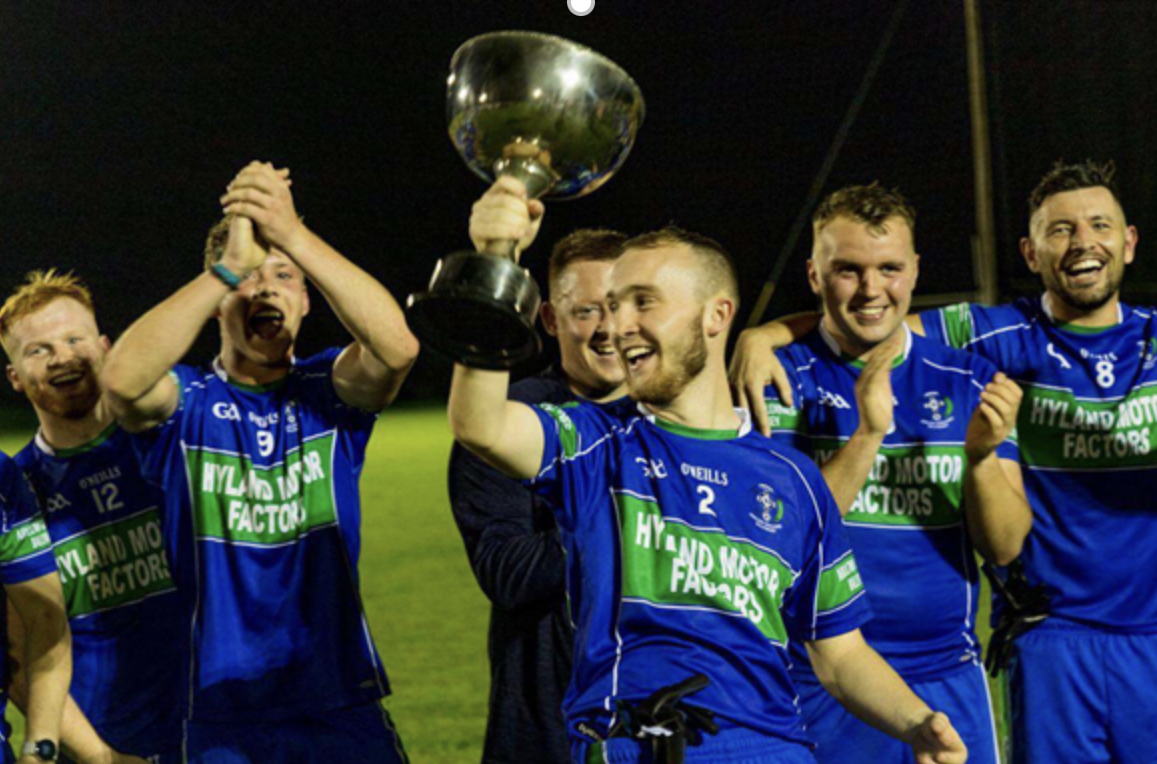 CREDIT: Brian Fennell (no.2) captaining Arklow Geraldines Ballymoney to the Wilson Buttle Cup, in September 2021. (photograph by The Wickow People)

On the pitch, Brian said he had not faced any discrimination as a gay man.

“I’ve never in my life had an incident (playing football) where my sexuality was brought up in a bad way. In clubs across the country there are many players from different cultural and ethnic backgrounds.”

“I can’t remember a time where any opposition has treated myself or my teammates badly based on our backgrounds. I’m not saying that this doesn’t happen, I’m just saying I haven’t been affected by it”.

“I think that the fact I haven’t had any incidents like this on the pitch shows how players have evolved and they're becoming more aware and accepting of a more diverse GAA”.

In October, UL Wolves became the first GAA team in the country to include the pride colours on their jersey. Brian admired the gesture given that his own twin brother, Ben, plays with the team.

“Knowing that my brother and his teammates will wear a jersey that promotes inclusivity makes me proud. When I first saw the jersey I really liked the idea. It was small and neat, but I thought it gave a really good message that UL supports the community. I think the GAA has done a lot to encourage LGBT inclusion, but could do more”.

“I remember in 2015 a match between Dublin and Tyrone, David Gough wanted to wear a rainbow wristband whilst refereeing but he was refused permission to wear it. It’s situations like that, where I wonder if the GAA are doing enough to promote inclusivity in the sport.”

In September, Brian moved to Charles University in Prague, Czech Republic on an Erasmus year from NUI Maynooth, studying History and Geography and joined their GAA team, Prague Hibernians.

Joining a new team meant that Brian was faced with coming out once again.

“I think it was just dropped in conversation whenever we were drinking. The women’s team here is very close to the men’s. We had nights out together and the girls would mention it to the lads. I had a 10-second conversation with some of the lads about it and that was it. I don't think there was really a need to talk about it more because it was more of an acknowledgement than telling them.”

While Brian was able to be open about his sexuality with his club, this is not the experience of every LGBTQ+ player in the association. Na Gaeil Aeracha, one of the newest clubs on the island, offers a safe space for these players.

Out of over 2,200 GAA clubs across all 32 counties, Na Gaeil Aeracha are Ireland’s first explicitly LGBTQ+ club, designed to be inclusive but open to anyone.

Founder and Chairperson Karl O’Seanain spoke to OTB Sports about how he started the team back in September 2020.

Vice Chairperson Emma Loo spoke about the difficulties that male players face compared to female players when it comes to their sexuality.

“I think maybe with ladies football, and camogie, it might be that people are more accepting and I think it really comes down to this pressure to be hyper-masculine in the GAA and I think that's why maybe some guys don't feel safe to come out.

"They might be judged and it might affect their career. There's so many factors that they have to consider, maybe that's why they don't feel comfortable”.

Jessica Fletcher is a member of Na Gaeil Aeracha’s women's team and she spoke to OTB Sports about the togetherness of the club.

“Coming into the club, it was like walking into a group of friends that you didn't know you had”.

“As a queer person myself, it's really great to have those supports in sport where maybe you felt different before. Having other people in the same situation as you that you can talk to as friends and as your teammate is really great”, Fletcher said.

Brian offered advice for those that find themselves in the same situation that he was in a few years ago.

“Don't come out until you’re ready and I wouldn't really get pressured into coming out. Just because you're gay doesn't mean you can't play football, don't fall to the stereotypes and just be who you want to be. Play what you want to play and don’t let anyone get in the way.”