GAA's mishandling of hurling a warning for football revolutionaries

People keep harking back to the Tommy Murphy Cup, and his poor old name has been dragged through the mud with this, but that competition was poorly thought out. If you do it properly, there’s no reason a tiered football championship wouldn’t go well.

No relation of the Laois midfielder who partners Kerry's Mick O'Connell in the GAA's Team of the Millennium, Tony Murphy can’t help but have some sympathy for his namesake, Tommy.

The only member of that millennial dream team never to have won an All-Ireland medal, it seemed fitting when his name was attached to a breakout competition that afforded weaker counties the chance of a meaningful day in Croke Park.

Gathering together the willing and able of the football championship's early dropouts, the Tommy Murphy Cup offered a basement entry for those counties who'd found the front and back doors locked.

Unquestionably lesser, it was to the GAA's credit that efforts were made to afford the Tommy Murphy Cup a veneer of seriousness; until, of course, that was no longer deemed necessary.

The curtain-raiser to an All-Ireland semi-final in '04, '05 and '06, by 2007 the Tommy Murphy Cup final was being played before an All-Ireland quarter-final double-header. One year later and it had been reduced to serving as a sideshow for a pair of Round 3 qualifiers in early August; fulfilment of GAA President Nicky Brennan's prophecy four-months before that football's tiered experiment was "dead in the water."

Eleven years have passed and 'Tommy Murphy' remains a byword for Gaelic football’s reluctance to redress it’s glaring inequalities. A near-fatal attempt at cultivating some sense of purpose for weaker counties, the competition's legacy has inspired little enthusiasm for further discussion on the matter.

Yet, as the stronger counties plough on largely unobstructed, and the weaker cling to their phony relevance, there is a growing realisation that Gaelic football's salvation lies beyond trivial rule changes and the fixtures calendar.

Once more, the prospect of a tiered competition looms.

While an assumed certainty exists that any future restructuring would not result in a Tommy Murphy Cup take two, hurling's conflicted existence suggests alternative issues may arise if Gaelic football similarly becomes a game of two haves. 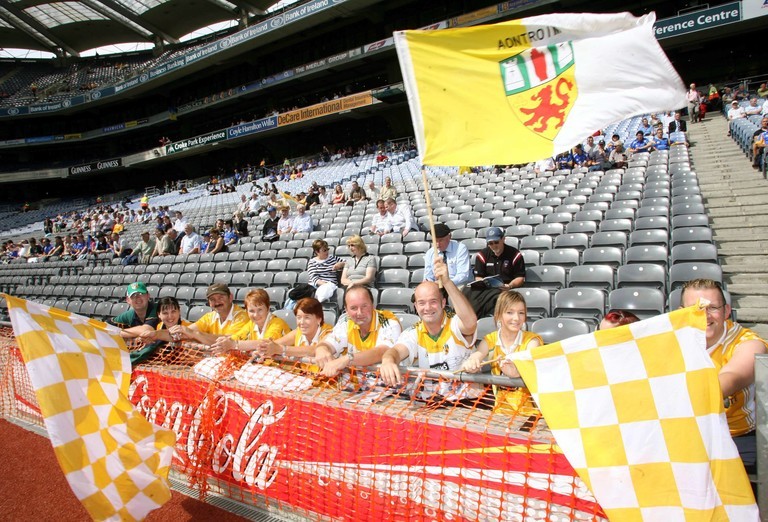 A modest gathering of Antrim fans at the final installment of the Tommy Murphy Cup. Picture credit: Sportsfile

Across his twelve-year sojourn with Kildare's hurlers, Tony Murphy was largely spared the ignominy of taking an annual shellacking from one of the so called stronger counties.

"I saw both sides of it," he explains of the days before a competent tiered structure divided hurling’s best from the rest.

"When I started with Kildare it was in the original Leinster format, and the All-Ireland 'B' championship then later on in the year. You'd play someone like Westmeath or Wicklow, and whether you won or lost that you'd be gone by the next round, more often than not.

"You'd take a break for a month or two, and the 'B' championship would kick-off."

Hurling's answer to the Tommy Murphy Cup, the 'B' championship was expunged shortly after Tony Murphy enjoyed success with Kildare in 2004. The senior hurling championship would now be divided along defined lines of capability; the Christy Ring Cup was born.

Relieving counties like Kildare of provincial commitments that only lead to a tiered competition anyway, this new initiative sought to pit such counties along these terms of engagement from the outset.

"Having experienced both," Murphy admits now, "there's no doubt that the tiered competition was the better way to go.

"Let's be honest, we weren't going to be winning the Leinster championship, let alone the All-Ireland. That wasn't because we weren't ambitious though, and when the Christy Ring Cup started we knew we could channel that ambition toward actually winning something.

"I don't necessarily see why some footballing counties feel they should be guaranteed a chance to compete for the Sam Maguire. Without wishing to insult them, why shouldn't they have to qualify to play at the elite level?

"I always thought as a Kildare hurler that I should have to earn my right to play for the Liam MacCarthy."

Understanding Kildare to be worlds apart from the elite counties, the chance of playing competitive hurling ultimately outweighed any desire to pursue the fantasy of challenging at the top table.

Therein lies the question that continues to temper enthusiasm for change within Gaelic football, and plagues hurling played beyond the Liam MacCarthy Cup: are you content to sacrifice coverage for being competitive?

Despite the best efforts of those outlining alternative tiered formats for the football championship, the assumption that interest in the lower reaches is a given may prove short-sighted. 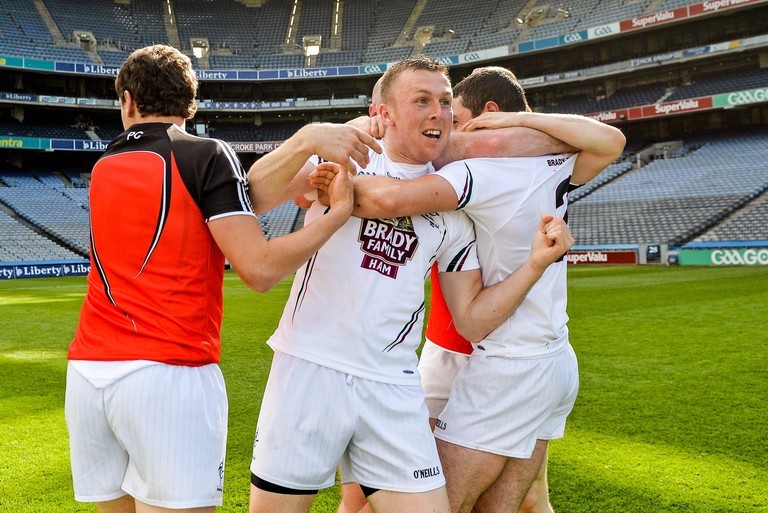 “Every football game will get some coverage this year,” states Tony Murphy with an admirably slight hint of bitterness.

So long as a Round 1 qualifier between two Division 4 teams falls under the umbrella of the senior football championship, it will be afforded a degree – however small – of televised recognition that most of the country’s hurling action is denied.

However remote its effect on the All-Ireland football series as a whole, while it remains a part of that whole it cannot be so readily ignored.

“I never picked up a hurl with Kildare to be on The Sunday Game,” Murphy admits, “but at the same time we should have gotten more coverage and were treated poorly.

"I've always thought that beyond the elite counties hurling has been treated very poorly, and the media coverage afforded to the lower tiers is pathetic.

“We hear all about hurling being the greatest game in the world and a national jewel, but it's barely promoted in this country.

"When I see this Fenway Classic over in Boston and that game out in Australia, that really gets me worked up. The GAA are talking about spreading the game internationally, but they won't even open their eyes and have a look at the national situation first!

"Personally, as long as the elite are kept happy, I think that's enough for the GAA."

While Gaelic football admittedly encompasses a broader church of followers, the ease with which even the Joe McDonagh Cup has been ignored should concern those weaker footballing counties fearful of their fate in a newly tiered terrain.

“The only thing they discuss about the Joe McDonagh Cup on The Sunday Game is Offaly’s latest defeat,” a bemused Murphy states of the RTÉ panelists' proclivity for acknowledging the Faithful County irrespective of how far they fall.

“Like, Carlow in the football have got great coverage in last couple of years, and they even had Turlough O’Brien on the show after they’d beaten Kildare last year. But I mean, Carlow hurling is doing more at the moment than the footballers and you hear little or nothing. ”

Winners of the inaugural Joe McDonagh Cup, Carlow’s prize of a place in this year’s Leinster championship has done little to stir interest in Colm Bonnar’s upstarts.

With their latest defeat to Dublin all but ensuring that Carlow will return to the Joe McDonagh Cup next year, they are the only county in this year's Leinster or Munster hurling championship that will not have had at least one of their games televised live on RTÉ or Sky Sports.

Even after securing their place among elite, hurling's interest in what remains traditional outweighs that which is inspirational. 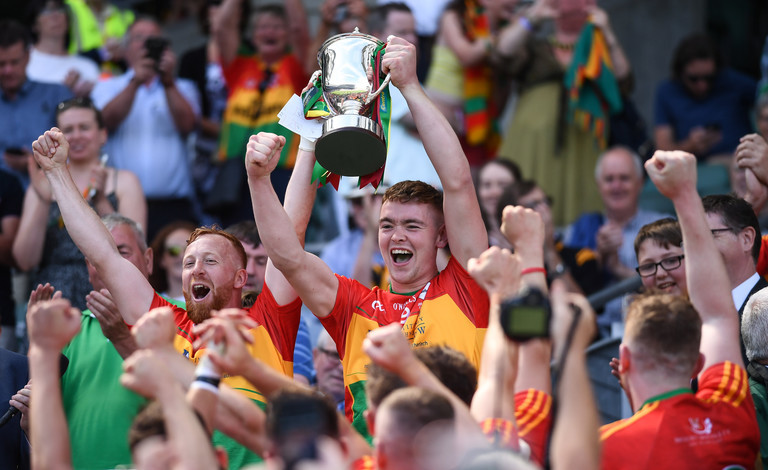 “If you look at the past and competitions like the Tommy Murphy Cup, they certainly were ‘B’ competitions. That’s how they were promoted and seen by everybody within the GAA, media and the players. If you have a proper tiered competition with promotion, relegation, All Stars, trips, extra funding and the correct promotion, there’s no reason why that wouldn’t work.”

Relaying his thoughts on a tiered competition to the Irish Examiner, Ciarán Deely’s vision for a secondary football tournament struck a chord with Tony Murphy. He understands the London manager's desire to be competitive.

Yet, experience has informed of the price you must pay.

“When the Christy Ring Cup started the final was played in Croke Park before an All-Ireland semi-final in August," he explains with a knowing nod toward the profile the Tommy Murphy Cup was initially afforded.

“All of a sudden then, a decision was made that that wasn’t going to  happen anymore and it was played off alongside the Nicky Rackard and Lory Meagher Cup finals in June.

“It was almost like a blitz and would be played out in front of really small crowds.

“While that wasn’t strictly the GAA’s fault, there was no profile given to it at all. The finals would get a one-minute summary piece on The Sunday Game that evening, with the analysts giving it a bit of lip-service.”

Unsatisfied with their lot, Murphy and his teammates made some inquiries as to why they were being mistreated in such a manner.

“Alongside other players from Kildare,” Murphy remembers, “we went to the Gaelic Players Association to try and see if we could get a little coverage for the Christy Ring Cup.

“The excuse we were given, officially or unofficially, was that there was no sponsor responsible for it.

“Without a sponsor to drive on the publicity it was the sole responsibility of the GAA, and they had their focus on the Liam MacCarthy.”

Once again, hurling's limited level of nationwide interest and participation is an issue that Gaelic football does not need to contend with, and may well explain why locating a sponsor for the nascent competition was particularly difficult.

Yet, as the GAA "moves more and more toward a corporate version of the game" in Diarmuid Lyng's words, it is intriguing that of the many commercial partners listed on the GAA’s website, no company has yet been found willing to promote hurling’s competitions beneath the senior championship.

With Bank of Ireland proud to sponsor the Celtic Challenge, John West taking care of the Féile, and Masita keeping an eye on the GAA’s Post-Primary School Championship, Bord Gáis Energy, Centra and Littlewoods Ireland retain interest in the upper echelons of the senior hurling championship, and nothing more.

Is it so inconceivable that a top tier Gaelic football competition would command commercial interest the like of which no lower tier could hope to replicate?

Would Eir, AIB or SuperValu concern themselves with Wicklow, Sligo or Leitrim if an elite competition made up of Dublin, Kerry, Galway, etc. represented an isolated market they could work with?

Those like Ciarán Deely who hope for a tiered football championship that takes the best of what is currently made available to all counties, while scarifying nothing more than the current on-field inequalities may be left disappointed.

As hurling's elite move ever closer to the exclusivity of a pseudo-Champions League that puts the best interests of the few over the many, why would the GAA approach the convenient segregation of Gaelic football any differently?

EXCLUSIVE: County Boards reveal if their teams have been training or not