As the GAA's introduce an advanced 'mark' rule into Gaelic football, former AFL player Marty Clarke has dismissed the notion that this change will influence the recruitment criteria for young Irish players.

As the general indignation surrounding an ill-conceived second tier to the senior football championship slumped closer toward resignation, a sharper focus came upon an additional rule change that made it through last weekend's Special Congress.

"Everyone talking about tier two and as big a step it is for the GAA," began Tomás Ó Sé from his Twitter account, "I think the introduction of the forward mark is an absolute disaster.

"No need whatsoever for it the way the game is changing and being played. A huge mistake I think."

A departure that will allow attacking players to opt for a free-kick should they catch a kicked pass cleanly in the opposition's 45, the prospect of the 'mark' has proved less divisive than the hastily planned 'Tier 2', however.

"I'm a fan of it," admitted Kieran Donaghy on Thursday's OTB AM. "Anything that promotes kicking the ball in quicker, earlier and sets up more 50-50 battles in around the scoring zone is a positive for me."

The kind of player that would have exerted an even greater influence had the rule been in place during his inter-county days with Kerry, Donaghy's approval came with a worrying caveat, however.  Given Tomás Ó Sé's previous comments on the same issue, one could surmise that his criticism of the rule was informed by the very bogeyman Donaghy foresees; Australian Football League recruiters.

"Are a lot of our young players who become very good at the 'mark' at underage level going to be picked up and poached by Australia," he asked in light of the importance this talent holds within the Australian game.

Would the development of this skill contribute to an enhanced level of interest in young Irish talent by professional Australian clubs? According to the former Down footballer, Collingwood defender and AFL-appointed mentor to this same Irish talent Marty Clarke, the answer is no. 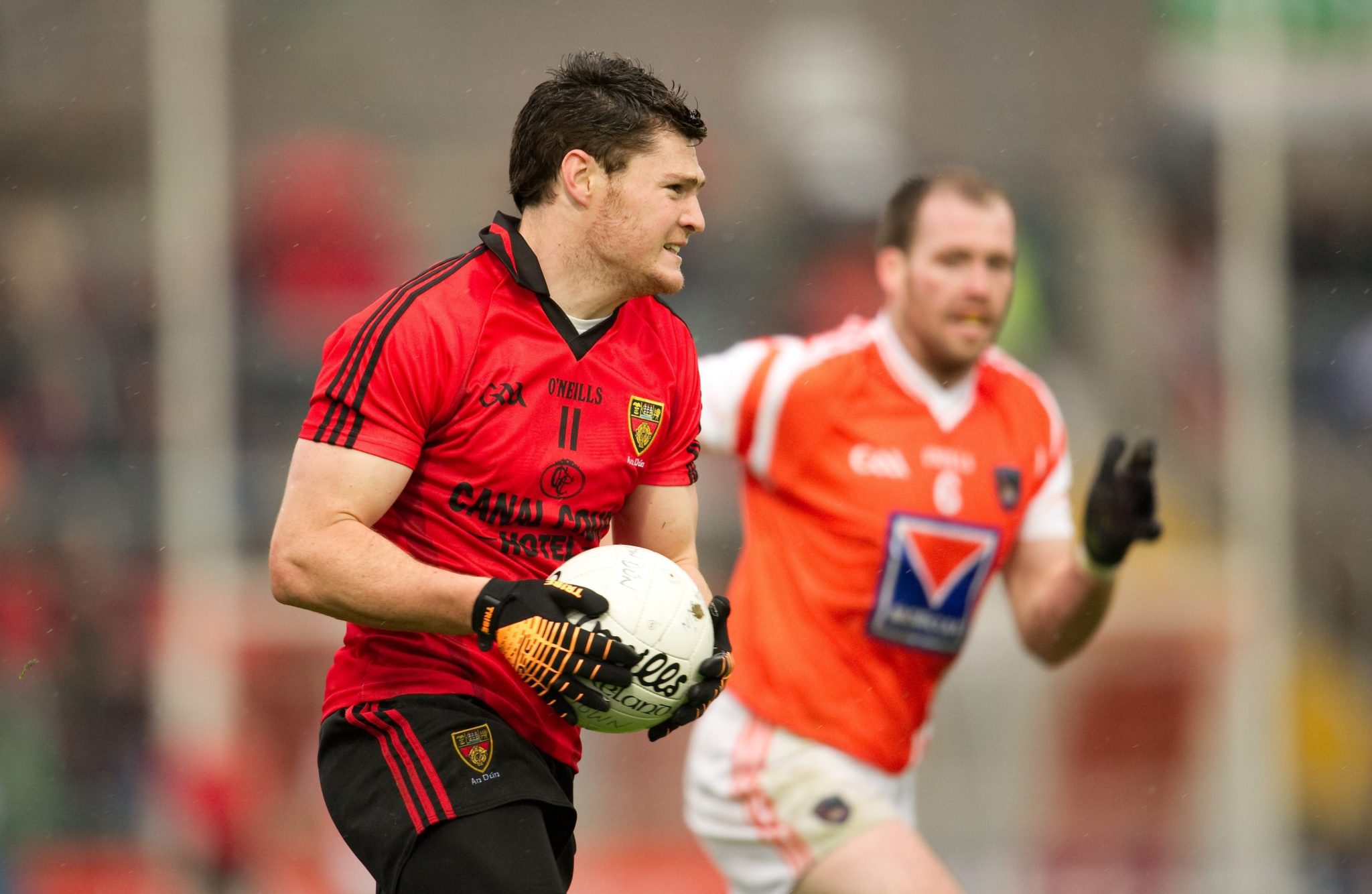 Marty Clarke represents Down during his two-year hiatus from the AFL in 2011. Picture credit: Ray McManus / SPORTSFILE.

Five years after leaving Collingwood and Australia, Marty Clarke has procured an important role in the development of potential AFL recruits here in Ireland. At a distance from the altogether more mysterious role of the Irish-based AFL scouts, it is Clarke's job to work with those who have already been earmarked as players of interest to Australian clubs.

Introducing GAA players to aspects of Australian football deemed desirable by the clubs themselves, these sessions with Clarke are carried out across the year; ahead of the European combine that takes place in Dublin in mid-Winter.

"If they're looking for a speedy half-back who can attack like Jack McCaffrey," explained Clarke to Off the Ball, "then I'll run sessions around those types of drills.

"Some lads are just happy to be there and rub shoulders with their peers, for others this is it for them.

"My role involves developing them and educating them on what the potential opportunity is, and encourage them to get the Australian ball in their hands."

More familiar than most with what AFL clubs are looking for, Marty Clarke, who played over 70 games for Collingwood across two spells with the club, doesn't foresee the introduction of an advanced 'mark' into Gaelic football having any bearing on the recruitment process.

"It will not influence what Aussie teams are looking for," he explained. "I would be shocked if the guys doing the recruiting even notice the rule change.

"What they're looking for is an athlete who can play multiple roles, particularly in the back half of the ground. The last thing they would look at unless it is glaringly poor is the skill level of a GAA lad.

"They're all about looking at physical attributes, a guy who is a great athlete, a good sportsman suitable for a less skilled position."

Confident that their academy coaches can sufficiently shape this raw talent, Australian clubs possess a limited interest in players whose ball-handling skills may well be what sets them apart in Gaelic football. The prospect of both kicking and catching a round ball with supreme skill is unlikely to set one apart if they don't have the physicality to match.

"I personally think they're missing out when bringing in Irish guys in the forward line," admitted Clarke, "but they're happy with what they have there already.

"It is maybe 60 or more Irish players that have gone across and have at least been on an AFL list, but I couldn't name you two who've actually gone in as a half-forward who'd be passing the ball inside, or the full-forward type of position over there who'd be taking a 'mark'.

"If you look at the bigger-name players over the years, Micheal Murphy and Seán Cavanagh were both heavily linked and could have easily gone across. They're big, strong and powerful men who can run all day. They'll have no interest in how a player can catch a Gaelic football unless he was dropping it every single time.

"While I wouldn't say there is no correlation between what the AFL have currently and what the GAA can offer [in terms of attacking talent], it is just that the top Aussie kids are so good at it there isn't really much point in bringing in an Irish guy and training him up." 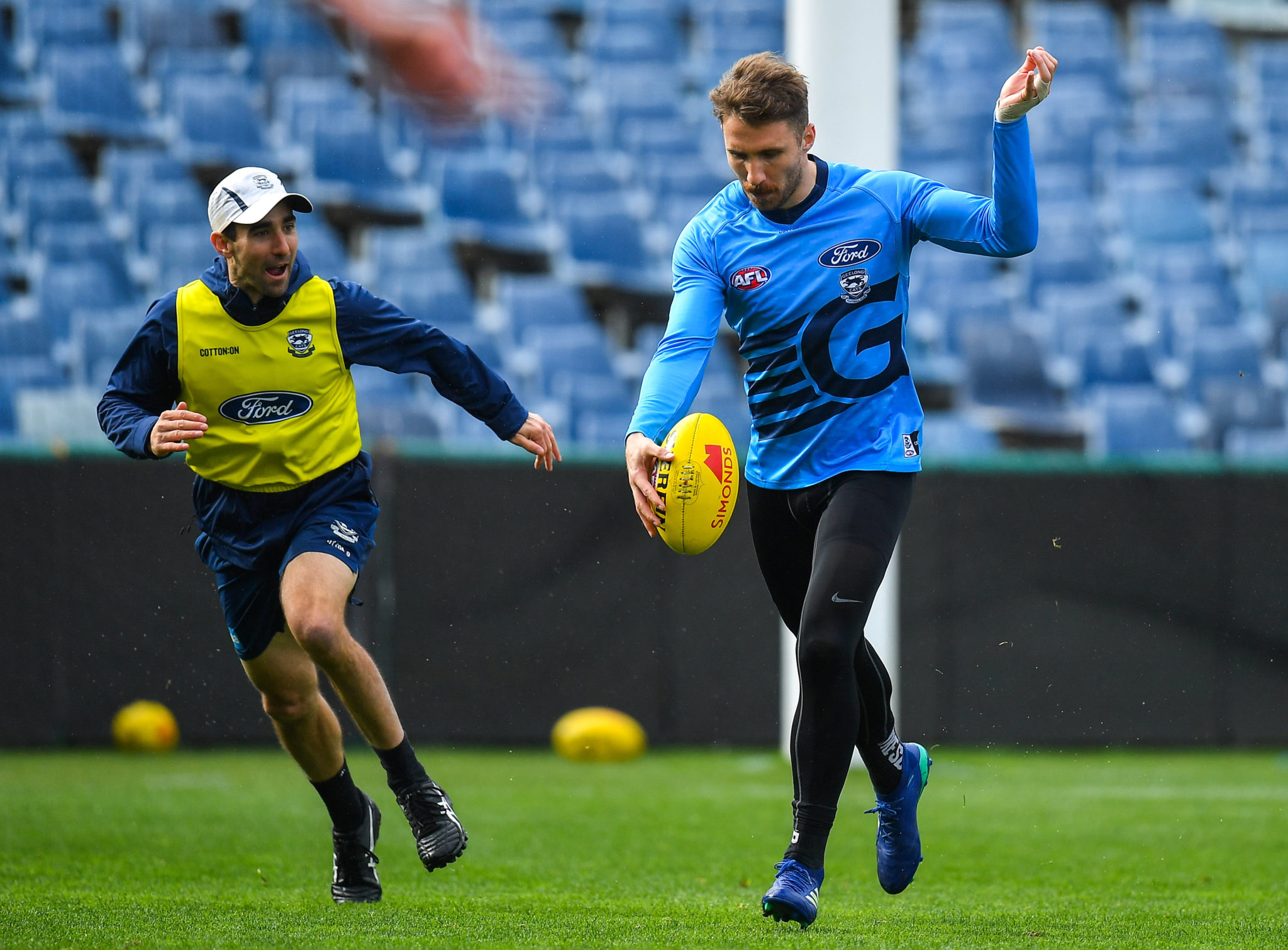 One of the standout Irish players in the AFL, Geelong's Zach Tuohy operates primarily in a defensive role. Picture credit: Brendan Moran / SPORTSFILE.

Limited though the options for Irish hopefuls in an AFL set-up may be by this bias, Marty Clarke doesn't foresee any drop-off in interest for either party concerned.

"It's not costing clubs a whole lot," he explained of the recruitment process. "The Irish lads go in as rookies on a supplementary list.

"Clubs see it as a project where they might get a Tadhg Kennelly or a kid who wants to go home after 12-months, but they's happy to take that risk as getting a 'Kennelly-type' player on the cheap."

Facilitating the whole process are a network of Irish-based scout and recruiters who, as Clarke confirmed, operate in shadowy circumstances, at the best of times.

"They are like lynx," he admitted, "you could go a lifetime without seeing one.

"Individual clubs will pay an Aussie guy married to an Irish person here in Ireland, and they'll tell him to go and watch games all over Ireland. They're looking at a wide spectrum of rugby, basketball is a big one in recent years, and cricket for that elite hand-eye coordination.

"Any given AFL club could contact the network of scouts and say, 'Look, we're after a seven-footer here that we want to use as a ruckman,' and it is up to them then to find that type of player.

"They've really made good strides in the last couple of years to come away from turning up at the doorstep of a 17-year-old in the middle of his Leaving Certificate and filling his head full of dreams. They've come away from that now and there's an age bracket they're looking to hit.

Unlikely to be informed by the GAA's introduction of the 'mark' one way or another, Marty Clarke attested to the voraciousness of these figures when it comes to their search for suitable talent: "If you're putting the work in with your club, eventually you will be seen."

Sligo's Red Óg Murphy was one who left Ireland for the AFL only to return after failing to develop an affection for the game. Read the first interview he carried out upon his return here.