Hailed as the mastermind who halted Kerry's drive for five All-Ireland wins in succession, Eoin 'Bomber' Liston has been speaking about his memories of working with and against former Offaly manager Eugene McGee.

"We were always well aware that any team he was involved with was going to be well-prepared," Eoin Liston recalled of Eugene McGee on Tuesday's OTB AM.

The manager of an Offaly team that upset Kerry's attempt at winning a record-breaking five All-Ireland's in succession in 1982, Liston, who had never previously lost an inter-county championship match, shared his experience of McGee's meticulousness and the dogged determination of the Offaly side he oversaw.

"That Offaly team got to a Leinster semi-final, lost it and then came back and won it," Liston explained.

"That just shows you. He was learning from mistakes and improving the team. He was a superb coach."

Eugene had seen what was working and what we had developed, then brought a variation to it. That was great coaching and the genius that he was. 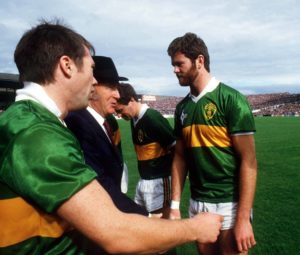 Working under McGee during trips to Australia for what is now dubbed the International Rules Series, Eoin Liston's measure of McGee's tactical ingenuity was piqued years before.

"When we looked back on the [1982 final] and tried to analyse it," Liston said, "it just showed me again that Eugene was such a good tactician."

"A few of the ploys that we had were used against us with just a little bit of variation.

"To give you an example, we had a tactic where Pat Spillane would be gone out roaming and John Egan on my right would go out and we'd create space in one of the corners.

"We'd know then that the ball would be kicked out there and I'd run out and get it before laying it off to fellas coming in.

"They used that same ploy, using Johnny Mooney to go out and collect the ball instead.

"Eugene had seen what was working and what we had developed, then brought a variation to it.

"That was great coaching and the genius that he was."

Another Cork Senior Football Championship game postponed due to COVID-19