Cavan footballer Padraig Faulkner warned Mayo of the difficulty that lies ahead of them against Dublin on Wednesday’s OTB AM.

Dublin will renew their rivalry with Mayo on Saturday, after they beat Cavan in their semi-final two weeks ago.

Faulkner, who was on the pitch when Cavan came up against the Dubs, suggested that Mayo will need to focus on attacking Stephen Cluxton and his kick outs if they are to threaten the defending champions.

“Cluxton was getting a lot out short,” Faulkner said. “He was kind of backing his corner backs who were sitting on either side of the semi-circle.

“It is a dangerous enough kick out, because you obviously now can’t go back to the ‘keeper.”

He suggested that, if he could face Dessie Farrell’s side again, he would have put more pressure on the Dublin corner backs.

“I probably would have pushed another man forward and make them go long more,” Faulkner said.

“We had such big men around the middle third, in our half forwards, our half backs and our midfield, and we were dominating teams this year at the middle of the field.

“So, if I was doing it again, I would try and make him go as long as possible. We probably would have pushed four men into the forward line to stop him getting that little kick out out.”

The fact that Dublin and Cluxton are confident enough to attempt such a dangerous play so often shows the level of trust that each player has in one another, according to Faulkner.

“Even though it is a dangerous kick, he backs his corner backs and whoever pulls into that space so much,” Faulkner said.

“His back is to the play and the first thing he is going to meet is a player, but they have full trust in themselves that he is going to win it and he is just going to turn, and it is an attack on.

“Every time it is a Cluxton kick out, that wee dink just led to another attack. It was a slow build up, it was a slow play, but they just treated it like a brand new attack every time.” 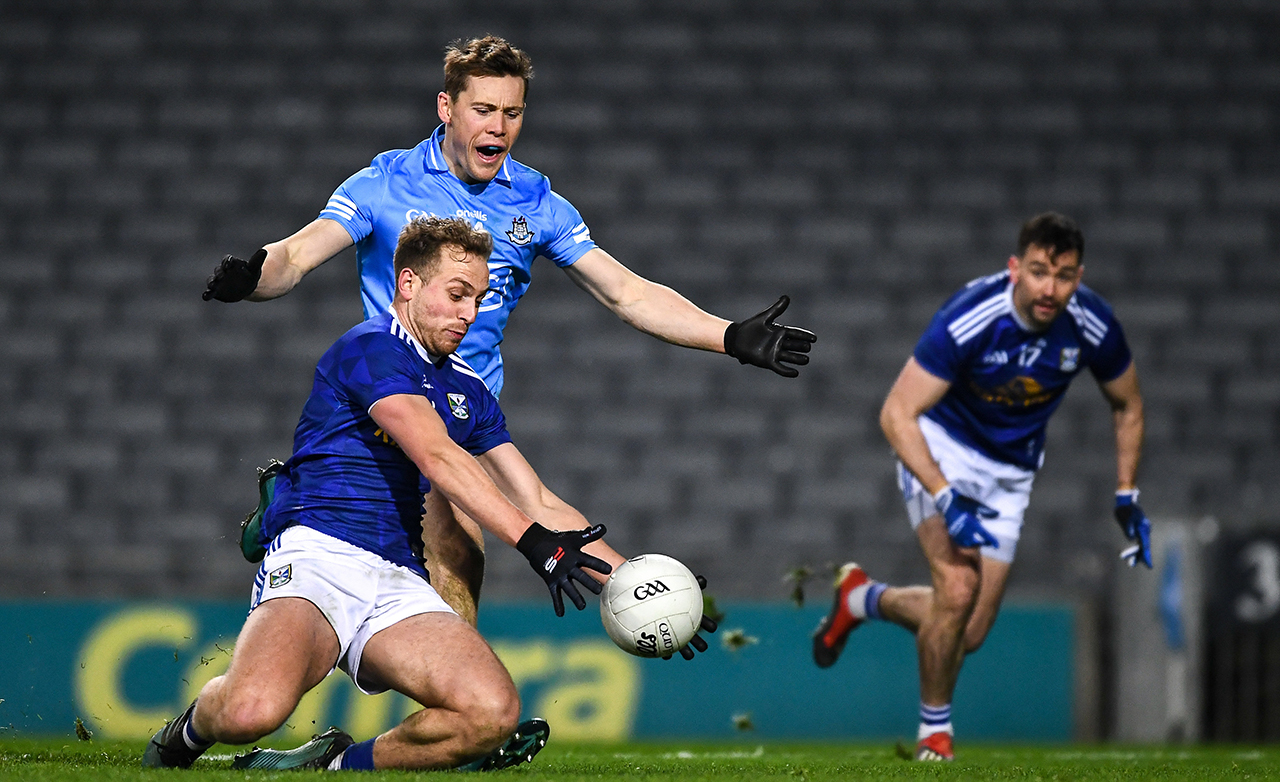 Pádraig Faulkner of Cavan under pressure from Con O'Callaghan of Dublin during the GAA Football All-Ireland Senior Championship Semi-Final match between Cavan and Dublin at Croke Park in Dublin. Photo by Ray McManus/Sportsfile

However, despite the knowledge of the danger that Cluxton poses with his kick outs, Faulkner assured that solving one issue does not mean that Mayo will keep up with Dublin.

Faulkner suggested that Mayo will need to be on top of every aspect of Dublin’s game if they are to be in with a shout.

“If they give Dublin any inkling of a weakness, Dublin will take advantage of that,” Faulkner said.

“When we were playing them, they were five points out of sight. It was always a cushion that we were chasing.

“They got that good start, and it was just always tough; we were just chasing the game.

“When they did get on top, they knew we were going to go for goals, so they just pulled everyone into the middle and every high ball that we were getting joy on in our previous games we weren’t even competing for it.

“They just wanted the ball to break and bodies there. So, their game management is very good.

“They cynical-fouled us as we tried to build momentum, if we got a score, they slowed the game down; it is just something Mayo is going to have to [look out for].”

What makes Dublin so difficult to beat, according to Faulkner, is that all of their players are able to pick up the slack, meaning that nullifying one of them only opens up space for another.

“Someone said to me during the week that it was like playing a game of whack-a-mole,” Faulkner said.

“You curb the influence of one or two, and another three or four pop up. It is very tough to manage a game like that.”