Brian Fenton is the key player for Dublin, but they need to find a defensively-minded midfield partner for him, according to Paddy Andrews.

Kerry came from seven points down in the first half to earn a 4-9 to 1-18 draw against the defending All-Ireland champions on Sunday.

While Dublin’s full forward line were, as expected, in full flight, the manner in which the used Fenton was not what has come to be expected from the Dubs.

Former Dublin footballer Andrews spoke to OTB Sports after the match, and broke down the different role that Fenton played for the Dubs.

“He seemed to play a little bit further up the pitch,” Andrews said. “It was interesting, and probably a blow to Kerry, that Jack Barry wasn’t able to play.

“They have had some great battles over the last couple of years, but [Fenton] is such a key player for Dublin, he is so key in their transition.

“[It was] probably a quiet enough day for Fenton by his high standards, and Dublin would have wanted him to get on the ball a little bit more, particularly in the second half.

“But it shows that if Kerry can get a plan for Brian Fenton and try to tie him up, it does take a huge thing away from Dublin going forward.” 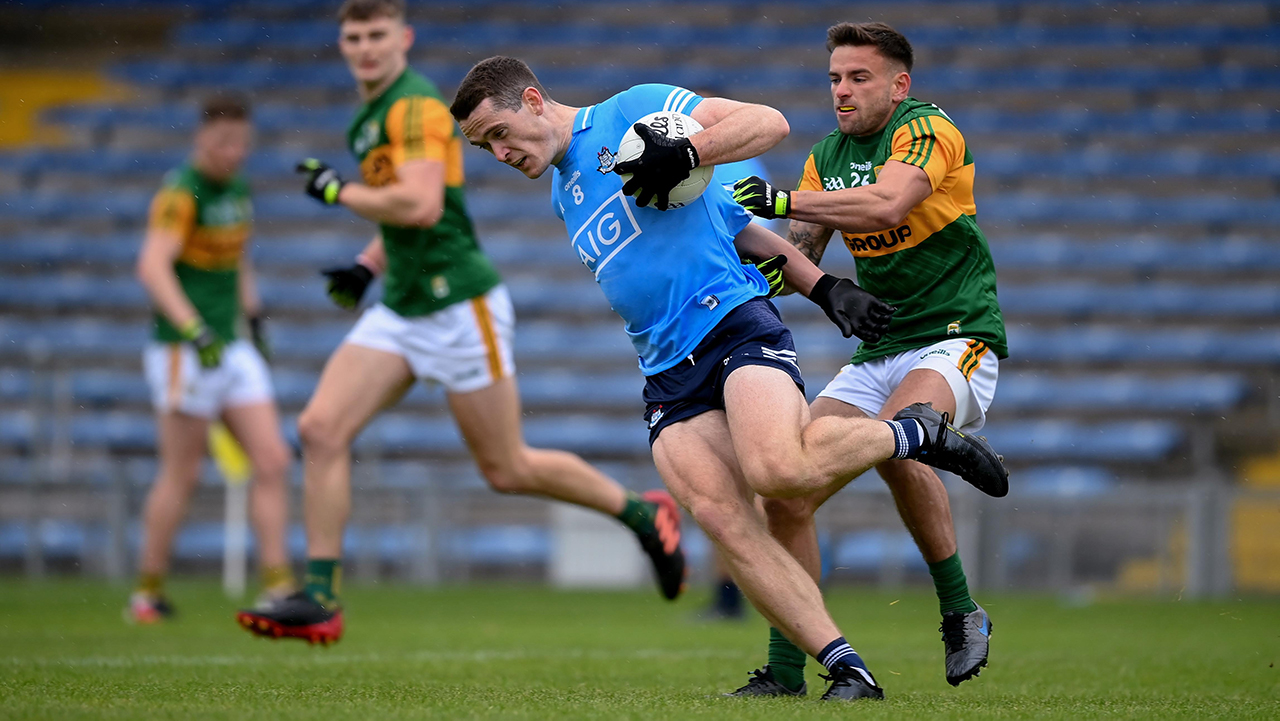 Brian Fenton of Dublin is tackled by Micheál Burns of Kerry during the Allianz Football League Division 1 South Round 2 match between Dublin and Kerry at Semple Stadium in Thurles, Tipperary. Photo by Stephen McCarthy/Sportsfile

While Tom Lahiff did well in the role against Kerry, Andrews is not sure if Dublin have found the replacement for Michael Darragh McAuley in the midfield alongside Fenton.

“It is hard to know [who to partner with Fenton],” Andrews said. “That is the Dublin team; you can probably name 12 or 13 of their starters straight off the bat.

“There is a gap for someone to play midfield with Brian Fenton, particularly with Michael Darragh MacAuley stepping away.

“James McCarthy has gone in there and played in the past; he is probably more comfortable playing in the half backline as well.

“There does seem to be a spot beside Fenton.”

Fenton’s altered role on Sunday took him off the ball, meaning that he was not able to score the usual number of points that he has become accustomed to.

“Ultimately, if you are Dublin, you want Brian Fenton roaring forward,” Andrews said. “He is scoring three or four points a game.

“Whoever plays in that role beside him has got to be more of a defensive style of player.”

Andrews believes that Dublin will be making some changes as the season continues until they have found that player to fill that gap.

“I thought Tom [Lahiff] did quite well today, but I do think it is a position that is up for grabs,” Andrews said.

“Dublin are trying out two or three different midfielders, I know that they have new players in the squad as well, but that is definitely an area where Dublin are looking for someone to put their hand up.”